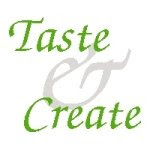 For this month's Taste & Create I was paired up with Jescel and Joseph's blog Spice Of Life. Whew! A lot of yummy looking things to try on that blog. I settled on one of my favorite foods that I rarely have: Steamed Buns! I love steamed buns, but have only had real fresh made ones once, at one of those giant oriental buffet places. I've also gotten them frozen, and while those are pretty good, they are nowhere near as fantastic as fresh ones, which are simultaneously fluffy and chewy, sweet and savory. So to be able to make my own steamed buns was on my to-do list.

This, of course, was a weekend project, as I had to make, what is essentially, real bread dough. With yeast and everything! I am so scared of bread-making, although I have had success before, making naan. There is so much that can go wrong. Will it rise? Will I over or under knead it? Luckily, Spice Of Life provided a very good recipe and instructions. My big white ball of dough rose as I wanted, and was easy to roll out and it sealed really well.

Since it was my first time making these, I chose to only do one of the fillings. And since we've had ground pork-filled baked goods already this week, I chose the chicken filling. Can I say that this was the first recipe I've ever used an entire bunch of green onions for? That impressed me for some reason. Usually you use one or two onions, and the rest are stuck back in the fridge to be forgotten. Anyway, the filling was quite sweet, but so good. The flavor is hard to describe...Jack said that it's very "Asiany." So there you go.

Like I said, the dough was easy to work with. It was elastic, yet rolled out into discs very well. Sealing the buns is easy. I simply pulled up two opposite sides and pinched them together, then the other 2 sides, then the 4 corners, so it was like a little sack that you have cinched with a rope or something. Then I gave the top a purple nurple. Voila! An adorable package of dough and meat, ready to be steamed.

I don't have a steamer, bamboo or otherwise, so I put the buns, 3 at a time, in a steamer basket set into a pot of simmering water with a bit of vinegar (The vinegar was a tip from Spice Of Life...it helps keep the buns snowy white). This baking by steam is what makes these buns so unique from any kind of baked goods I ever had growing up. The dough gets fluffy, like bread that we're used to, but it has a delicate chewiness and slight stickiness that is divine.

Of course, Jack, who I'm starting to think was a state-fair cook in a former life, decided he had to try and fry one of my buns. Well, he fried two, actually...one uncooked one and one that had already been steamed. The uncooked turned out chewy and slightly doughy, while the steamed one was fluffy yet greasy, and reminded me of a funnel cake. Both were good, of course (they were deep fried for gosh sakes! how bad could they be?), but we'll stick to just plain steamed.

All in all, I am most pleased with the results. The Siopao were some work, but nothing too hard, and they are so completely worth the effort. The recipe makes 10 buns, and they are about baseball sized, larger than I expected. I can't wait to do this again, and play around with different fillings. Thanks, Spice Of Life!!

Here are the recipes, copied directly from Spice Of Life because hey! They worked so well! Go to the entry for the pork filling recipe, which looks awesome, and the story of Siopao!

1. Combine warm water, sugar and yeast in a large bowl; let stand 5 minutes or until bubbly. DO NOT stir.

2. Spoon flour into the measuring cup and level with a knife. Add flour, oil and 1/4 tsp salt into yeast mixture. Mix well until soft dough forms.

3. Turn dough out into a floured surface. Knead until dough becomes smooth and elastic (about 10 minutes). Form into a ball.

5. Cover with a clean, damp kitchen towel and let dough rise in a warm place (about 85 degrees F), for 2 hrs or until doubled in size. (Gently press two fingers into dough. If identation remains, dough has risen enough.)

7. Divide dough into two equal portions. Form one portion into a 10-inch log, and then cut into 5 equal pieces. Form each piece into a ball. Working with one dough ball at a time roll ball into a 4-5 inch circle. Make sure to cover remaining dough to keep them from drying.

8. Place about 1/4 cup of filling in the center of dough circle. Bring up sides to cover filling and meet on top.

9. Pinch and seal closed with a twist. Repeat procedure with rest of the dough.

1. Place chicken breasts in a pot. Add enough water to cover. Add dash of salt and pepper. Bring to boil. when boiling, reduce heat and allow to simmer until chicken is tender. Remove from water and let chicken cool.

2. When chicken is cool enough to handle, take two forks and shred the chicken into strips. Set aside.

3. Heat oil in a skillet. Saute onion till tender, then add garlic. Then add the cooked, shredded chicken and the rest of the ingredients.

4. Stir to mix and simmer for 2 minutes, or until bubbly.

5. Remove from heat to cool.

Steph... I am so sorry that I haven't been able to do anything, as you are well aware of my plight right now. I actually have already picked out something from your blog to do, but the call from the Philippines came... I will promise that I will make it up to you later. I will for sure do that recipe which I've already picked out and let you know about it later... by the way, i'm glad you tried the siopao and liked it.. and frying the bun was genious..i'm gonna have to try that!

The buns look delicious! Soft and fluffy, like real siopao buns are. Of course, frying the buns is a brilliant idea.