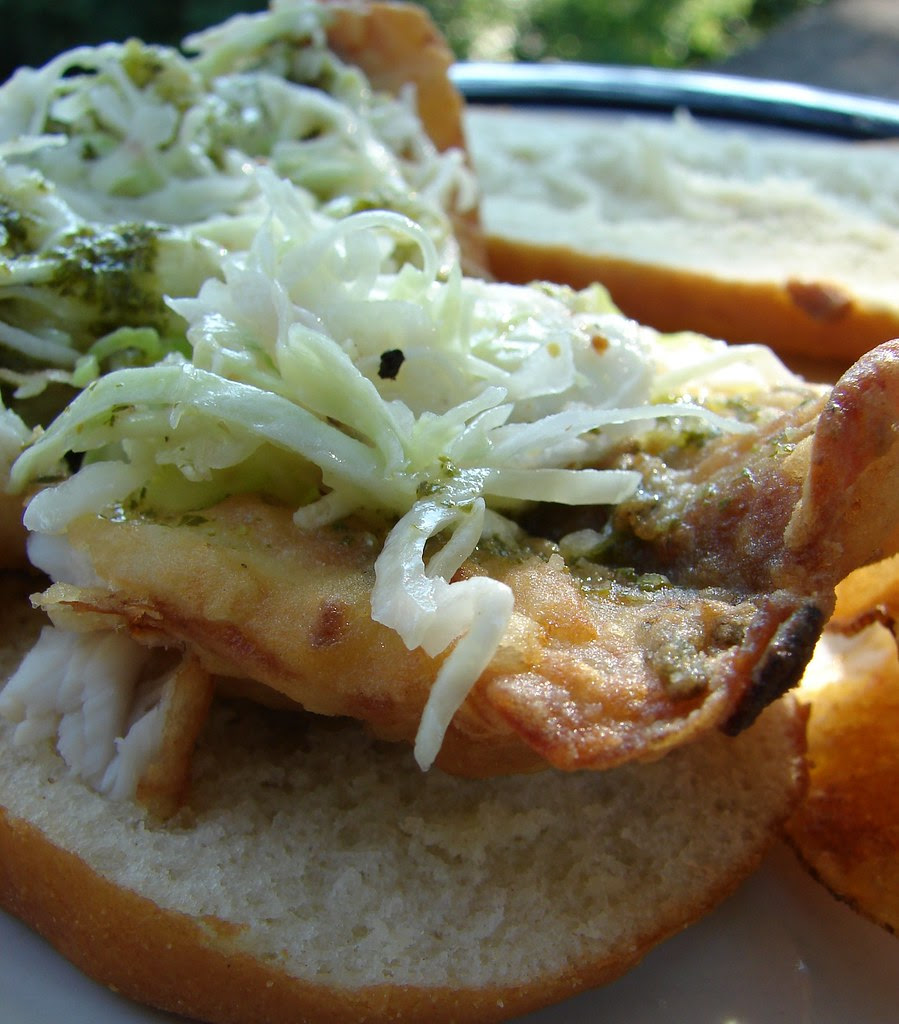 In honor of Shark Week...well actually it just sort of happened that way...Jack made Bake & Shark sandwiches. You may recognize the Bake & Shark from the Trinidad and Tobago episode of Bizarre Foods with Andrew Zimmern:

Here's how our Bake & Shark adventure started...Jack decided a couple weekends ago to try his hand at making doughnuts from scratch. I know, he's a crazy person. He used Alton Brown's yeast doughnut recipe, and filled most of his creations with jam. A few, however he left unfilled, and they were good like that...not very sweet at all. I suggested he try some left over Mexican pulled pork I love my crock pot!!) on it, like it was a sandwich bun. And that totally worked. Yum! That's when Jack remembered the Bizarre Foods episode. I think it stuck in his mind because Zimmern was so taken with the Bake & Shark...he said it was one of his favorite sandwiches ever. 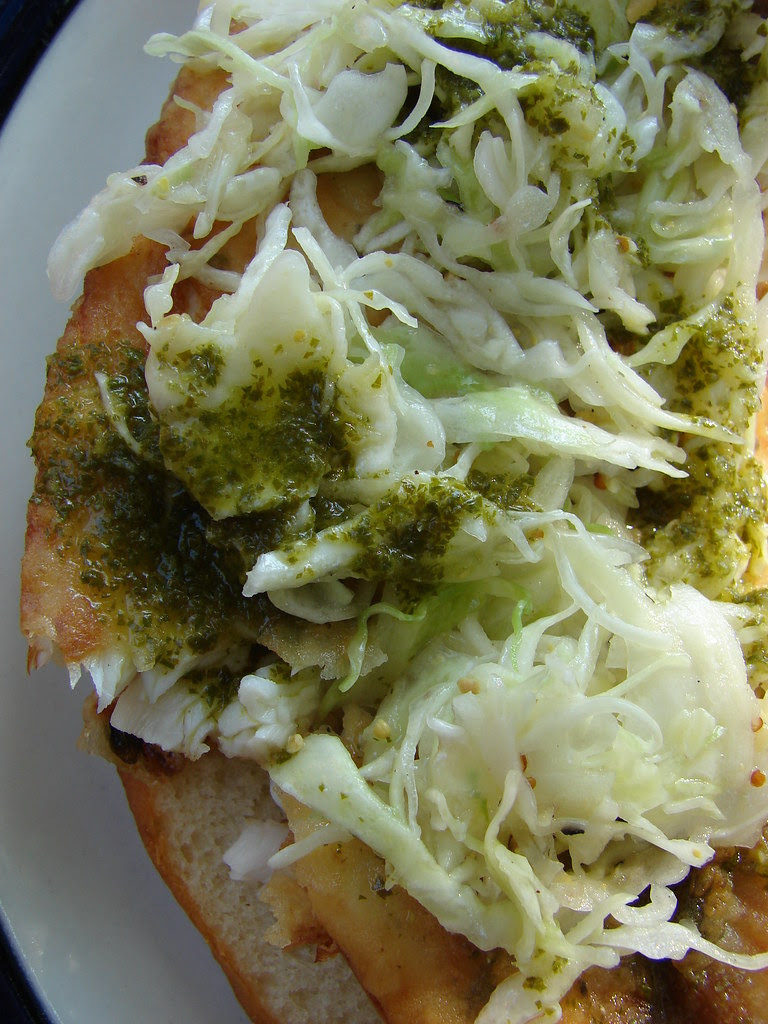 Jack did his research, and found a couple recipes to make authentic Bake & Shark, and the Shadow Bennie sauce that is often put on these sandwiches. We invited my brother and sis-in-law over and went shark shopping...well, we settled on Tilapia instead. And yes we have seen the episode of Dirty Jobs about Tilapia eating other Fishes Poo. It still makes a darn good sandwich.

On Bake & Shark night, Jack made the "Bake" using Alton's doughnut recipe again, minus the eggs and subbing oil for Crisco. Once the dough rose once, He shaped them into oblong rounds that would perfectly accommodate the tilapia fillets. Those rose some more, and then they were deep-fried. They were not quite as flavorful as the first doughnuts he made, but for a sandwich vessel, they were fab. 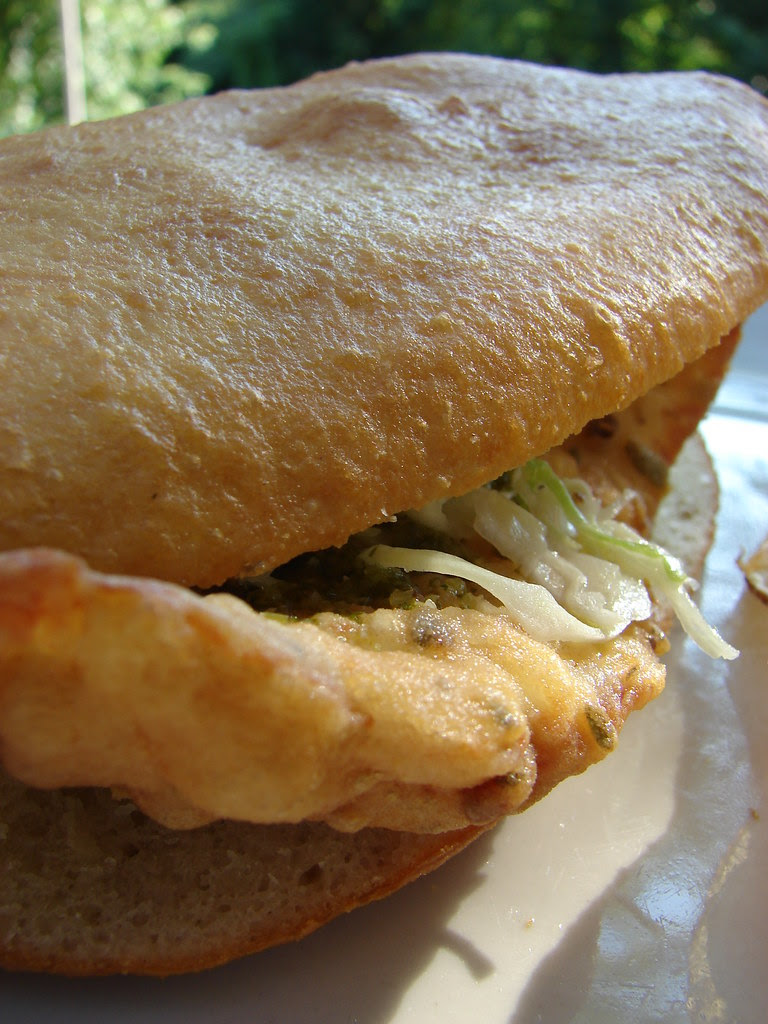 Here is how we made the rest of the Sandwiches:

Coat the tilapia with lime juice, garlic and thyme. Let sit for about 5-10 minutes. Dredge lightly in flour, then deep fry immediately until golden brown and delicious. Season with salt and pepper. Put it onto a Bake that's been sliced horizontally, top with a simple coleslaw (shredded cabbage, white wine vinegar, salt, pepper) and some Shadow Bennie Sauce (recipe below) and/or any other toppings of your choice (some things were used that night...mayo, pepperoncini rings, pickles). Make like a shark and tear that bad boy up!

Mix it all up, let sit for at least 2 hours. Slap it on that Bake & Tilapia!

These were a hit. I love the idea of a fried bread as a bun. It's kinda decadent, and totally fun. The fish was flavorful, the sauce was tangy and spicy and the coleslaw gave it a fresh crunch.
Posted by ironstef

The Shadow Bennie sauce required two things that I was not able to obtain: chandon benit and congo peppers. I did some research and found that chandon benit (roughly pronounced "shadow bennie") was similar to cilantro and that congo peppers were in the same family as habaneros. I used serranos only because I could not find habaneros at the store.

For the "bakes" I had to leave out the eggs and substitute oil for shortening in AB's doughnut recipe only because I forgot to get them. If I had them on hand I would have made the "bakes" using AB's recipe as is, minus 1/2 the sugar and nutmeg. Many the recipes for "bakes" I came across in my research used simply flour, fat (butter or shortening), baking powder, salt, and water to make the dough. Not having tried this, I imagine the dough would be similar to a sturdy biscuit dough and would result in the "bakes" having a biscuit-like texture upon cooking.

Hey there guys,
I've been looking at your blog recently and was very excited to come across this post as I'm from Trinidad, and LOVE my bake and shark. The bake looks like a pretty good approximate to our bake... ours are not at all like a sturdy biscuit but are crispy on the outside and light and fluffy on the inside.
Chadon beni is hard to find in the States, I live here now and have only recently begun seeing it at Vietnamese restaurants when I order pho. (I'm planning to make friends and source some to grow myself) Jack is right, it's a lot like cilantro, but much more potent. And Jack is also right about the habaneros!
Too bad about not finding the shark... tilapia is good, but keep looking because there's nothing like it.
Congrats on the dish though, because for something you've never eaten, it looks like you did an awesome job at recreating it!

Regarding Shadow Bene, you have to go to spanish areas and it is called Recao or Mexican Cilantro or Culantro. It has a broader leaf. Congo peppers are also known as scotch bonnet peppers. In New York I find the in Chinese veg. supermarkets and they are called 'Jamacian Hot'. I can never find any of these items in Whole Foods, Shop Rite or Pathmark