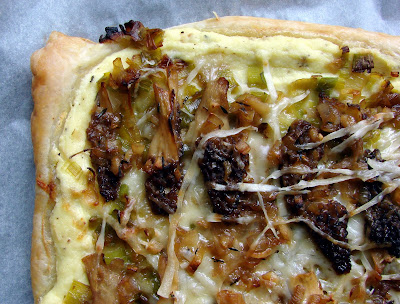 It's morel mushroom season!! If you are not familiar, morels are wild mushrooms that come out for maybe a month-month and a half every spring. They are serious business... morel hunters have their spots and they are very secretive about them. At markets, morels fetch big bucks... like $40 a pound and more. I've tried morel hunting once, last year. It was terribly unsuccessful, resulting in getting really lost, finding a spooky old graveyard, and waiting for an hour by the side of a car-less two-lane road for my friends to find us. 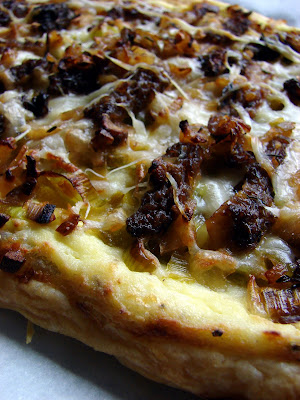 Luckily, I have friends who have morel luck. And these friends are generous, and apparently like me. Kelly and Jerad left me a morel they found in their yard when I was dogsitting for them. The next day, a friend at work gave me 5 or 6 morels he had found. So I had a small, precious baggie full of morels... most likely the only morels I'll get this spring. How to use them best? This is the pressure of these elusive fungi. You want to honor their smoky, earthy flavor and not waste one nibble. But simply frying or sauteeing these 6 or 7 shroom treasures would not allow me to share. I decided to stretch the flavor with a rich yet springy tart.

This turned out to be a great way to eat morels. The sweetness of the caramelized leeks and the creamy cheeses highlighted the smokiness of the mushrooms, really bringing out their best. And it was a nice, filling dinner for two! 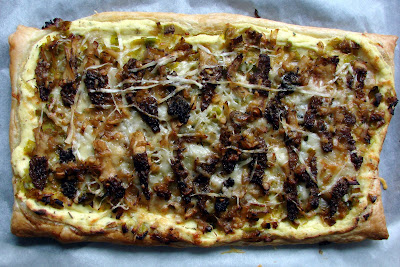 -Cook the leeks in the butter over medium or low heat. Cook slowly, allowing to soften completely and bet slightly golden brown, about 20-25 minutes, adding a couple tablespoons of water when needed to help soften and keep moist. Set aside.

-Cook the thyme, garlic and shallots in the olive oil until starting to soften. Add the morels and gently stir and toss to combine. Cook until everything is softened. Set aside.

-Combine the ricotta, egg yolk, thyme and salt to flavor. Fold the sheet of thawed puff pastry in half to form a long rectangle on a cookie sheet lined with parchment paper. Roll out into a larger rectangle, about 7" by 12". Dock the center of the rectangle with a fork, leaving about an inch of undocked pastry on all sides.

-Bake in a preheated 400ºF oven for about 20-25 minutes until pastry is cooked and cheese starts to brown. Let cool for about 7-10 minutes, slice into squares with a pizza cutter, serve warm. 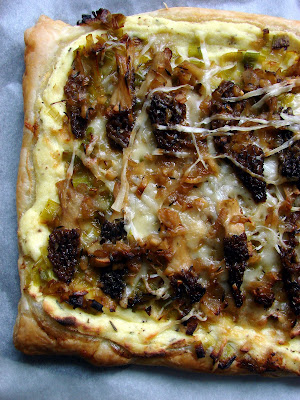 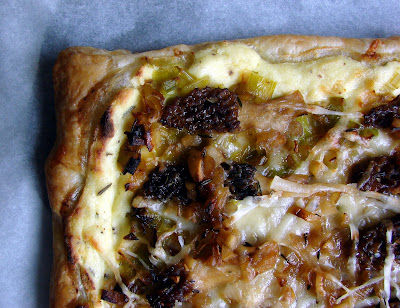 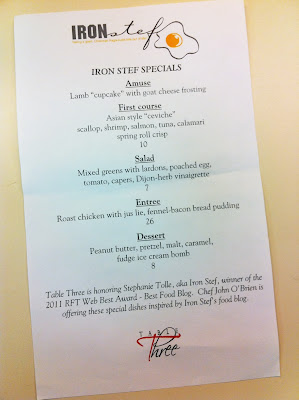 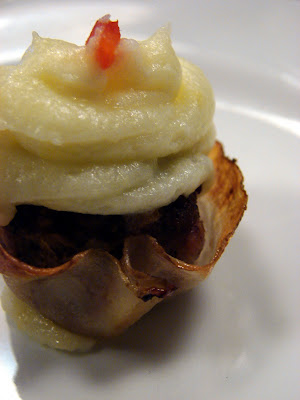 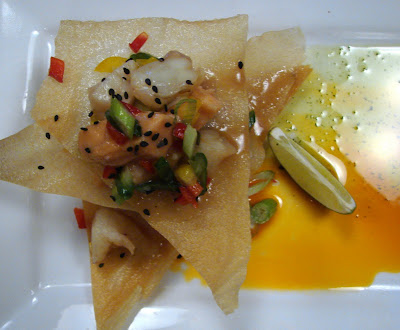 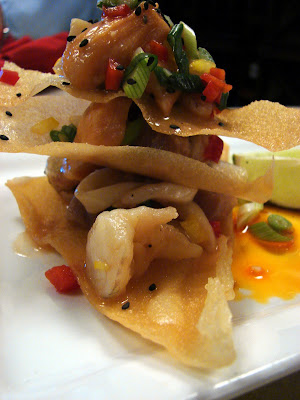 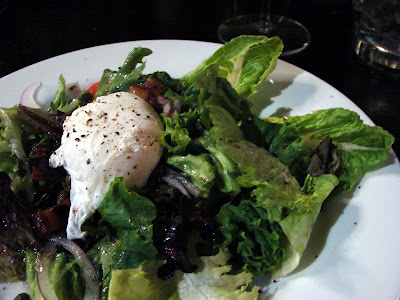 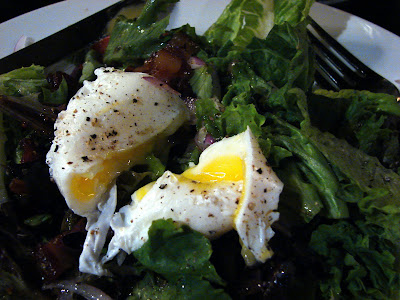 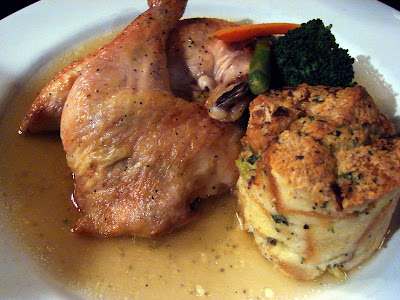 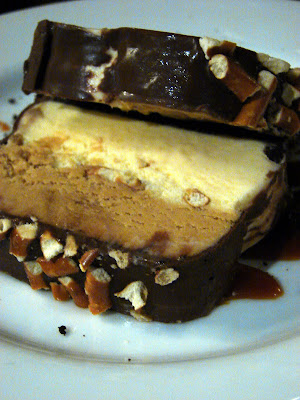 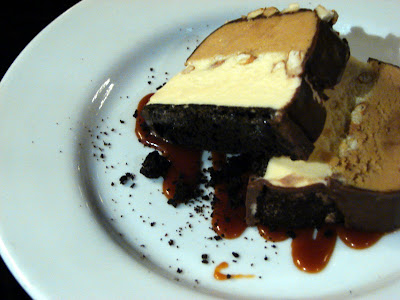 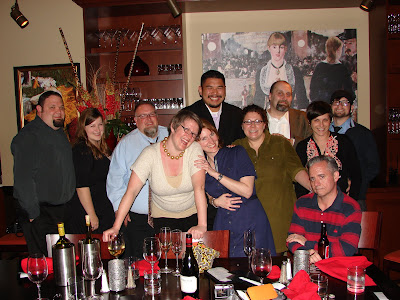 Speaking of the bomb, these are my friends who dined with me (minus Kelly who left earlier because she had to teach in the morning). I love them all! Thanks, guys! And thank you John & Cathy and Table Three! I am not worthy, but I am so glad this happened :)
Posted by ironstef 4 comments: 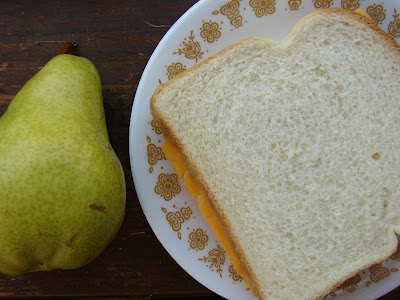 My maternal grandma died Friday evening. I am crushed, to say the least. She was an amazing amazing woman. My grandpa died when I was 12... also an incredible human being. Together Patricia and Louis built quite the legacy. 12 kids, 27 grand kids, 5 great-grand kids, and some on the way. All together the count of people who would not be on this earth if it weren't for my grandma and grandpa is 47. And this number is constantly growing. It's awe-inspiring.

What's more impressive is the fact that all of these people are GOOD, loving people. This has to be because my grandma was one of the most patient, saintly, loving people to ever walk this earth. She was also very smart. I had the privilege to live with Grandma for about 6 months when I was 19-20. I am so thankful to have had this opportunity to get to know her as a human being and a friend.

It was suggested that I do a post to honor her... write about "Grandma's cooking." The truth is, my grandma was not a typical home-cooking kind of grandma. She cooked, of course, as she had to feed 12 kids on a budget. But growing up, the foods I remember her making were seven layer salad and jello cheesecake for family parties. When I lived with her, we had crock pot pot roast flavored with dried onion soup 2 days the very first week!

Thinking back, the food from Grandma and grandpa's house that makes me most nostalgic is cheese sandwiches and pears. I looooved pears when I was a kid, and grandma always made sure to have some on hand when I was visiting. The cheese sandwiches were simply Colby cheese on white bread with yellow mustard. Why was this so special? Because at my house we always only had American cheese, which I despised, and wheat bread. And no, this was not grilled cheese. I was a weird kid... no melted cheese.

So, yeah... that's it. Simple foods that are part of some really really happy memories. I am so thankful that there are so very many such memories, and so much love, to get my family and me through this great loss. Goodbye, Grandma. I love you!
Posted by ironstef 4 comments: