It's grillin' season! Yay! The other day Jack cleaned up the grill, oiled and seasoned it and got it all ready for spring/summer grill-o-rama!

I just finished reading Food & Booze, which I mentioned here. It's an awesome book, by the way. I had gotten it from the library, but I'm now going to buy it. Each essay has a recipe with it, so it's like you get a whole background story to each recipe. Awesome. Steve Almond's contribution was about grilling, and concluded with a chicken salad recipe that I will be trying this summer. Here is an excerpt from Almond's essay, "My Soul Upon the Grill:"

Specifically, I’ve developed certain spiritual ideas, emotional biases, what my analyst would term – if I ever spoke to him about the grill, which I do not – an ideological fetish.

It begins like this: Human being are inexorably drawn toward fire, which has, for most of our formative evolution as a species, been the fundamental source of warmth, safety, and nutritional gratification. Stoves are, in the grand scheme of things, an infantile domestic prop. (I shall not even begin to express my contempt for microwaves.)

The sensual signifiers of fire – the orange snap of the flames, the smell and taste of the smoke – are hardwired. It is for this reason that cooking over a fire, which most of the world still does, triggers certain vestigial limbic impulses, in my case a desire to lick tendrils of grease from the grill.
Steve Almond, My Soul Upon the Grill

Here are some recipes for grilled stuff that I hope to try:


And to help us get into even more of a grilling mood:

-Alton Brown's Grilling Essentials Kit. I think this is a great deal!
Posted by ironstef No comments: 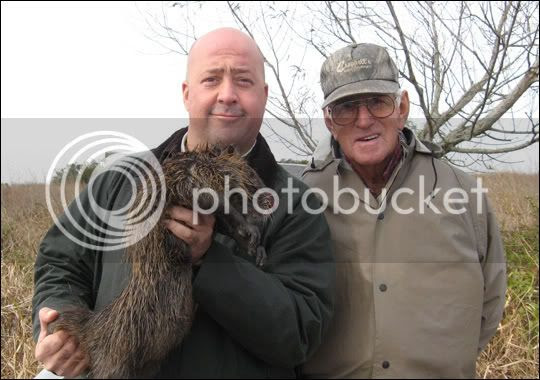 Last night I watched Bizarre Foods with Andrew Zimmer on the travel channel. This is a good show, for the most part. I watch it every week. This episode found him along the Gulf Coast. It was a little more exciting for me than other episodes, because I have a better chance of traveling to these destinations. I doubt I'll ever make it to the Philippines or India (although I would really really love to). But Southern U.S.? I might be able to swing that.

What you see in the picture above is Andrew and a hunter with a Nutria. It's a kind of water rodent. Coincidentally, CHOW just had a little blurb about a very similar looking creature called the Capybara that is commonly eaten in South America. I thought the Nutria and Capybara might be related...they look alike and all, but they are from different animal families. Anyway, the Nutria sounded pretty tasty...I think Andrew described it as if a chicken and a rabbit mated, that's what the offspring might taste like. Here's some Nutria recipes.

In Mississippi, Andrew went to a down-home soul food/BBQ place called Leatha's. He was there with a member of some Southern Food preservation Society...I think it was the Southern Foodways Alliance? Maybe? Anyway, at Leatha's they cooked up some Raccoon and Possum for them...Andre ate it and liked it. He said the Raccoon tasted a lot like dark meat turkey, and wasn't nearly as oily or gamey as he thought it was going to be. The Food society guy was like, "I'll take your word for it." Huh? A guy who's trying to promote traditional southern cooking, and he won't even try the possum and raccoon? That bothered me.

Some other things he tried on his trip that are on my list of foods to eat before I die: Alligator, Chitlins, squirrel (the Nutria hunter snuck it into his Nutria stew as a surprise) and turducken. I'm gonna have to try and catch this episode again, because I channel surf too much, and do dishes and such during commercials, so I missed some parts. I saw him eat the Mullet roe though. Deep fried mullet roe. Apparently it's an acquired taste. eek.

my 2 favorite new ways to use olive oil

Ever since I was a tween, I've bought exclusively "oil-free" face washes. I have oily skin, you see. So that made sense to me. It's never really helped, of course, but I didn't know what else to do. Last week I started a new routine which sounds absolutely crazy. The Oil Cleansing Method (OCM). Basically, you mix castor oil and olive oil (see? food related!) and rub that all over your face instead of washing it with soup (ha ha! I meant soap of course, but I'm leaving my typo because it makes me laugh. Soup on the brain!) and water. You the place a hot wet washcloth over your face until it cools, then use the cloth to wipe away all the oil. I've been at it for almost a week and have had no breakouts! I had a couple zits, but they pretty much disappear in a day! Who'da thunk it? Olive oil is not only delicious and heart healthy, it's good for your skin...even if you have oily skin!!

Now for the edible side of olive oil. So, say you're having a dinner consisting on french bread, olive oil, salt and pepper, with some meats and cheeses. Say You're full of the meats and cheeses but you still have some bread left. And you spot a bite size dark chocolate within arms reach. Here's what you should most definitely do....dip your bread in the oil/salt/pepper, warm the chocolate with your hand a little, put it on the oily bread and eat it. You will be a very very VERY happy person. Talk about foodgasm. *melts*
Posted by ironstef No comments:

note to self: try these

Here's some recipes I've collected over the past few weeks that I absolutely must try. Soon.

Mummy's Brown Soda Bread. I'm thinking this with a roasted chicken and that acorn squash above...mmmmm.


And as a non-recipe aside, here's what I had for dinner last night: 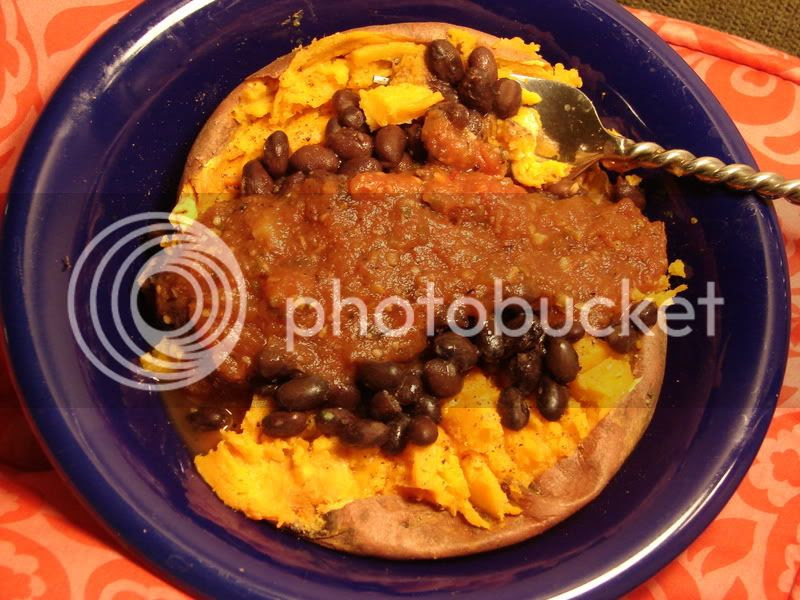 It's a baked sweet potato topped with black beans and salsa (specifically Frontera/Salpica Tomato Jalepeno salsa....highly recommended...those Frontera products always seem to be good.) So simple. So fast. So Healthy! Very filling and comforting. I think I'll do it again tonight...
Posted by ironstef No comments:

I made some sweets for a co-worker who's gettin' hitched in Vegas. The Naughty Butt Cookies (later renamed "yummy butts") were a hit. I just used a sugar cookie mix (I'm very lazy when it comes to baking) and used a heart-shaped cookie cutters and cut of the tips to get the shape. Some strategically placed frosting, and you have some sweet asses! These were about the most fun thing I've ever baked. I was giggling and making jokes throughout the whole process. I will be making them in the future for just about every occasion possible. 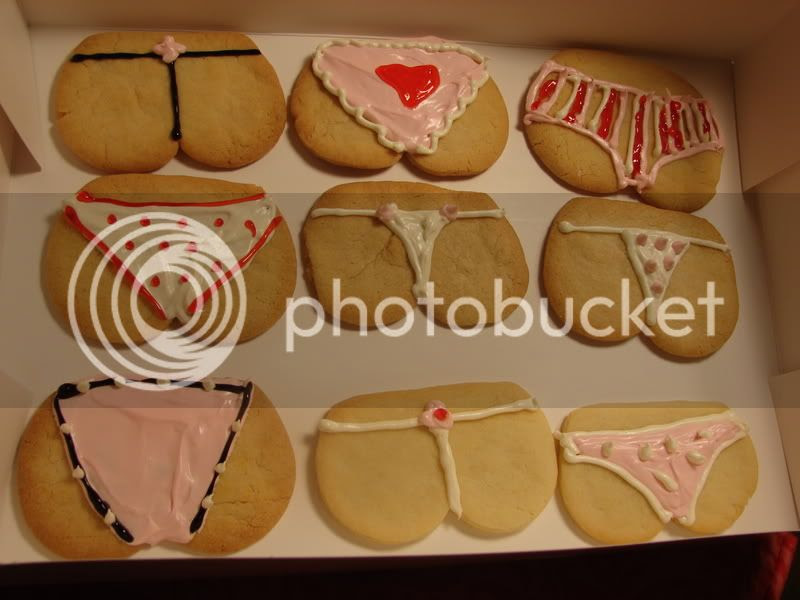 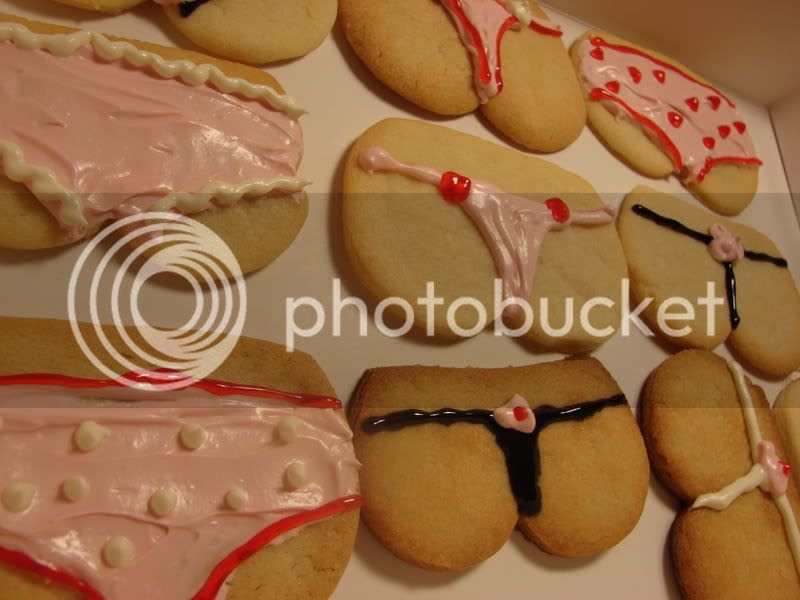 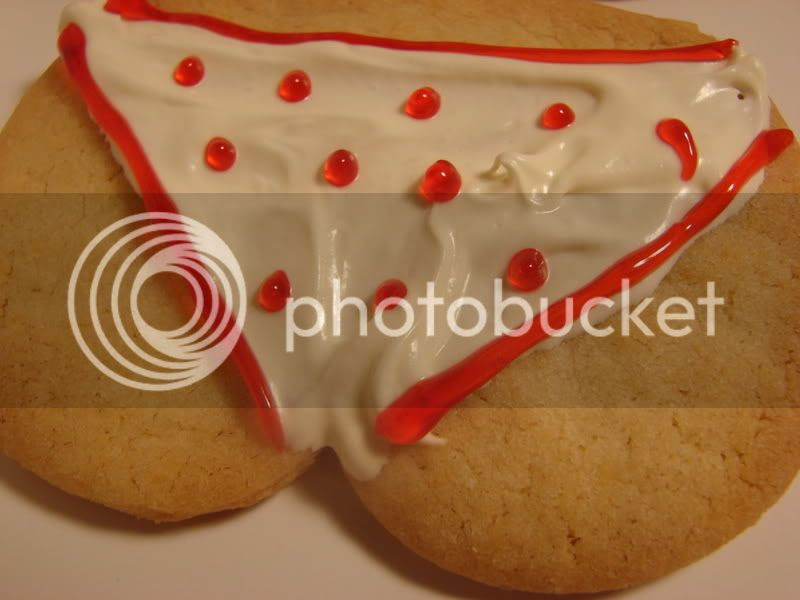 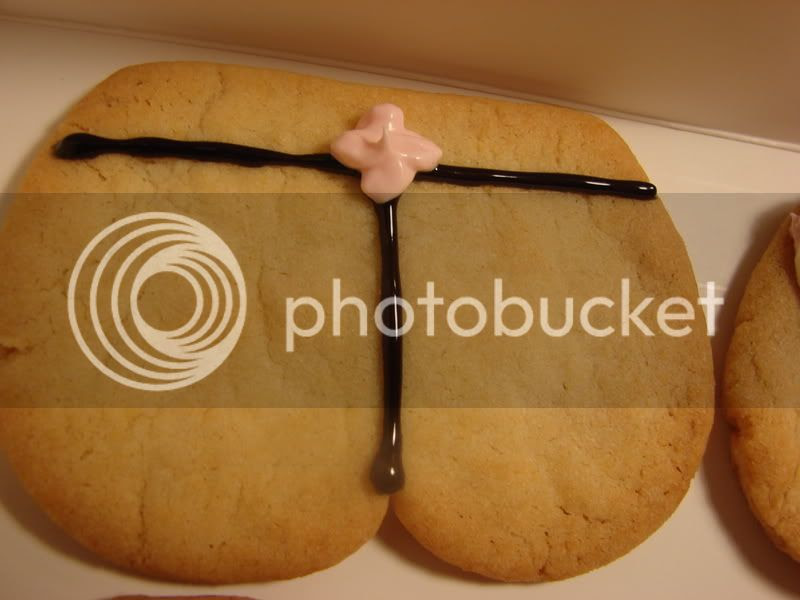 I also made these much more tame cupcakes. They didn't turn out as pretty as I wanted, but people thought they were cute, and they fit the theme of the shower. 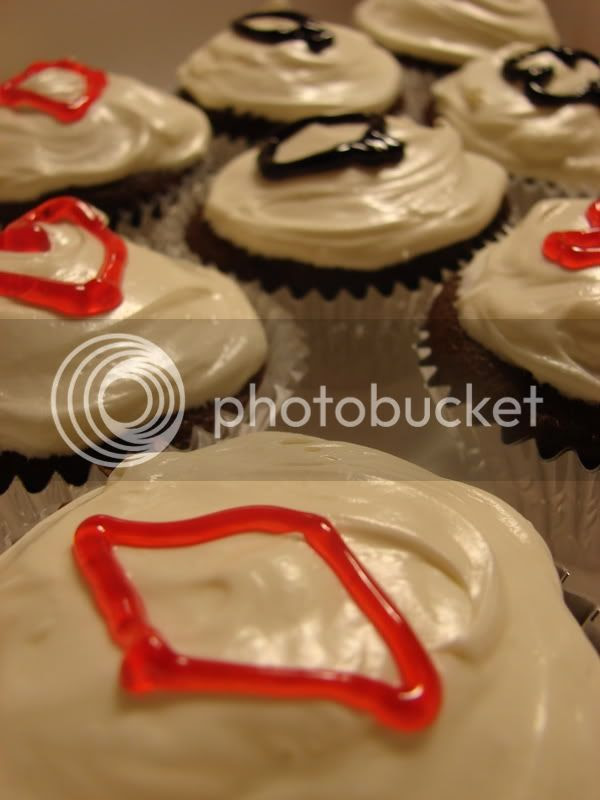 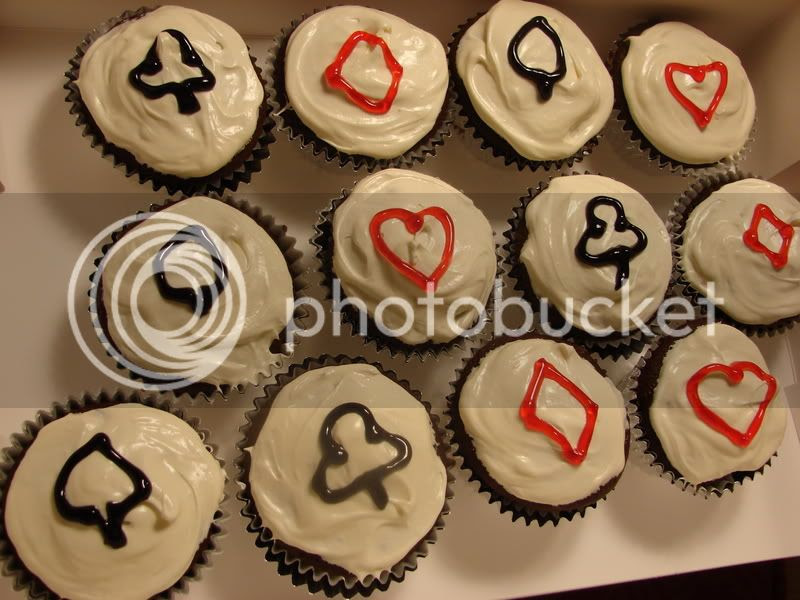 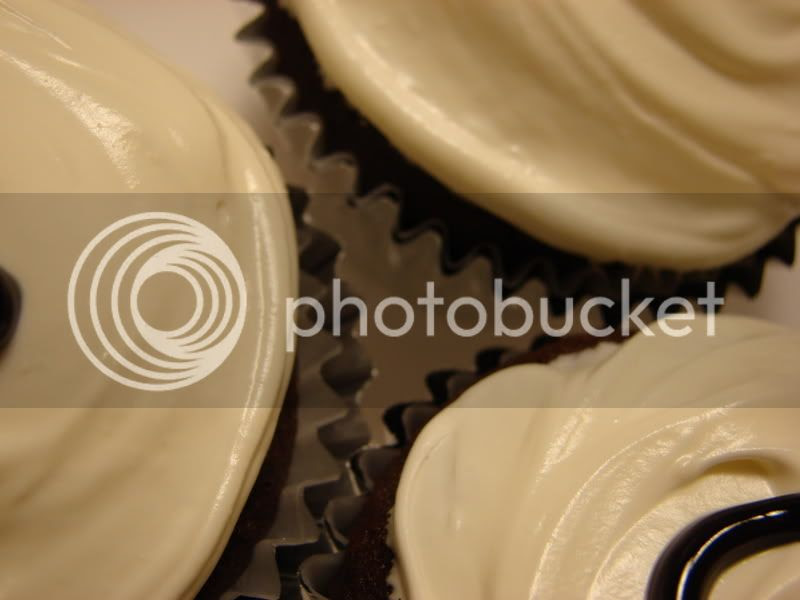 the pizza of my childhood

When I was growing up, THE place to get pizza in my neck of the woods was Faraci's. It was where you got pizza for occasions that required something a little more special than, say, Little Caesars (Pizza! Pizza!...yuck, I know but when I was a kid that stuff was AWESOME!) Faraci is still going, and even has a second location (the link above only has the new address, but the original one in Ferguson is still there). Last night my mom, brother and sis-in-law came over. They brought Faraci's with them! The Faraci Special, which has Italian sausage, pepperoni, bacon, mushrooms, um...a whole mess of deliciousness. They also had a sauceless pizza (my SIL isn't supposed to eat tomato sauce) with hamburger, mushrooms and onions.

Wow, was the pizza good! As good as I remember. Super-thin, handmade crust that's not greasy at all...in fact it still has a dusting of flour on it. The provel cheese, a St. Louis favorite, is runny and sticky and yummy. And the toppings were plentiful. They use canned mushrooms, which I kinda like. I was too anxious to dig in to get any pretty photos of the whole pizzas, but I snapped some after the carnage...there wasn't much left. 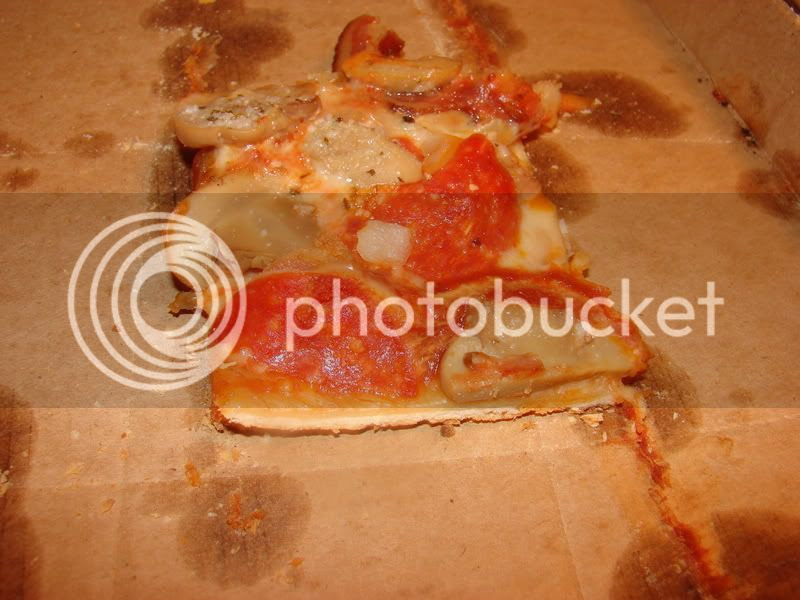 a lone piece remained. This was the Faraci Special. 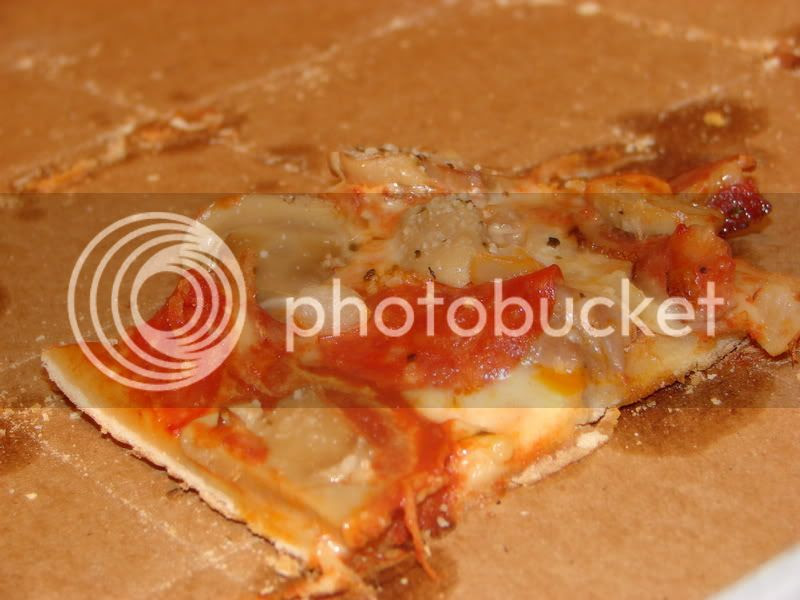 Look at the toppings! 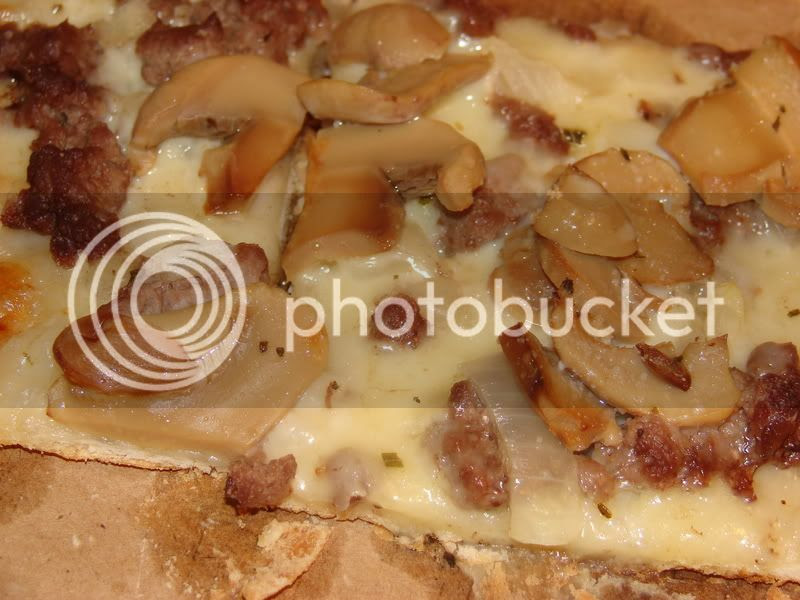 The sauceless. It was tasty, but I would have preferred Italian sausage. Hamburger doesn't have much flavor. 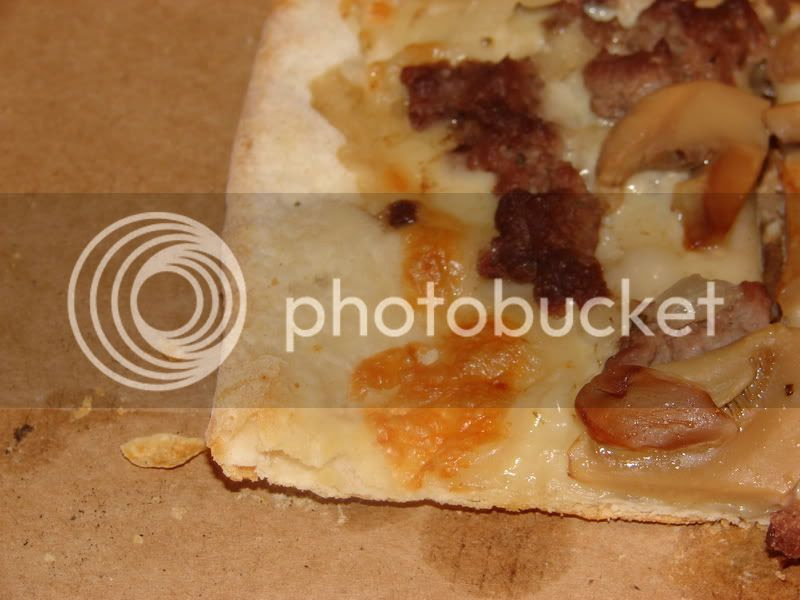 A good shot of the crust. The crust is so good. Light and crunchy.
Posted by ironstef 1 comment:

I stubled upon The Patent Room website the other day, and am enjoying all the drawings of peoples inventions/buildings/etc. In the novelty architecture section there are some real gems. Buildings shaped like food! You don't see much of this these days, but I think buildings shaped like food are wonderful! I'd love to buy a tamale from a guy staning in a giant tamale! Here's some of my favorites:

There are some exisiting food shaped buildings in these United States. The Roadside America website is a good place to check such landmarks out. Check out the veritable salad of buildings here, or if you're thirsty check out all the beverage structures. I hope to visit some of these places. Someday.
Posted by ironstef No comments:

Goodness knows I watch my fair share of the Food Network. I love my Alton Brown and my Nigella and, of course, Iron Chef. But there's way more channels out there. And food shows aren't limited to the Food Network. In fact there are some really good shows on other networks.

The Travel Channel is a great place to find neat shows to broaden your food knowledge. One of my favorites is Taste of America with Mark DeCarlo. Mark travels all over the United States sampling and exploring local customs, foods and people. He's a stand-up comedian, and I really enjoy his sometimes-naughty sense of humor. And if he looks familiar but you can't quite place it, maybe you remember him from that early 90's dating show "Studs."

It's really a feel-good show. A look at the heart of America...unpretentious, happy people keeping traditions alive and making new memories through food. I could watch this show all day long. It's fun! The site has recipes. Here's some that I might try:
lavender marinated grilled shrimp.
Thomas Jefferson biscuits.
Grandma Thomas' Beans. Serves 200!!
Chicken Booyah. BOOYAH!!! (I just like the name)
Hot Brown Sandwiches. (Again, love the name)

Oh, that reminds me, Mark pronounces Sandwiches "Sangwiches." I hear it's a New York Italian thing? And here is a mini interview and a favorite recipe of Mark's. Meanwhile, a whole website about famous people's favorite foods? That'll entertain me for a while.
Posted by ironstef No comments: