today I took a long walk with one destination in mind. St. Louis Bubble Tea. See, I was really jonesin' for their coconut green bean slush with boba. For those of you not in-the-know, bubble tea comes in a plethora of flavors and temperatures. The thing that makes it bubble tea are the boba, which are tapioca like balls, which are bigger than a pea and smaller than a marble. They have the texture of a gummy bear almost. You have to use a special straw to drink it, and yes, you chew your drink.

Anyway, this place has food, too, and I've always been curious to try a menu item called "Soy Sauce Chicken." So today, I did. And boy was it good. It consisted of a chicken leg quarter, very tender and dark with soy sauce. Some white rice, which had that distinctive slight smoky flavor that I never get when I make rice at home, a big hunk of bok choy and a brownish peeled hard boiled egg. I think the egg might have been a tea egg? or something similar. Whatever it was, it was awesome. Kind of sweet and salty. mmmmm. Anyway, I had my camera with me, and the lighting was good at my sunny corner table, and the food looked do pretty and delicious, I snapped some photos: 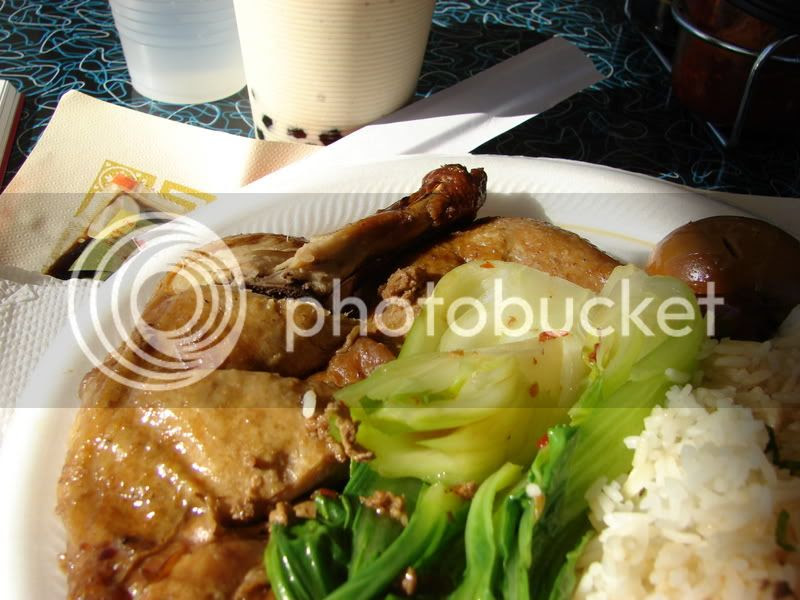 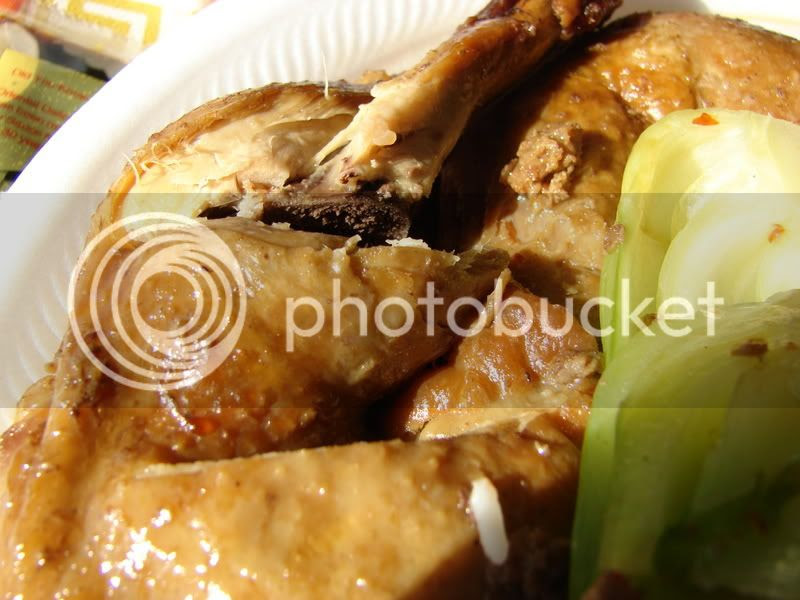 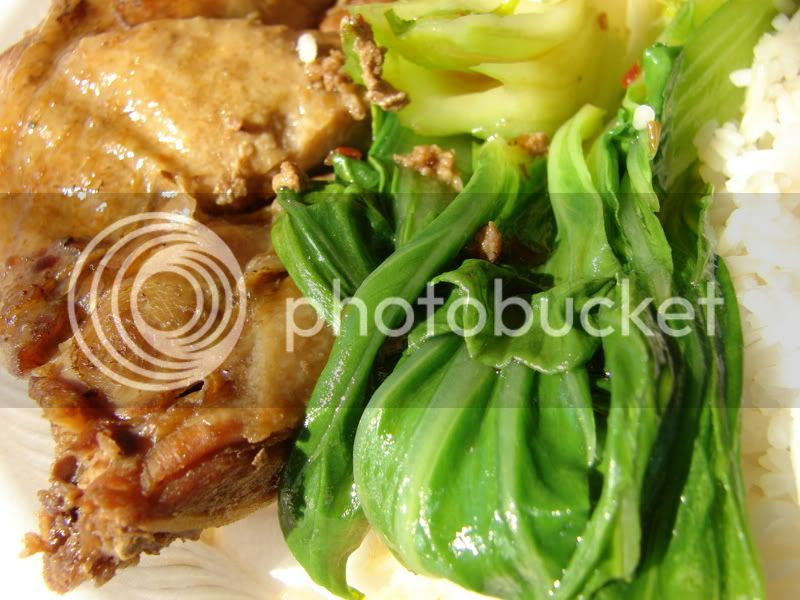 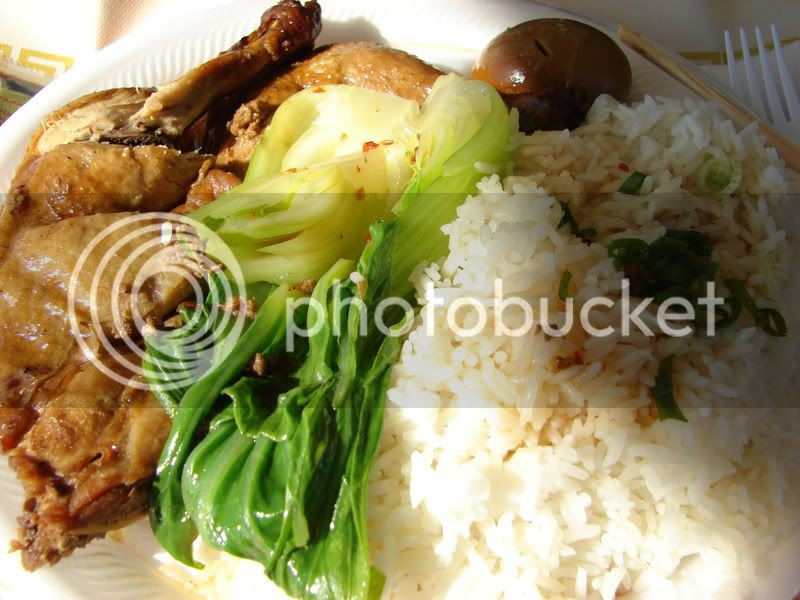 the other cook in the house

I don't know if I've mentioned it much, but my sweetheart is a much better cook than me. He loves to cook, and he does it well. Really well. Last night, after a long day on my feet at work and a fun little work happy hour, I came home to him greeting me with this: 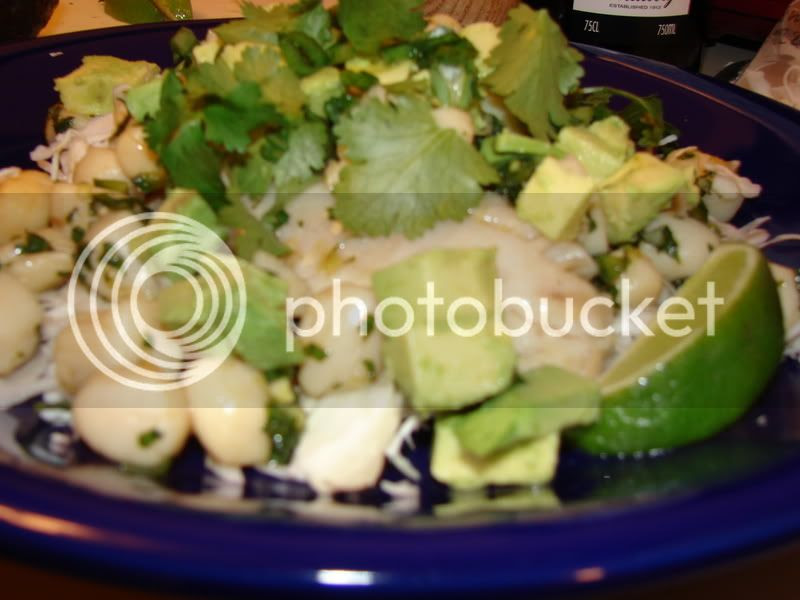 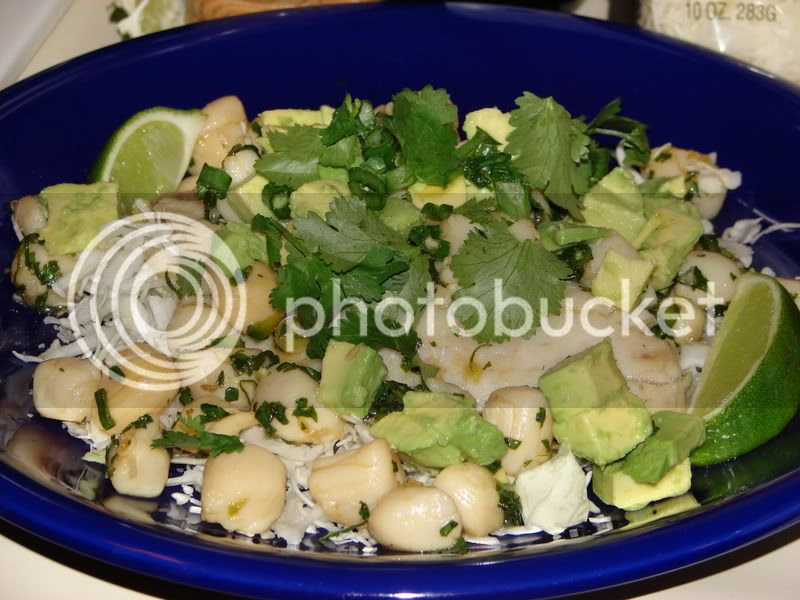 Isn't it pretty? So green. And it was mighty tasty, too. I don't have an exact recipe or anything, but it was a concoction of scallops, tilapia, lime, jalapenos, maybe some sesame oil? On a bed of fresh cabbage, with cubes of avocado and fresh cilantro and more fresh lime. It was pretty spicy, and had a great tang which complimented the fish nicely. Even though it was late, and I had had some sweet potato fries at the bar, I ate the whole big plate of it.
Posted by ironstef No comments:

I've come across information on a couple food books that *gasp* my library does not have. So I've made official suggestions on the library web site that they purchase them. Hopefully they do so soon. Meanwhile, here's what I am talking about:

Food & Booze is a collection of essays about...well food and booze. I love this review of it:

“I opened this neat little volume intending to read about solid, square meals, but then I found myself getting blitzed on absinthe cocktails in Portugal with Elissa Schappell, downing shots of mezcal in a Oaxacan cantina with Mark Statman, and cruising around in Sara Roahen’s family car sipping huge travel mugs of brandy and 7-Up (what are these people thinking?). So I can only tell you that the booze half of the book is a blast. And now I’d like to lie down for a while, if you don’t mind.”
—Pete Wells, Food & Wine columnist and winner of five James Beard Awards for writing on food and drink

Since my library doesn't have this particular book, I looked into info about some of the contributors.
-Steve Almond has a story snippet here that I quite enjoyed. He's the author of
Candyfreak, which I need to get my sticky little hands on. Mmmmmm...candy.

-Lan Samantha Chang has a book called Hunger, which looks interesting.
My library has that book, and I have already requested it.

-Michelle Wildgen has some writing excerpts on her website. They made my mouth
water. She contributed to another food essay compilation, Death by Pad Thai.
Totally been requested from the 'brary.

The other book the struck my fancy is Sound Bites by Alex Kapranas. Alex is the lead singer of Franz Ferdinand, an awesome band. The book is about food on tour. It's getting good reviews, and I can't wait to read it. However, until it becomes available at the library, we can make due by reading his columns in The Guardian.

So, there we are a fresh new big pile of food books to add to my list. Did I mention I already had 3 other food books on hold? That's alot of salivating. Thanks to good pal Kelly for telling me about these 2 new books.
Posted by ironstef No comments:

Last week I came across this article in the New York Times, talking about the complexities of picking music to play in restaurants. It's very interesting if you think about it. The wrong music can ruin a meal. I can't think of an example except the couple times I've been to places where the music was really loud. That was probably my fault, though, because they were bar/restaurant combo kind of places, and when you go for a late dinner at a place like that, you have to expect the music is gonna be more at a bar atmosphere volume.

Since reading that NYTimes article, however, I'm thinking about what kind of music I'd actually pair with meals. Pretty much what this Stylus Magazine article does. I like the thought that music can enhance your dining experience and vice versa. Ear and mouth teamwork! As the author of the Stylus article says:
" Paired together properly, however, they can act as powerful reinforcements and co-dependents. Food can taste better, music can be improved, moods can be set, characteristics can be heightened, and moments can become indelible."

Last month there was a piece, again in the NYTimes, which had the top 5 songs on the playlists of 3 top restaurants. Here's the link, and here's the content (so I can refer back to it once it becomes a paid article):
"The Remix; Ear Candy
Everyone has heard a great (if obscure) song while dining and asked, ''What is that?'' At last, these restaurants' current Top 5 playlists provide some answers. PAUL L. UNDERWOOD

Momofuku, New York
Waylon Jennings, ''Are You Sure Hank Done It This Way?''
Early Man, ''Thrill of the Kill''
The Hold Steady, ''Multitude of Casualties''
Pavement, ''Frontwards''
Luna, ''Moon Palace''

Speaking of Music-Food pairings, here's a fun list of Best Music to listen to While Eating Spam on Amazon's Listmania. Ha!

The relationship between food and music is definitely one I'll be exploring more. Both are fantastic ways to learn about other cultures. Both stir up strong emotions in people. Both can make your day or put you in a bad mood. In the introduction to the Philharmonic cookbook by June Lebell, Rose Levy Barenbaum explores her connection to each and how they intertwine:
" The connection between food and music is found even in the words used to describe them. In the food industry, the most common word used to analyze flavor is note. Texture is another word food and music have in common. One of my favorite musical memories is of the time I met Isaac Stern at a party celebrating the birth of Jenifer Lang's book Tastings. I had provided the Chocolate Oblivion Cake that was featured in the book. When George Lang introduced me to Isaac Stern, he rose up, took my hand, and bowed deeply from the waist saying: "Your cake was like velvet." My response: "That is the very word I used to describe your playing the first time I heard you play the Tchaikovsky violin concerto when I was sixteen!""

And finally, there is a discussion over on Chowhound about food and music. Does a person's taste in each correlate with each other? Is someone who is adventurous in what they cook/eat also adventurous about his or her music choices? The consensus seems to be that it really depends on the person.
Posted by ironstef No comments:

Email ThisBlogThis!Share to TwitterShare to FacebookShare to Pinterest
Labels: food for thought, music

Inspired by this post on Slashfood, I present: Ironstef’s 2007 New Years ResaFOODtions!

1. Successfully make some basic food classics that kind of intimidate me;

2. Pay more attention to wine. I love me some red wine, and drink it all the time. I’ve fallen in to a rut of sticking to my favorite varietals, not paying much attention to the subtleties of taste and aroma, and not keeping track of wines I’ve tried.

3. Become more tea savvy. I drink tea almost every afternoon. Just a pouch of green tea, usually flavored with chai spices. But I haven’t ventured much outside the supermarket teas.

5.Take advantage of the diversity of St. Louis and try different cuisines at local restaurants. Here’s some that I want to go to. I resolve to visit at least 3 of these this year.

6. Work on my food photography.

7. Go through all these awesome how-tos on Cooks Illustrated’s web site.

8. Get some nice stuff for our kitchen:

That’s it! Looks like I have an exciting year ahead of me. Feel free to share you ResoFOODtions in the comments! I’d love to hear them. Happy Food Year!!!