2014: The year I spent Memorial Day in Taiwan, and Thanksgiving in Dubai. Yep, this Midwestern girl learned what it was like to feast in the Middle East! I still feel slightly ridiculous telling people I went to Dubai... isn't that kind of vacation only for the 1%? Doesn't everyone over there drive Lambos and Bentleys? Don't the ATMs dispense gold bars and the restaurants all have a $250 minimum? How? Why? Would little old Iron Stef go? Well it turns out, Dubai is not just for billionaires! It helped that I have friends over there who I could stay with to save money, but an affordable vacation can be had. The beaches are free, there are tons of good eating options that won't break the bank, and it's just a really neat place to experience. (but there really are gold ATMs and more Lambos and Bentleys than average...) 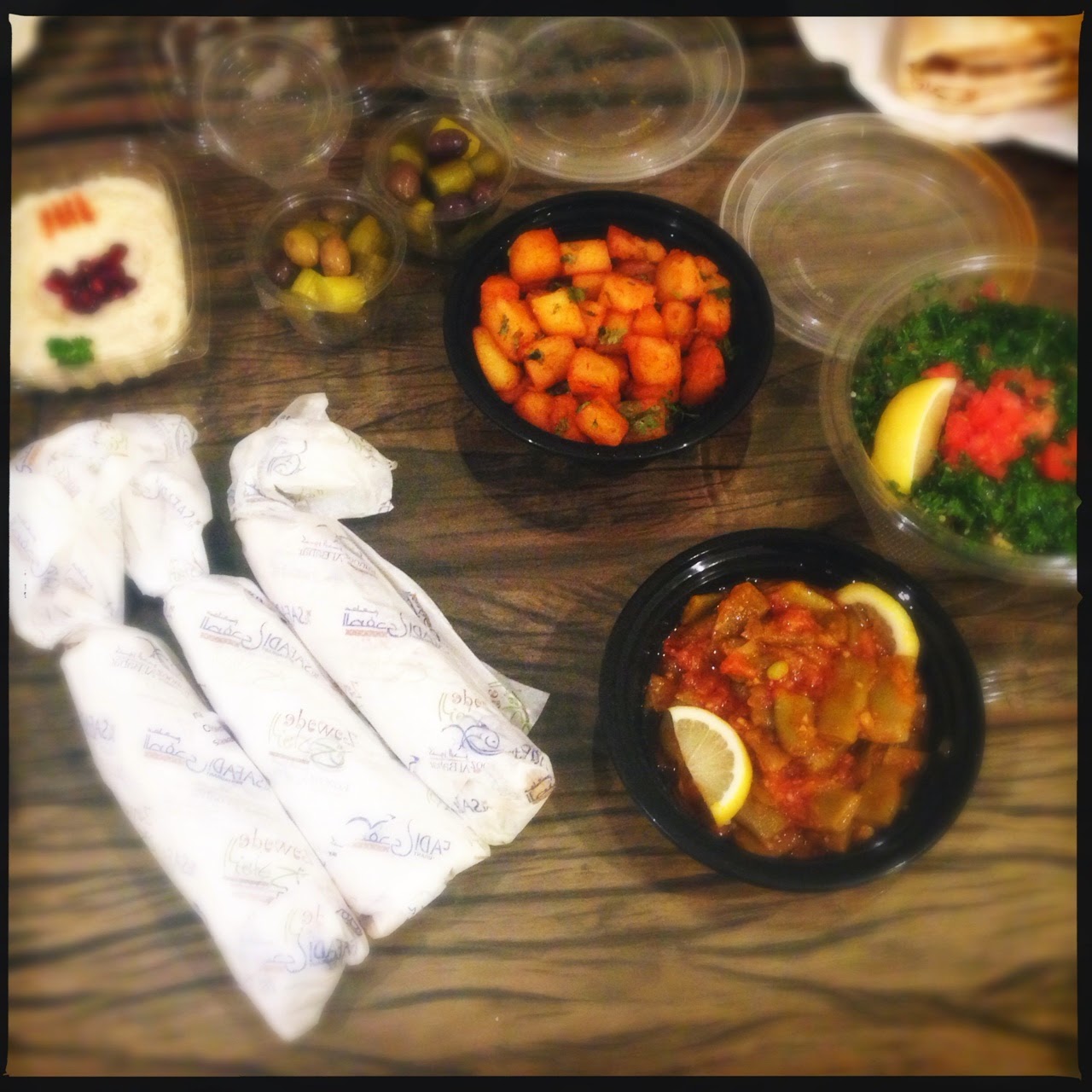 This was my first meal in Dubai... my flight got in about 10 pm, so by the time we got back to my friends' apartment, it was pretty late. They ordered shawarma and a bunch of other Middle-Eastern delights to be delivered from a nearby Lebanese place. Late night shawarma delivery? I was loving this place already!

The first place that I insist you must go if you are so fortunate to visit Dubai is The Sheikh Mohammed Centre for Cultural Understanding. They host traditional meals during which you learn about Emirate food, culture and people.
I gotta be honest, I didn't plan well for this trip. When my friend asked me where I wanted to go during my visit, I didn't have many ideas... I just thought we'd go to the beach a bunch. I did know I wanted to go to a Shake Shack. I just think it's kind of crazy that there's several of them over there, yet I had never been to one here in the states. We went to the one on Jumeira Beach. I can see why Shake Shacks are so popular all over the world. The burger was impressive and the custard in my root beer float was the creamiest substance I have ever had. I wouldn't normally condone going to an American chain when overseas, but this was a great choice for beach day. Got me nice and drowsy before relaxing in the sun.
When I went inside to take a photo of our Masgouf cooking by the fire, the waiter saw me and waved me around the counter and into the fire room so I didn't have to try to shoot through the fogged-up glass window. It was embarrassing, but so nice of him! I'm sure they are used to nerdy food fans since Bourdain came through.

The fish came out on a platter, and the waiter skillfully cut (well, more like, scooped... ) the tender charred flesh from the skin and deboned it and served us all. The pieces from the middle top were kissed the most by the flames, and tasted like fish bacon. Yep, fish bacon.

Dubai is not a dry country, per-se, but it is certainly less-boozy than I'm used to. My friend, knowing how hard it is for me to go 8 days without beer, suggested The Belgian Beer cafe. It's in a beautiful mall/hotel complex, with pretty views. I chose a wedge salad and this Kasteel tripel. The salad was a deconstructed wedge, but it was very good. This place is an international chain, but if you're looking for good beer in Dubai, this is one of very few options.

One night, my hosts had an appointment, so I was own my own for the evening. The thing about Dubai is that it's hopping at night, and very safe. I wandered around the area near Dubai Mall and Souk Al Bahar. There are tons of restaurants to choose from both at the mall and at the Souk. Most of the places at the Souks overlook Dubai fountain, so I chose one there. Dubai fountain is pretty spectacular... it's at the foot of the Burj Khalifa, the tallest building in the world. Every 30 minutes a "choreographed" fountain show would play... a ballet of water shooting high in the air. I got a cozy seat at the cute Lebanese restaurant Zahr El-Aymoun. The seats were all covered with shabby-chic fabrics and the decor involved lots of jars and such. I had what were sort of like Lebanese nachos... fettet zahr el-laymoun. It had all the flavors... creamy yogurt, sweet pomegranate seeds, roasty eggplant, savory onion and cumin. I could eat bowls of this! I also got some Labne... it was kind of dry, but good flavor.
And then I ate camel. Yep. At The Local House, the specialty is camel burgers and other camel-ized dishes. It's a lovely semi-outside place that offers free tea and Arabic coffee to weary people who have been walking around the Cultural centre all day.
I ordered a date milkshake (camel milk, obvs) and a house burger, which was camel meat topped with egg, cheese and tomato salad. The shake was soooo good. Dates taste a lot like caramel, and caramel is one of my favorite substances on earth. Camel milk is creamier and richer than cow milk, so this shake was basically like an über-creamy caramel shake. Whoa. The burger, while overcooked, was good, too. Camel tastes similar to beef, but a bit richer, and with an aftertaste reminiscent of lamb.
Speaking of camels, there was a small cafe (there are several in Dubai) called the Majilis that had camel milk lattes and ice cream. This chocolate ice cream was the best chocolate Ice cream I've had, I think. Rich and very chocolaty. We had it twice while I was there.

In the end I loved Dubai more than I expected to. I encourage you to consider it as a travel destination, just be sure not to get caught up in all the shopping and materialism. I mean the shopping is great, but make sure you seek out the local culture and traditions. There is so much to learn, and eat, from this oasis of international diversity.

When I went to find the link to my post about the first time I met Micheal Ruhlman, I was amazed to find the entry was 7 years old. So much can change in 7 years...2007 feels like ancient history... I was just starting to connect with other food-obsessed people in the area. The St. Louis Food scene was on the edge of becoming the force it is today.


This most recent evening's dinner was to promote Ruhlman's lates cookbook, How to Roast. I was there for Egg, a book I can't believe I only just got, considering it's the year of the Egg here on Iron Stef. 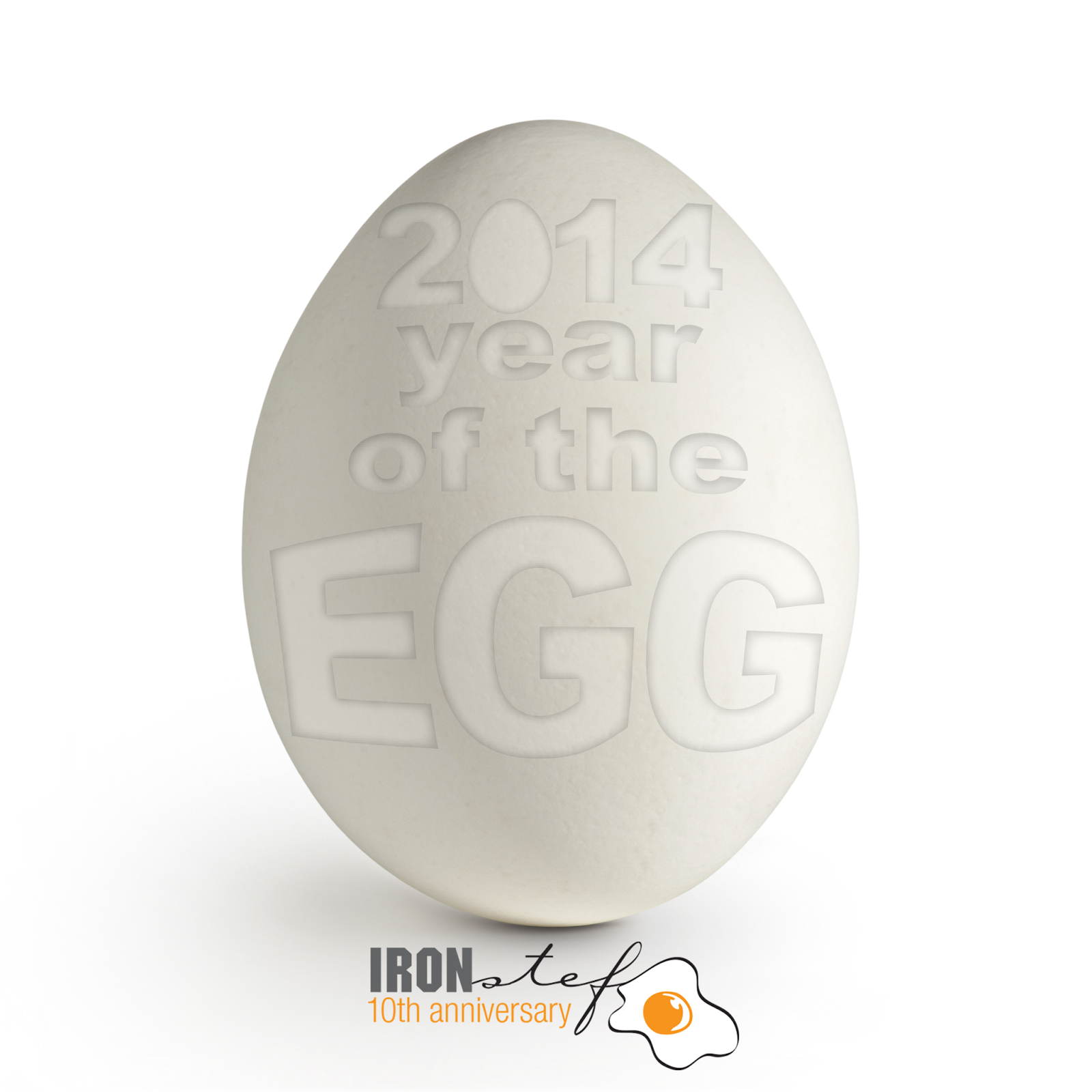 I am glad I waited because I now have a signed copy! And wonderful memories of dining with and talking to Micheal Ruhlman. How many people can say they've had dinner (and drinks... too many drinks) with one of their favorite authors? I was on food nerd cloud nine for days (BTW, you can still have a wicked hangover when you're on Cloud 9). 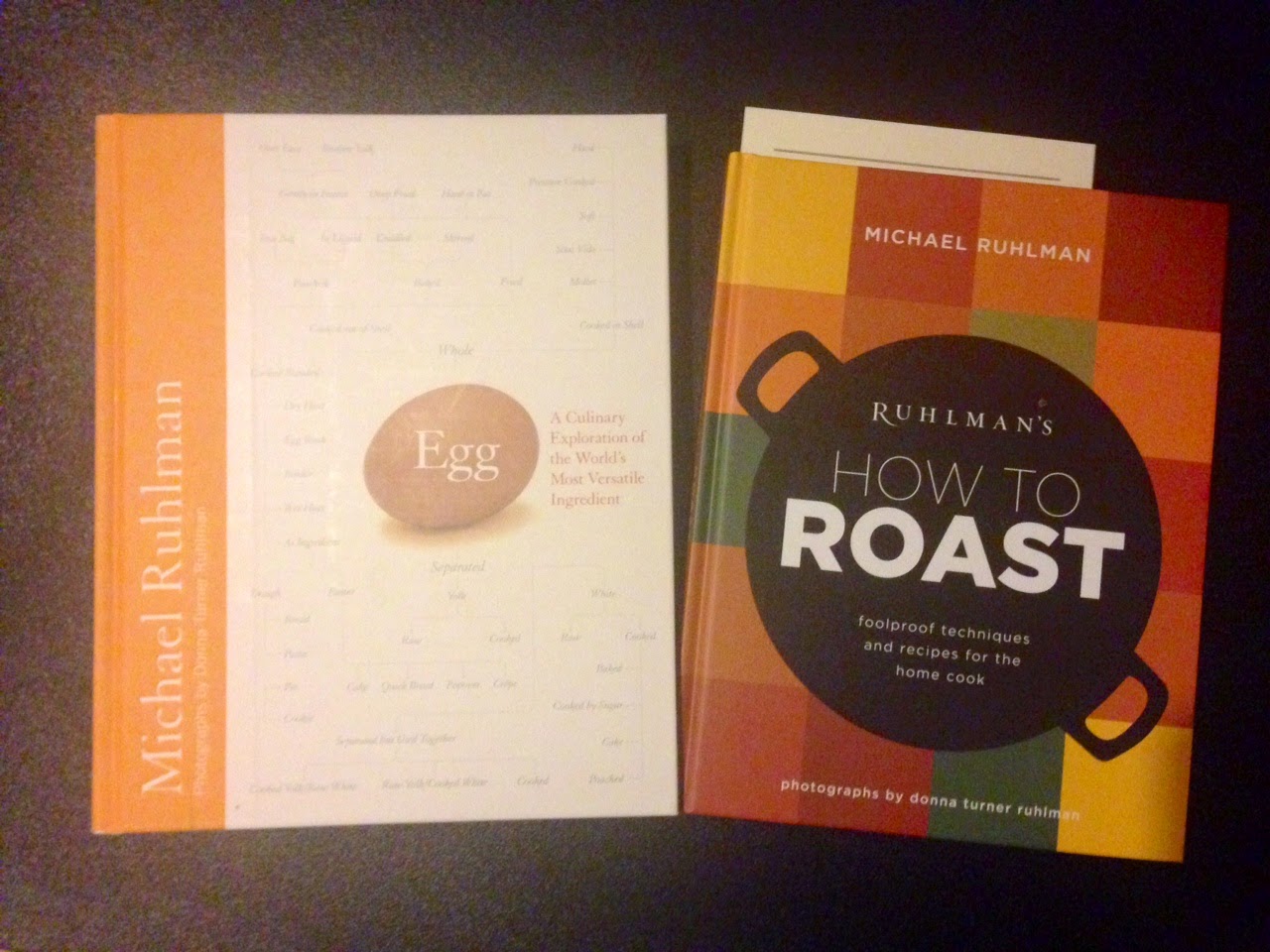 The dinner, sponsored by Sauce Magazine, was planned and prepared by Chef Rex Hale at The Restaurant at The Cheshire and his team. The menu based on recipes and teqniques from How To Roast... roasted seafood, brussels sprouts, root vegetables, beef... even dessert was roasted - roasted pineapple. It was an abundant and wonderful meal, with wine pairings to boot.

Before each course, the Chef would tell us about the dishes and wines, and Ruhlman would stand up and preach the importance cooking and of real food. The man is passionate, you guys. He is keyed up about food, and insistent that people learn more about it and, most importantly, cook at home, from scratch (queue "Turn Down For What?"). This night was not ALL about gluttony, I swear.

Marketing has taught us that cooking is hard and inconvenient, and that artificial foods are healthier for us... these beliefs are simply not true! Wholesome meals can be cooked very quickly and with minimum ingredients, if you just plan a bit and learn some basic techniques. To quote Ruhlman:"Before you start to cook in the kitchen, think!" Cooking is not hard and not scary if you just go at it with some common sense and practice. As far as the "health" foods in boxes on the grocery store shelf with their promise of Low-Fat," they are not good for us, and often contain more sugar and more chemicals to make up for the flavor lost when fat is absent. Again Ruhlman provides a battle-cry: "Fat is not bad. Stupid is bad." (That one got some cheers from me and my fellow diners.)

So here I am, spreading the gospel of good cooking and good sense. The gospel of Ruhlman. I'd suggest he start a religion, but that would limit the audience... everyone needs to hear these messages. Food should be simple and nourishing, case in point, the following 2 "recipes" I made in one day from both Egg and How To Roast:


In the introduction to Egg, Ruhlman talks about how Alton Brown told him "Yeah, I've always like to say that the egg is the Rosetta stone of the kitchen." Ruhlman elaborates on this spot-on metaphor:

"Like the Rosetta stone, the egg, far more ancient, unlocks the secret language of the kitchen. Learn the language of the egg–understand completely this amazing and beautiful oblong orb–and you can enter new realms of cooking, rocketing you to stellar heights of culinary achievement.

The greatest of all our foods, the egg combines beauty, elegance, and simplicity, a miracle of natural design and, as food, bounty. Containing all of the nutrients required to create life, eggs give our bodies a powerful combination of proteins, amino acids, fatty acids, antioxidents, minerals, and vitamins, a package unmatched by any other single food." 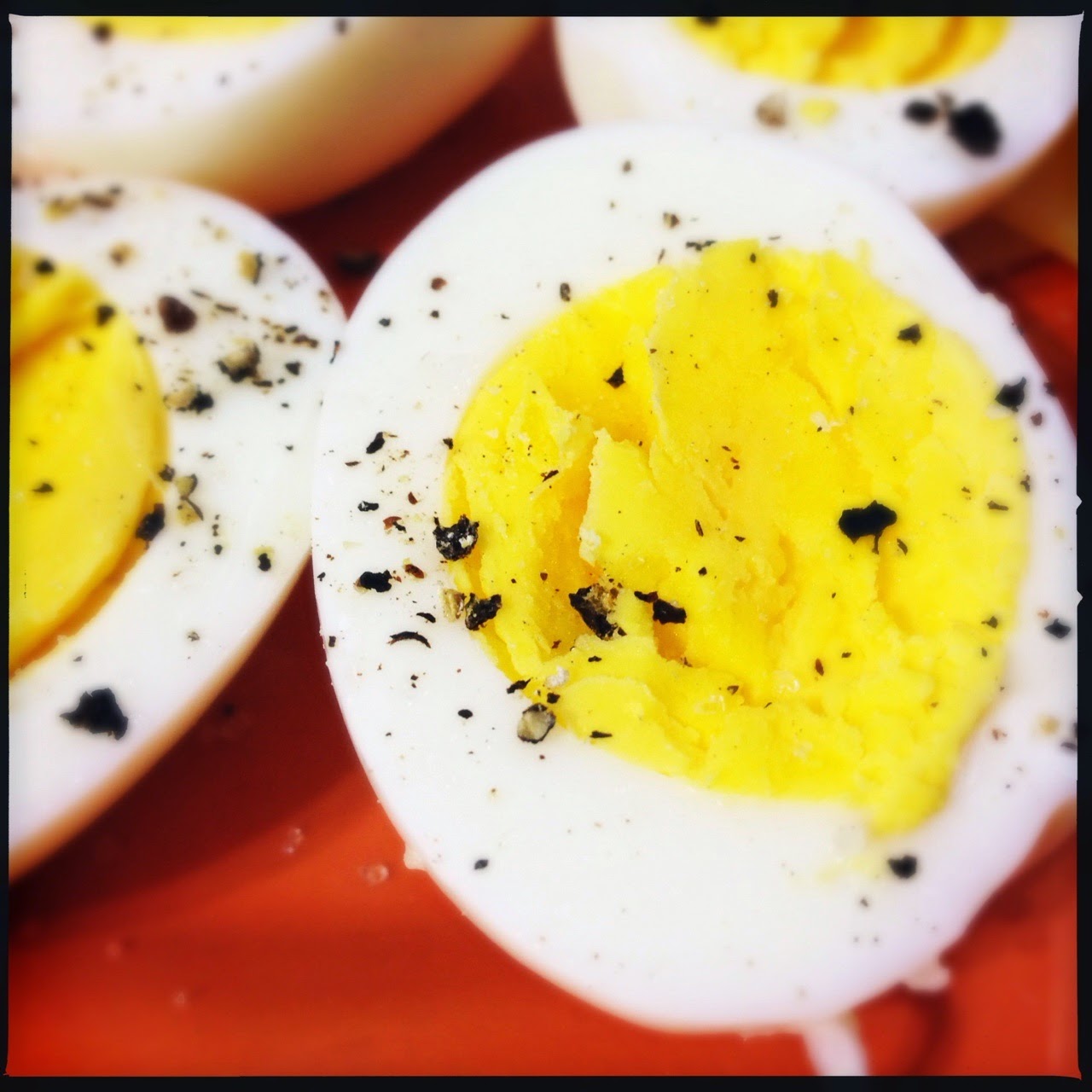 One of the recipes in the book is for warm, hard-cooked, creamy-yolk eggs to be served with ham and cheese and bread. 2 eggs, simply and quickly cooked in water in the shells, with some bites of cheese and bread make a satisfying and enjoyable breakfast or lunch that is nourishing and requires minimal effort. Anyone can do this. It was lunchtime when I was reading through the book, and decided to make this for my lunch... 10 minutes later I had lunch and only one pot to (barely) wash. 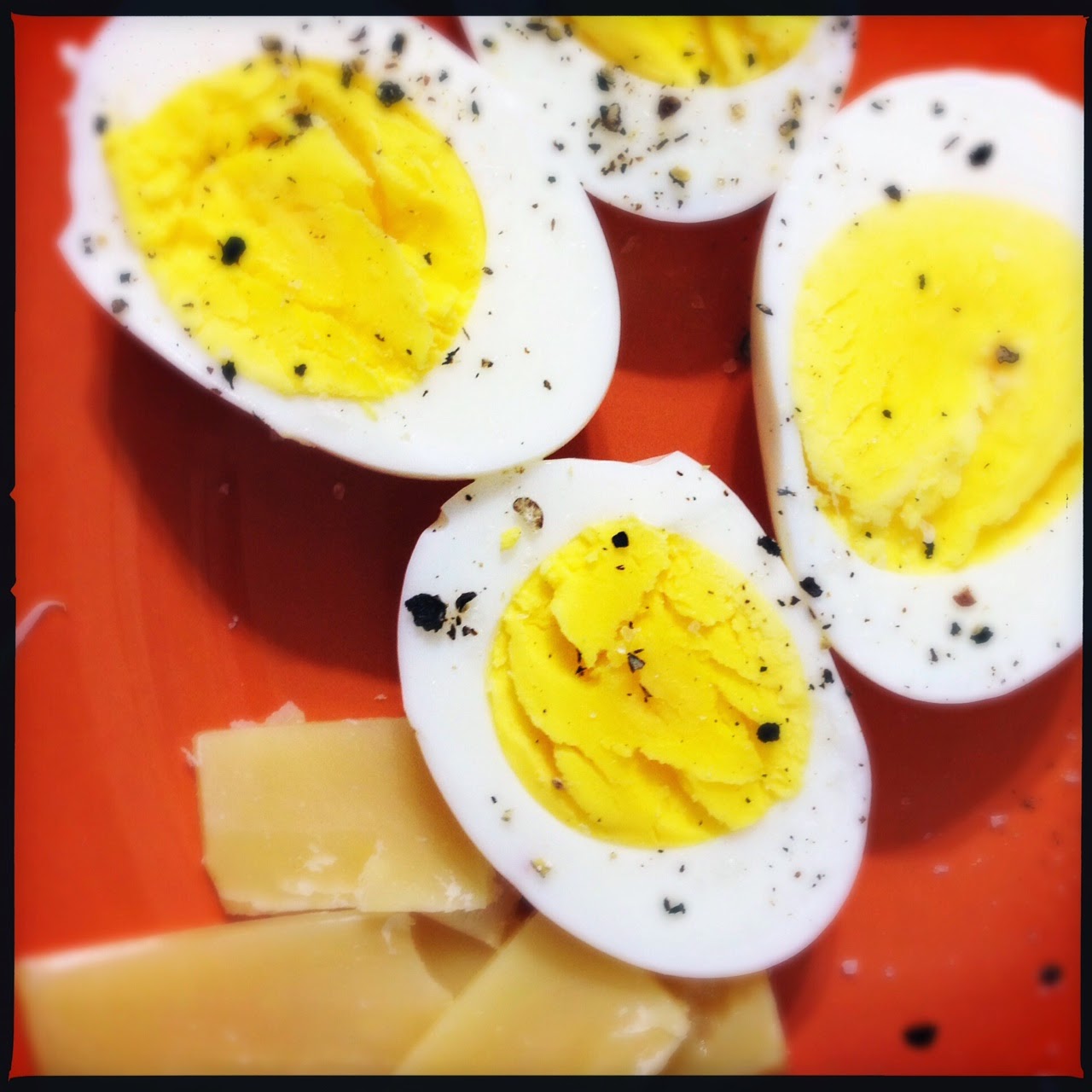 For dinner that same day I made roasted cauliflower from How to Roast. Also a low-effort, high-result, simple and healthful dinner. Both books (as with all of Ruhlman's cookbooks) are great for giving you the basic knowledge and skills to help you feel increasingly comfortable in the kitchen. Good for both beginners and people who already love to cook. 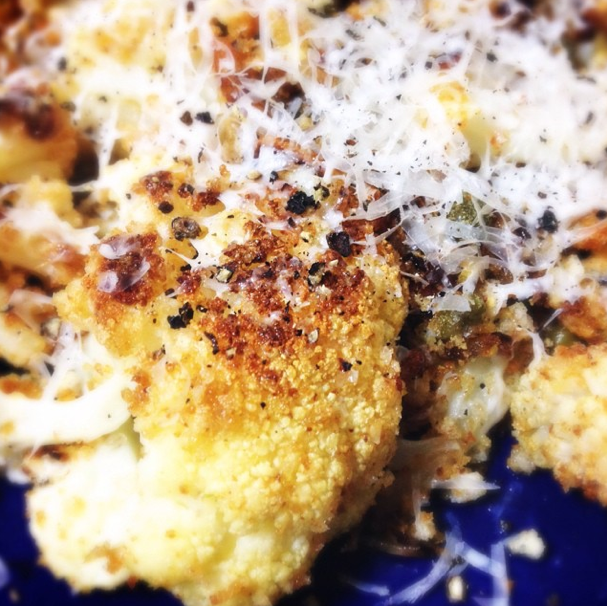 Conclusions/Lessons:
-Get in the Kitchen and cook... but think first. It's that simple.
-Eat REAL FOOD. Everything in moderation (except, apparently, alcohol when you're drinking with chefs, authors and magazine editors)
-Be passionate about life.
-Go to author dinners, even if you can't find friends to go with or if it's a bit over your normal dinner budget. It will likely be worth it.