Yesterday I made the goodies for a bridal shower at work. I made little cupcake brides and strawberry grooms. 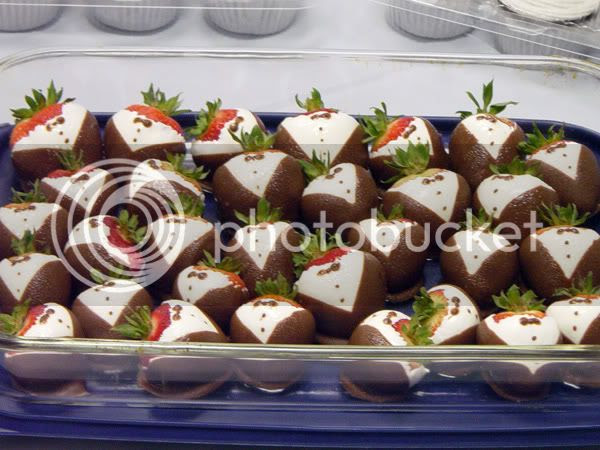 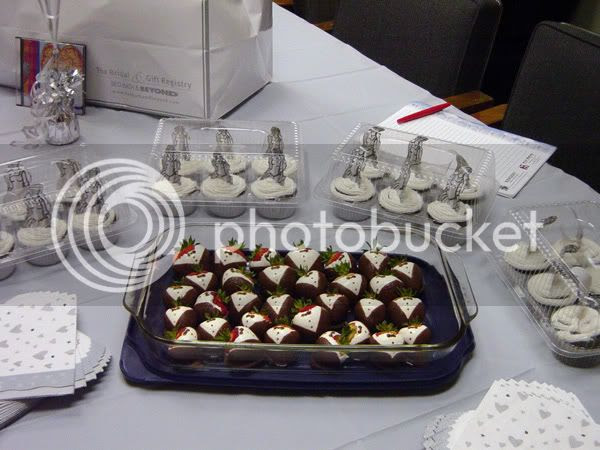 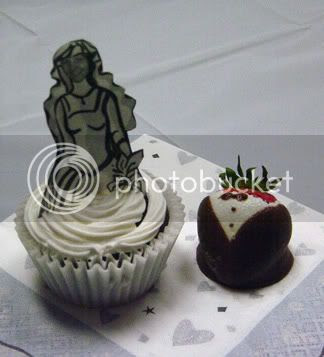 Well, there I went, anyway. Last weekend my sweetie and I headed out there to visit his sister and her hubby, and to be total gluttons for the weekend.

Saturday, we went to Arthur Bryant’s for lunch. A small, unassuming old place, packed with people and smelling like smoke. It's one of the most famous BBQ places in the country. We'd seen it featured on several television shows, and Jack has a friend from KC who always goes there when he visits home. So it was tops on our list of places to go. And it was a good choice. The 4 of us split two beef sandwiches, an order of fries and a pint of beans. It was very yummy. Different than the sauce I'm used to here in St. Louis, more vinagary and thin. Really good. Sopped it up with my thick slice of bread.

Saturday evening, after visiting the Nelson-Atkins art museum and cruising around downtown in the Plaza and Westport areas, we went home with take-out from Oklahoma Joes BBQ. Being big food network nerds, we saw this place on tv, too, and had to have it. It's a BBQ place located in a gas station! We got a pound of beef and a half pund of pulled pork, a couple bottles of sauce and a pint of beans. Their sauce was more like what I'm used to, but I liked it, too. And Pulled pork, oh my, I adore pulled pork. I liked their beans a little more than Arthur Bryant’s. AB’s did have big pieces of burnt ends in them, though. Oklahoma Joe's beans had 3 different kinds of beans, and some small meat pieces and onions and a tomato-ier sauce. I ate lots of them.

That evening, after a rousing game of Trivial Pursuit DVD edition, we went o Sheridans for late night frozen custard. Oh my bob, was it good! I know I come from the land where Ted Drewes reighns supreme, but I really enjoyed my caramel pretzel concrete more than anything I’ve had at Ted’s. Shocking, I know. What’s more shocking? I found out just yesterday that there is a Seridan’s in town!! This could be trouble.

Sunday we had dinner at a Mongolian BBQ place called Ghengis Khan. I really like the concept of Mongolian BBQ. A buffet of raw goods…veggies, meats, sauces, seasoning, that you pick out yourself. Once your bowl is full with everything you want, you take it over to the guys at eh big hot round platform, where the dump it and cook it, stirring it around with two big wooden sticks. The buffet at Ghengis khan had a bunch of seafood, so I skipped the typical chicken and beef and got myself stuffed on scallops, squid, mahi mahi and shrimp. My first bowl was just a simple mixture of edamame and some other greens, seafood, soy sauce, ginger, garlic and sesame oil. While waiting for my first batch to get cooked, I grabbed some pork satays from the little appetizer bar. One of the sauces for dipping was a peanut curry sauce. I was inspired! For my second plate, I added lots of fresh cilantro, some more seafood, a couple kinds of greens, tofu, garlic, ginger, then, here’s the good part, crushed peanuts & lots of curry powder. What a great meal! It’s hard not to eat too much. So I ate too much. Like it was hard to walk afterwards :)

After that, we went to Cold Stone Creamery. We got it to go, because none of us could fit another moresel of anything into our stuffed bellies. I got the German chocolate cake specialty. The girl messed it up a little and added chocolate chips and forgot the nuts. But basically it was a brownie, some caramel and coconut in the chocolate ice cream, It was so so so so delicious!! It was my second time having Cold Stone. I had it a couple weeks ago when a gal from work and I decided to do an “Ice Cream for Lunch Day.” That time, I cot French vanilla with cake and chocolate and graham cracker crust, and it was a little too sweet. But the germanchocolatecake (however the heck they spell it…) was pure heaven.

Oh, I forgot, On Saturday afternoon we stopped by at this place called The Red X on Riverside. It’s this crazy big place with…well, just about everything. They have groceries (we needed Texas toast for our Oklahoma Joe’s), a 99cent section, antiques, Farm gear, etc. But the best part (besides the collection of antique glass eyes and false teeth…eeeek) was the wine section! Believe it or not the selection was really big, and well-priced. And the guy working seemed to really know his stuff. He recommended Syrah to go with our bbq dinner. We ended up with Guenoc Petit Syrah. It was very good wine, and really went well with our pulled pork and beans.

A couple more neat BBQ links... Next time we visit KC, there’s some other places we want to try for BBQ, such as LC’s and Gates. This site has tons of reviews of KC BBQplaces. What about outside KC? This site is all about BBQ styles around the world, with the US broken up. Very interesting.
Posted by ironstef 1 comment: