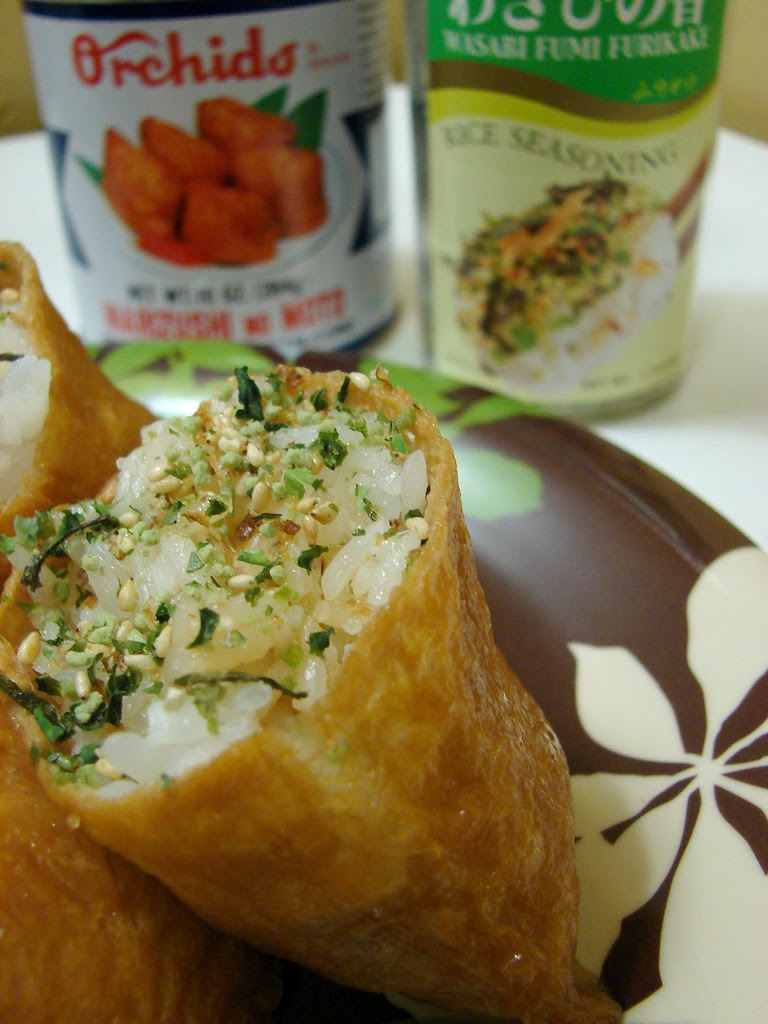 Leave it to twitter to inspire yet another dinner for me. This time a friend made a comment about "tofu-pockets" thinking she was making a joke, and not knowing that there really are such a thing. Tofu pockets, or "inarizushi no moto", are basically tofu that has been deep fried and then canned or frozen in a sweet/salty flavored juice. You have seen Inarizushi on Iron Stef before, back when I was regularly making bentos... a habit I really need to get back into, for the sake of my wallet and my waistline. 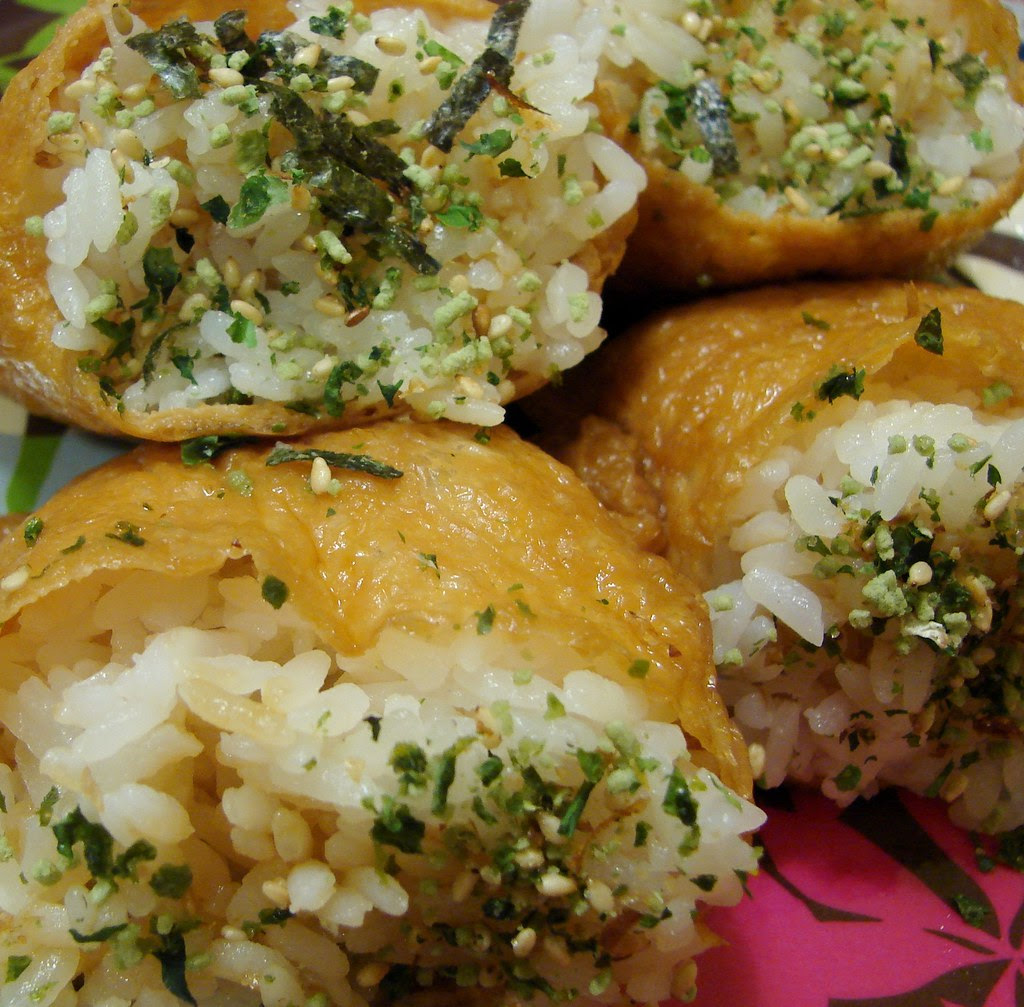 There is not much of a recipe here. I cooked some rice. Let it cool a bit so I could handle it without pain. Stuffed some rice into tofu pockets, poured some of the juice from the can over the rice. Dribbled a bit of soy sauce over the rice. Sprinkled them with wasabi furikake, a Japanese rice seasoning made with dried seaweed, dried shrimp, wasabi powder, sesame seeds and other seasonings and spices. An über simple weeknight dinner... though I think they are usually thought of more as a snack. When you're single, snacks often make the most sensible dinners (take popcorn for instance. one of my favorite dinners!).
Posted by ironstef 1 comment: 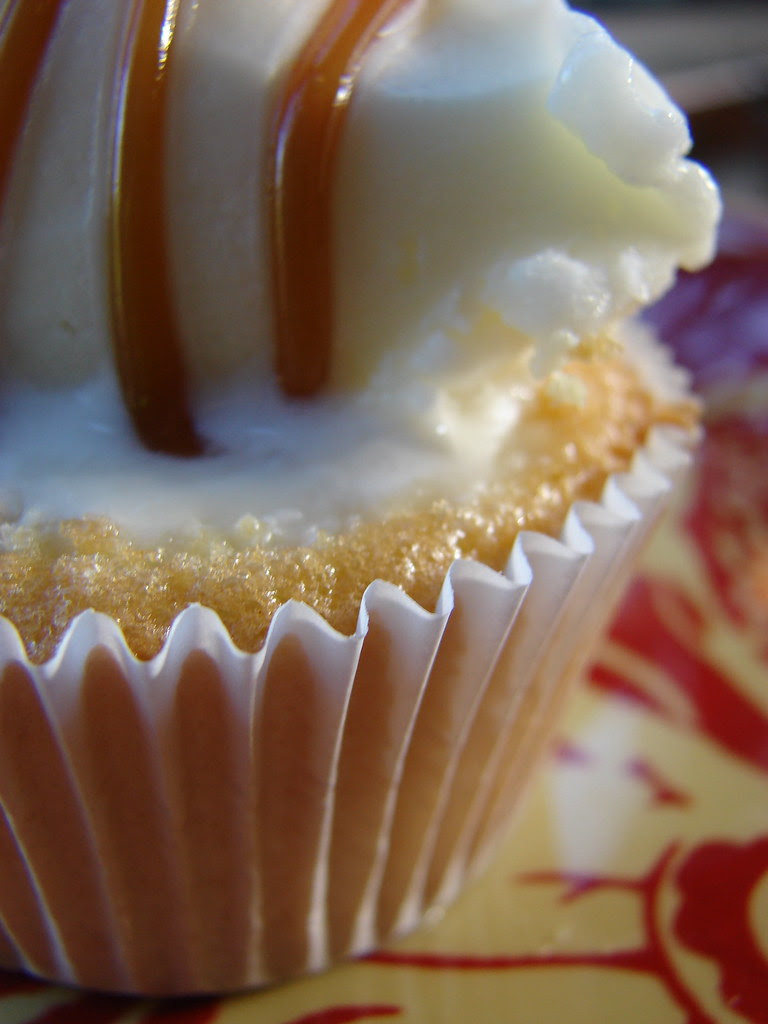 For the ice cream part, I went with pineapple sherbet. Yeah, the very stuff floating in baby shower punches everywhere. And for an additional touch of deliciousness I made some dulce de leche! This was my first time ever making it, though I've wanted to try it for years. I was scared because, you see, you simmer the whole can in water for 3-4 hours, and there are lots of stories out there about exploding cans of hot caramel. No explosions this time, thankfully. I made sure the can was fully covered with water the whole time. It turned out awesome! Thick, sweet, creamy. Unfortunately the can was still molten lava hot when I needed to take the photos, so the caramel topping you see is a melted caramel I dug out of my purse.

So I made my cupcakes, packed everything up and headed over to Mexican night. When it was time for dessert, I dished out the cupcakes, sherbet and dulce de leche for everybody. They got the deconstructed version. We all sat down to dig in, and my friend, who has no pets, said "why does it all of the sudden smell like dog in here?" Ummmm.... turns out it was the tres leche cupcakes. Somehow the combo of the 3 milks had resulted in a slight wet dog smell. Yup. I had made and served wet dog cupcakes. They did not taste like wet dog (not that I have tasted wet dog, but I imagine wet dog does not taste sweet and milky and coconutty).

Overall, the pairing was a success, the sweet fruity sherbet with the milky cupcakes and the creamy caramel.

It's a shame they had to smell like wet dog.
Posted by ironstef 7 comments: 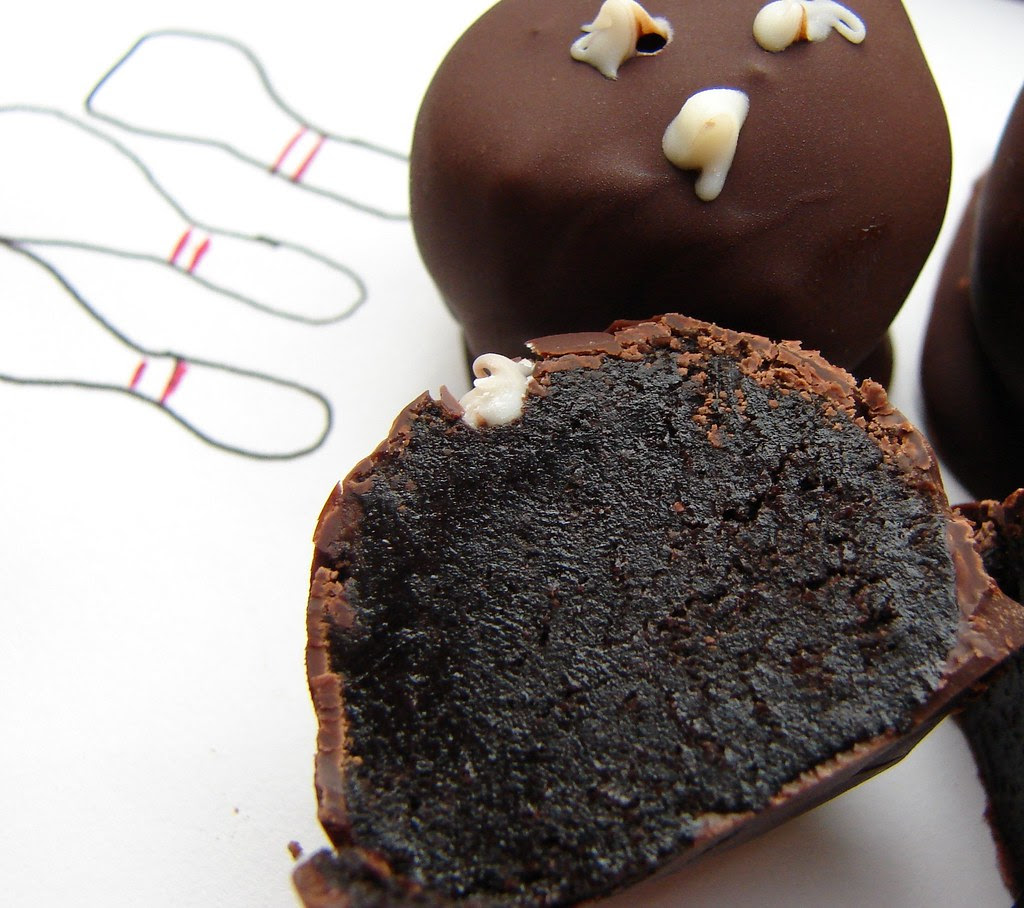 I joined a bowling league!! It started last night. Considering I hadn't bowled in a few weeks, I knew I should bring something to stay in my teams good graces when I failed at getting the pins to fall (and boy howdy did I fail the first 2 games! blech!). Kelly had brought up her oreo truffles recently during Wednesday Night Ritual (wine and food and fun in Alton, IL!). I thought these would be perfect for a bowling league treat, being as they are shaped just like little bowling balls! So instead of drizzling the white chocolate over them, I made 3 little dots on each "ball." Kind of adorable, I think...though the guys on my team didn't use the words "adorable" or "cute." They just said "YUM!"
Posted by ironstef 4 comments:

tamales, a dinner, a project 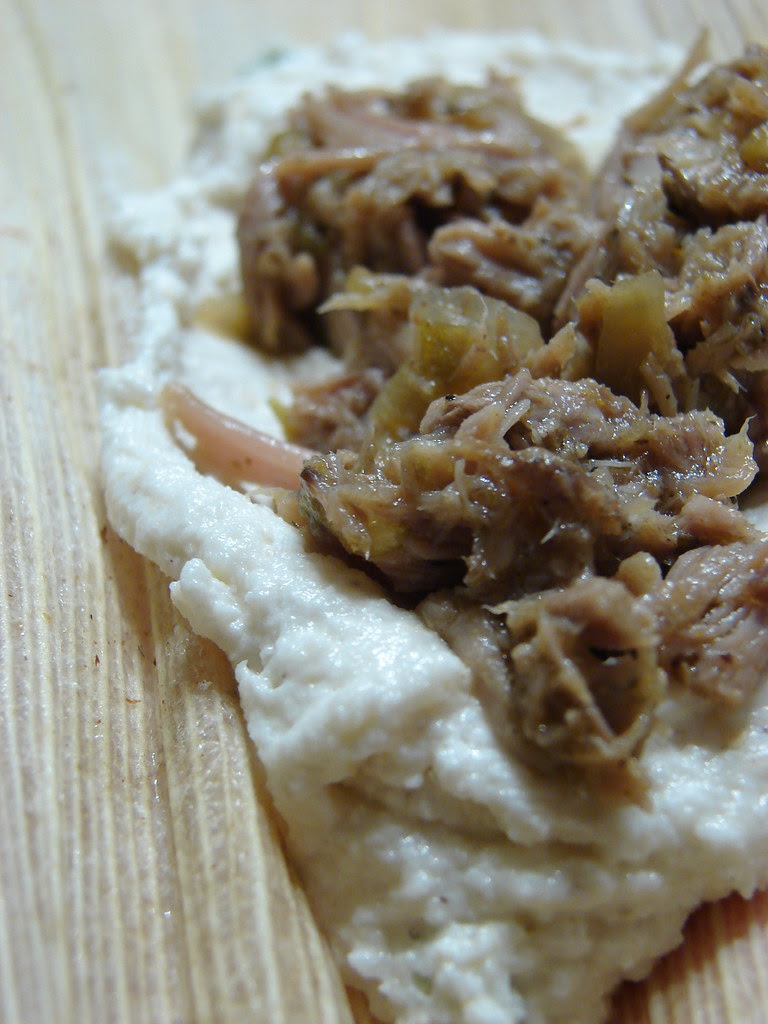 I am still lacking kitchen time in my life. Don't get me wrong, I am loving life...enjoying old friends and family, making new friends, lots of laughter, conversation, and fun. But when I don't get to cook, I feel a certain emptiness. So when I had a mostly-free Sunday, I decided I had to not just cook, but do a cooking project. Something that involved multiple steps and lots of time. Not necissarily something difficult, though, just something, you know, meditative and satisfying. Being that tomorrow is Cinco de Mayo, I had mexican on the breain. Tamales are a GREAT cooking project. You may recall when I made these. I sure do. yum!

This time I wanted pork tamales. I threw a pork roast in the crockpot with cumin, coriander, thyme, mexican oregano, cayenne pepper, smoked paprika, a few fresh smashed garlic cloves, a chopped shallot, a sliced jalepeno, seeds and all, and a jar of salsa verde. That cooked on low all day, about 8 hours. For the tamale dough, I simply followed the directions on the bag of masa harina, tripling the recipe, and adding a chopped jalepeno for good measure. Once the dough was made and the cooked pork was chopped up and added back to it's cooking juices, I set up an assembly station at the kitchen table and set to work putting together tamales in some dried corn husks which I soaked for a few minutes in warm water. After I assembled them all, I steamed half of them and froze the other half for future fiestsas. 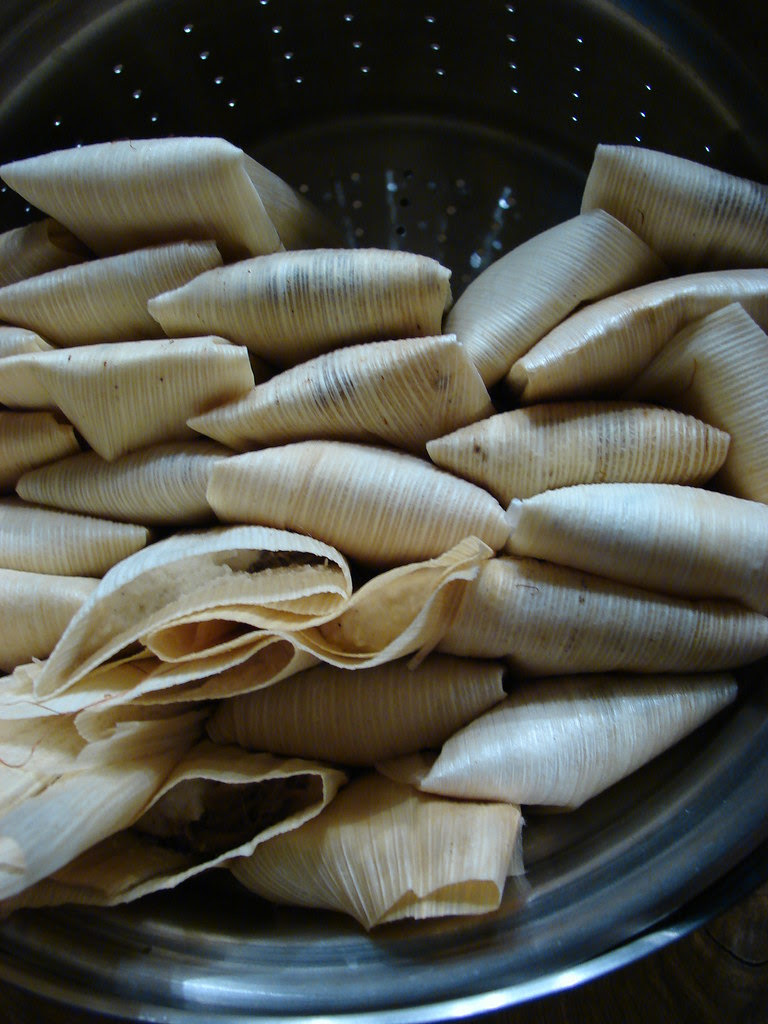 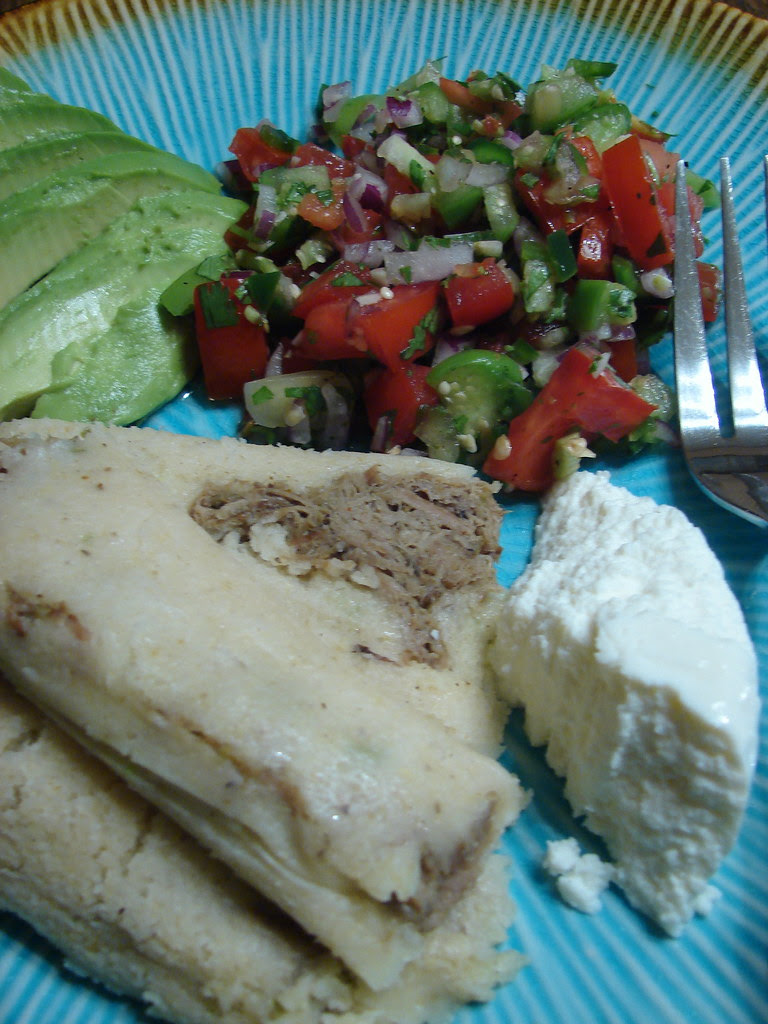 so you see, this really isn't a hard task, but it is time consuming. But it had the exact result I wanted.... it was relaxing yet productive. Very productive. I have 2 large containers of tamales in the freezer and one large container of them in the fridge. I made some fresh salsa to go with them... chopping vegetables is another good meditative process, I find. Tomatoes, red onion, jalepenos, tomatillos, garlic, cilantro, lime juice, salt & pepper. Fresh, colorful, a bit spicy, a bit tangy. Paired with the tamales, some queso fresco and some avacado, this was a very satisfying and eye-appealing meal. A great way to spend a Sunday evening in the spring. 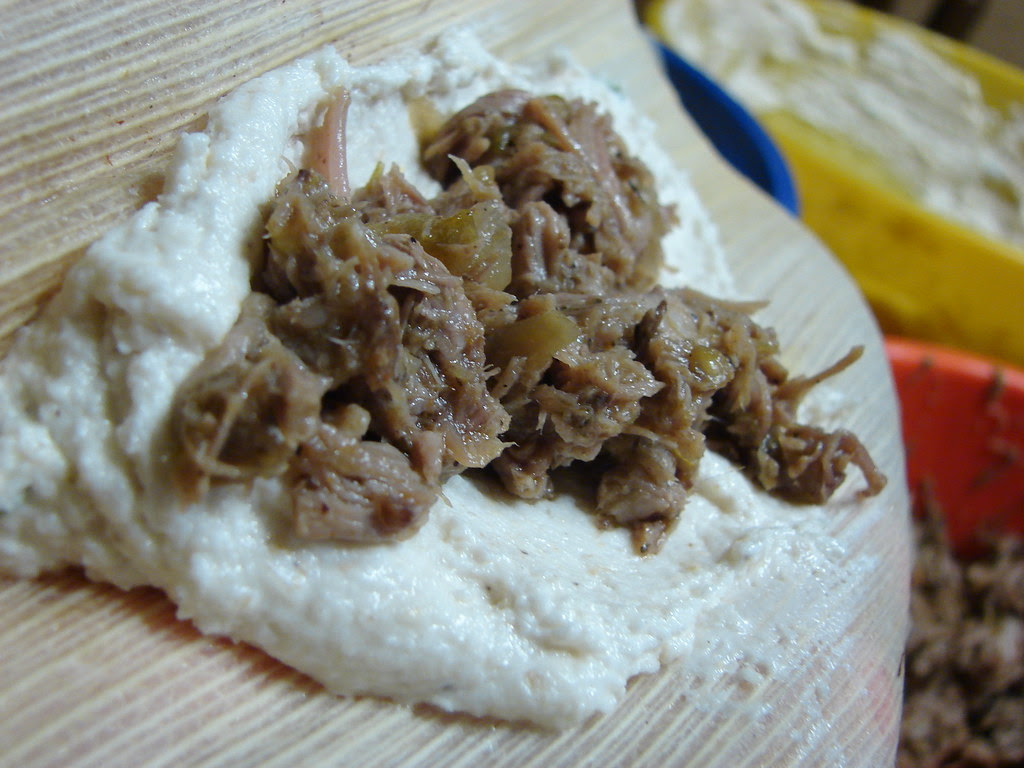 Check out my other Mexican food adventures...
Posted by ironstef 1 comment: