Corn soup for the end of summer 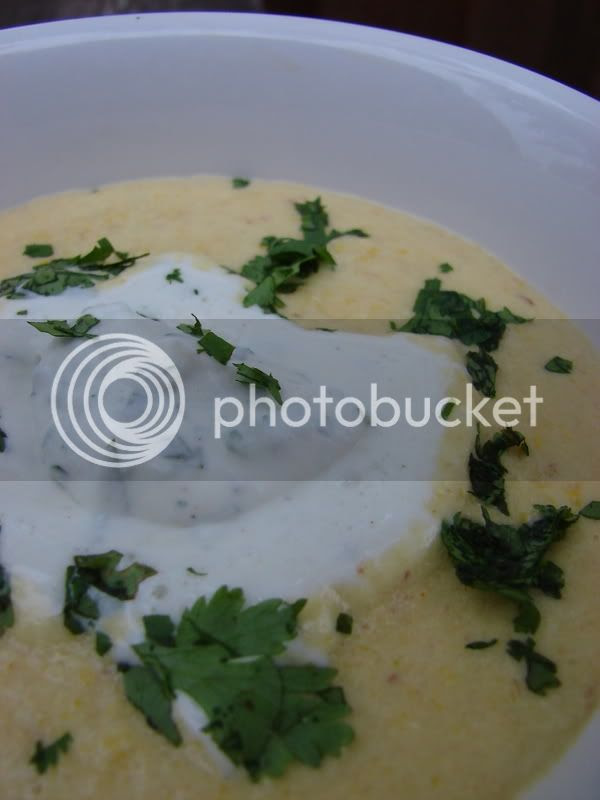 Last week, Jack sent me a scan of a recipe he found in a magazine. It was an end of summer soup created by Wolfgang puck. It sounded really yummy, so we made it for dinner last night. The weather has been cool and fall-like, so soup sounded nice...but it still had the summery taste of sweet corn, because we're not quite ready to let go yet. We enjoyed this with unfiltered wheat beer, hot rolls and open windows.

I put my notes in bold type...

Set box grater in wide, shallow bowl, coarsely grate 6 ears corn to make 2 cups grated corn instead of grating the corn, we but the kernels into the food processor. Cut kernels from remaining 4 ears to make 2 cups of kernels. In large saucepan, heat 1 tbsp live oil. Add bacon, celery, onion, yellow pepper; cover and cook over low heat, stirring a few times until softened, about 10 minutes. Add grated corn, milk, 1 cup heavy cream; bring to boil we used fat free half and half instead of the cream, a substitution we have made in several applications with success. It didn't work out so well for this soup, however, as it kind of separated. We fixed it by adding a little bit of real cream, and blending all of the soup up with a stick blender. Reduce heat to moderately low and simmer, stirring often, until soup is thickened, about 20 minutes. Season with salt and cayenne pepper, keep warm.

To create jalapeño crema, whip remaining 1/2 cup of heavy cream to soft peaks in blender, about 20 seconds I forgot to pick up sour cream at the store, so we just whipped more cream and added more lemon juice. Add sour cream, jalapeño, chopped cilantro, lemon juice, and blend until thick. Season with salt and white pepper. Ladle soup into bowls, top with spoonfuls of jalapeño crema and cilantro leaves; serve at once. Serves 6. 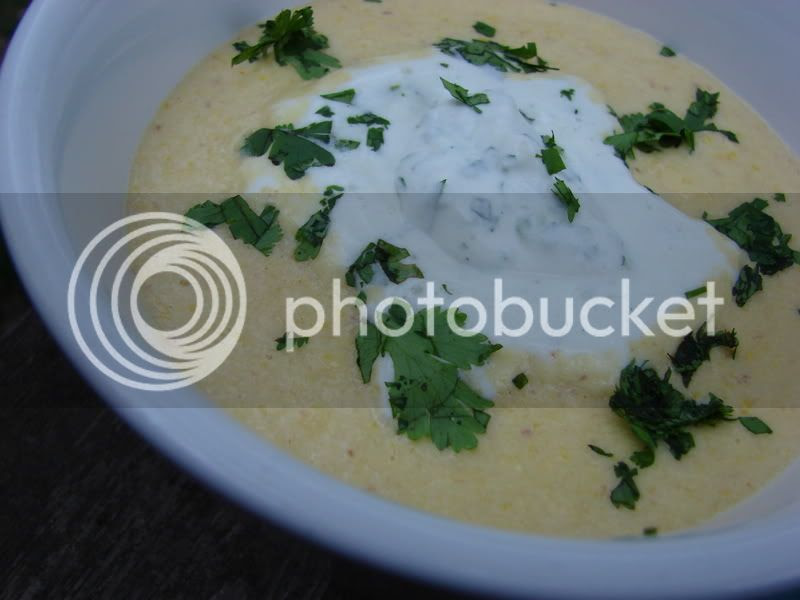 I think we'll be making this again. Next time with perhaps more bacon, and more cayenne. Jack thought it might be better suited as a sauce. Perhaps with seared scallops and a jalapeño oil instead of crema. Yum!
Posted by ironstef

If you want to use single cream (half and half in the US?) in a soup, you must let the soup cool, then add the cream, then slowly reheat it. If you don't, it will curdle and seperate. If you use double cream (or heavy cream)it will never curdle. I think the high-fat is a good compromise for the convieniance of not having to let anything cool.

B
Hand to Mouth

This recipe looks amazing... thanks for posting it.

Why is it that soup recipes always have to have a million ingredients? While I might spring for all the ingredients for this corn soup (cuz I do love corn), I probably wouldnt for other soupy recipes...