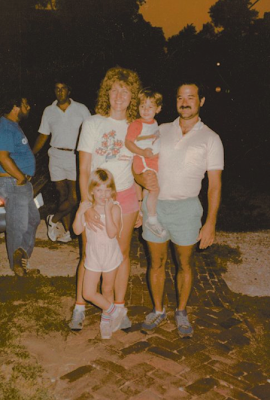 Ahh, childhood. I had a great one (despite my mom's obsession with perms and my dad's penchant for short shorts). Tastes and smells are a big part of our memories. I can't claim to have grown up with lots of home-made, wholesome meals... there were many many taco kits, Manwiches, boxes of Hamburger Helper and cans of Spaghetti-Os consumed. Now, my dad could cook, and would try to make meals from scratch when time allowed. And when he did, mmmm. SO good. His meatballs? fuhgeddaboutit.
One of the nights I am most nostalgic about was pizza night. Pizza night was great because my brother and I got to help my dad make the pizza. We got to choose the toppings, and help assemble... making it the best pizza in the world. My dad died when I was 16, so I treasure such evenings... he was the best father a girl could ask for. 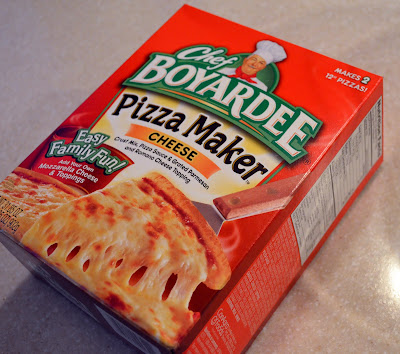 Here's where I lose my fooche-bag street-cred. The pizza I'm so nostalgic about? Chef Boyardee Pizza Kit. And my brother's and my toppings of choice? Jarred mushrooms and hot dogs, or the tiny pepperonis that sometimes came with the kit. I decided to make my favorite childhood pizza as an adult, so see if it was delicious as I remember. 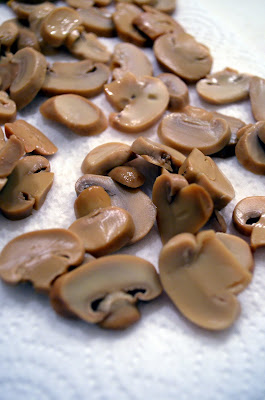 Jarred mushrooms were like candy to me. They were a special treat reserved only for pizza night and occasionally added to spaghetti sauce. On pizza night, one of the first orders of business was to drain the the little shrooms on paper towels. Throughout the pizza-making process I would sneak over to the counter they rested on and pop one in my mouth... I did this so much that I'm positive only half the jar ever ended up on the actual pizza. 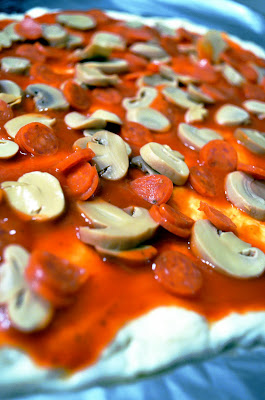 As a "grown-up" (and I use that term very loosely), I had a bit more self control and only snuck a few of the mushrooms. I found some mini-pepperonis at the store that looked like the ones from the old kits, and used those as well. I could not bring myself to put hot dogs on it (that was more my little bro's thing, anyway). When I mixed the dough (just add water!) the yeasty smell took me right back. Everything, from spreading the crust out on the oiled foil-covered cookie sheet, spreading the sweet canned pizza sauce, carefully and evenly distributing the toppings and mozzarella cheese... it all gave me warm fuzzies thinking about what a happy childhood I had. 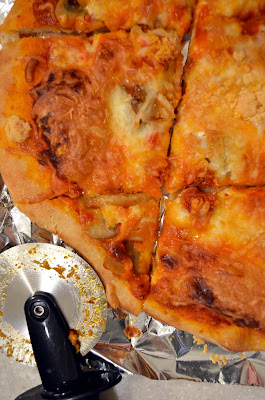 The pizza? SO delicious. Is my opinion clouded by nostalgia? Who cares?! This pizza, with it's sweet tomato sauce, soft, doughy crust and salty powdered cheese on top made me happy. 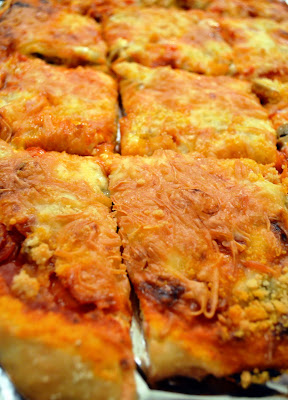 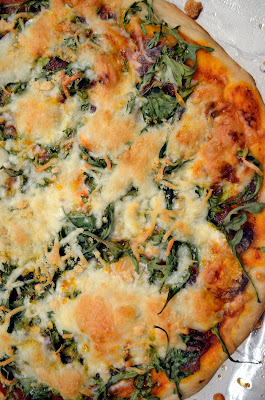 I thought I'd be clever and make the second pizza (I got the 2-pizza kit) with some of my favorite "adult" pizza toppings (no, not that kind of "adult"... ha ha... do they make pizza sauce flavored lube??) I added some fresh garlic and crushed red pepper to the remaining canned sauce, and topped the second pie with the doctored sauce, caramelized onions, arugula and anchovies. 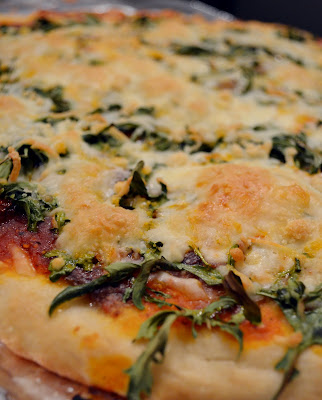 It was tasty, for sure... arugula rules on pizza, but if given the choice, I would want the pizza kit pizza of my youth. Playing in the sprinkler, picking dandelions, chasing lightening bugs... and making pizza... I was such a lucky kid.
What foods bring you back?
Posted by ironstef

That was a very pleasant and sweet post. Thank you.

Love this post! I remember "breakfast for dinner" night very fondly. Once, on St. Patrick's Day, we made green pancakes, despite having zero family ties to the Emerald Isle. It's a wonderful memory.

Wow! I remember that pizza kit! I used to love it! I had totally forgotten about that. Thanks for the trip down memory lane.