what I made for thanksgiving 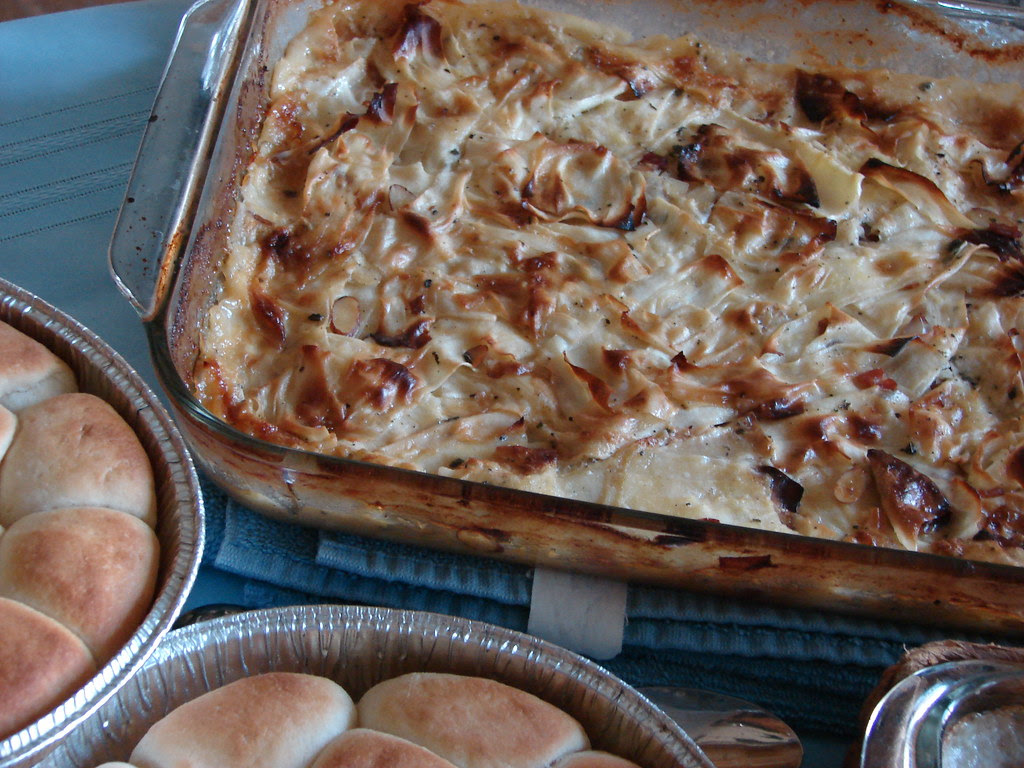 I spent this thanksgiving with a dozen or so family members at my grandma's house this year. I was to bring a side dish and a dessert. For a side dish, I decided to spring something new on the fam...Parsnips. I know parsnips are not new, but I never had them growing up and most of the people I know have never had them.

I only first had parsnips a couple of months ago at a vegetable cooking class I took through work. This recipe is from that class, taught by Schnucks Food Expert Kathy, with a couple modifications...for one, when I did a trial for my immediate family, my smart, handsome little brother suggested that I add some garlic. Also, the original used fresh sage sprinkled on at the end...I used dried sage which I added before cooking. I used my thumb eater mandoline to slice the pasrnips into thin ribbons.

So how did my family react to this unfamiliar vegetable being thrust upon them? They loved it! Yay! I mean, there was bacon in it...and heavy cream...but wooo! I introduced people to a vegetable!

Preheat oven to 400 degrees. Sauté bacon in heavy medium skillet over medium-high heat until golden brown about 6 minutes. Drain bacon on paper towels and set aside in a 9x13 baking dish. Using some of the remaining bacon grease, saute the garlic until it is slightly brown and soft; set aside in a medium bowl. Using hands, toss the pasrnips, bacon and almonds together in the baking dish and spread out in an even layer. Combine cream, broth, cooked garlic, sage, salt, and pepper in medium bowl. Pour over parsnip mixture.
Bake gratin 30 minutes. Press down on parsnips with spatula to moisten evenly. Continue baking until parsnips are tender and liquid bubbles thickly, about 35 minutes longer. Let stand 10 minutes before serving.

Dessert is something that was untested. I thought of it while shopping for the parsnip gratin ingredients. Pumpkin Cheesecake. Luckily I have a new handy-dandy iPhone, so I was able to google a recipe right there in the store. How did I ever live without this brilliant piece of technology?!?! Ahem. So, the first result when I looked up "Pumpkin Cheesecake" was this recipe on Joy of Baking's website. A trusty source, no doubt, so that's what I went with. Besides, it had the ginger-snap crust I had been envisioning in my head when I first got the idea.

Of course I didn't read the recipe completely to see that the cooled cheesecake was supposed to chill for AT LEAST 8 hours before serving. And here it was coming out of the oven at noon on Thanksgiving day. I R SMRT. Oh well...it chilled for a few hours anyway, and was perfectly fine when we dug in. I guess if it were properly chilled, it would have been firmer, but it was silky and yummy just the same. 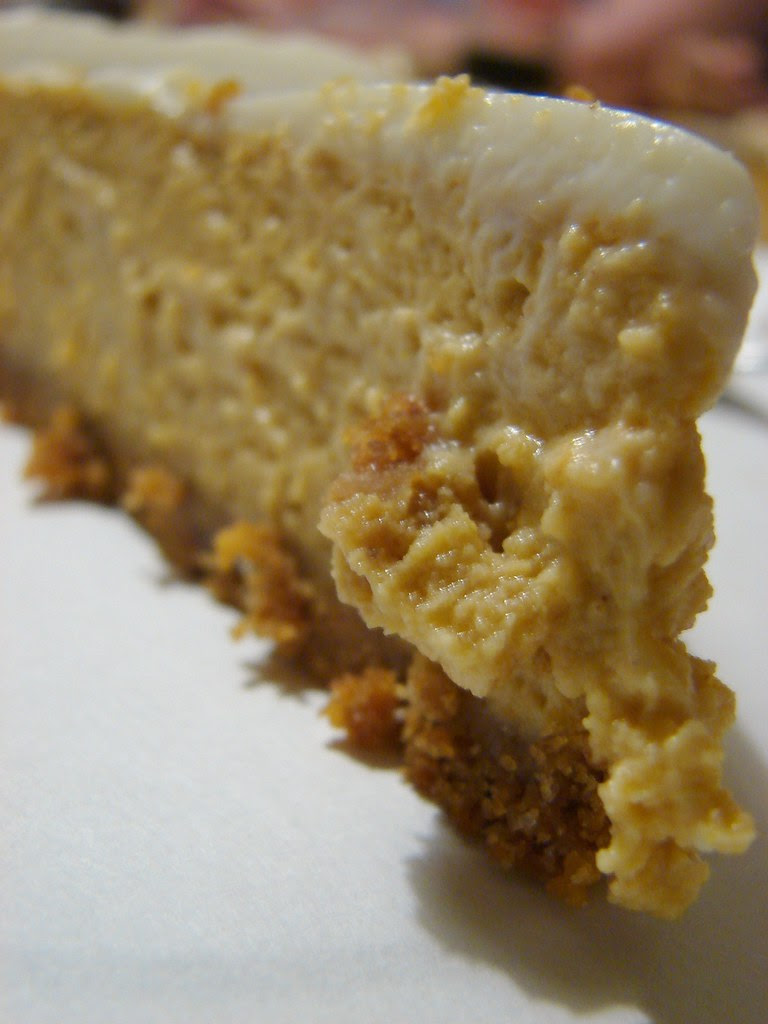 Preheat oven to 350 degrees F (177degrees C) and place the oven rack in the center of the oven.  Butter (or spray with a non stick spray) an 8 inch (20 cm) spring form pan.
For Crust:  In a medium sized bowl combine the graham cracker crumbs, finely ground ginger snap cookies, sugar, and melted butter.  Press the mixture onto the bottom of the prepared spring form pan.  Cover and refrigerate while you make the cheesecake filling.

For Cheesecake:  In a separate bowl, stir to combine the sugar, cinnamon, ginger, cloves, nutmeg, and salt.
In the bowl of your electric mixer (or with a hand mixer), on low speed, beat the cream cheese until smooth (about 2 minutes).  Gradually add the sugar mixture and beat until creamy and smooth (1 to 2 minutes).  Add the eggs, one at a time, beating well (about 30 seconds) after each addition.  Scrape down the sides of the bowl and beat in the vanilla extract and pumpkin puree.
Pour the filling over the chilled ginger crust and place the spring form pan on a baking sheet to catch any drips.  Place a cake pan, filled halfway with hot water, on the bottom shelf of your oven to moisten the air.  Bake the cheesecake for 30 minutes and then reduce the oven temperature to 325 degrees C (165 degrees C) and continue to bake the cheesecake for another 10 - 20 minutes, or until the edges of the cheesecake are puffed but the center is still wet and jiggles when you gently shake the pan.

Meanwhile whisk together the sour cream, vanilla extract and sugar.  Pour the sour cream mixture over the top of the baked cheesecake and rotate the pan slightly to evenly distribute the topping.  Return the cheesecake to the oven and bake about 8 minutes to set the topping.  Remove from oven and place on a wire rack to cool.  Loosen the cake from the pan by running a sharp knife around the inside edge (this will help prevent the cake from cracking).  Then place a piece of aluminum foil over the top of the pan so the cheesecake will cool slowly.  When completely cooled, cover and refrigerate at least eight hours, preferably overnight, before serving.

Those parsnips are the bestest!!