not so awful for my first falafel

UPDATE! My Knight in Shining Oil was able to rescue my falafel! See below.... 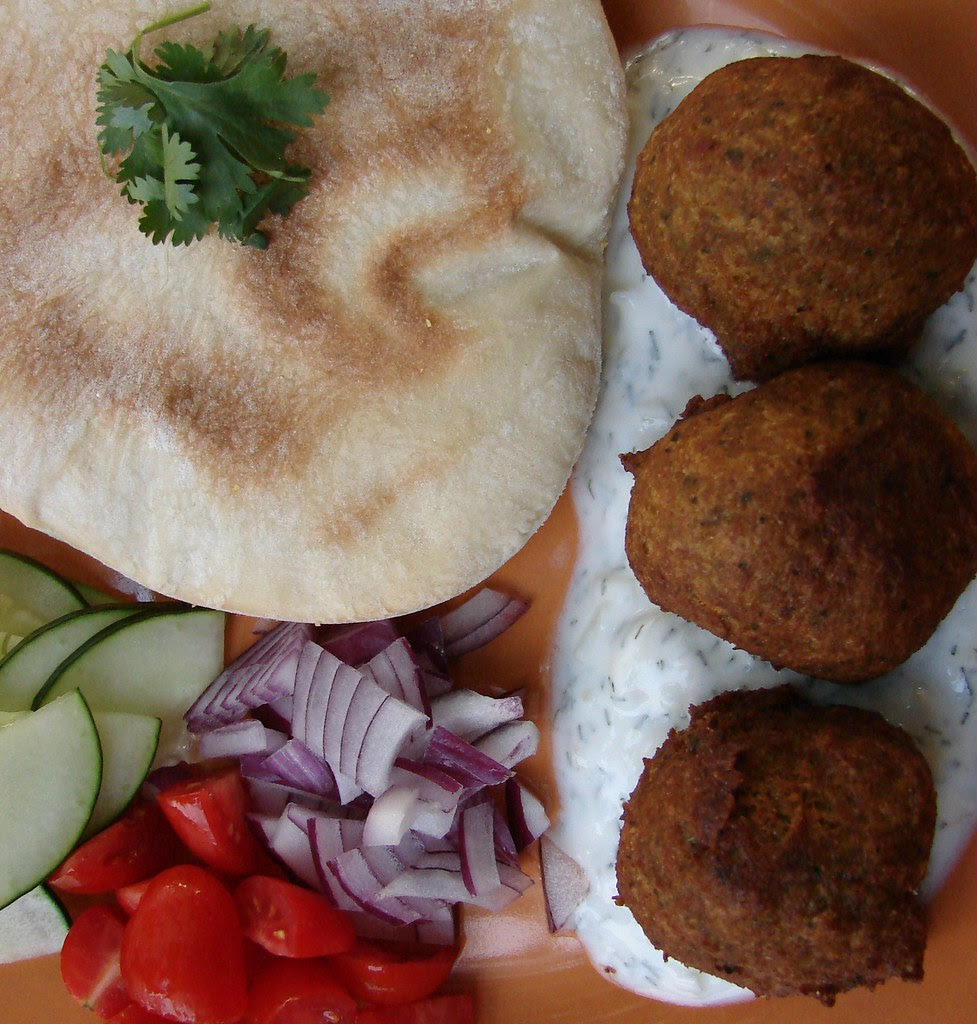 I love falafel. I usually get it from my favorite gyro place, Pita+ in Creve Couer, MO. This weekend, however, I decided to make it myself. Along with the pita bread! Yikes. I found a recipe online called "My favorite Falafel," and noticed in the search results, that it had my pal Nupur's seal of approval as well. Seemed like a winner to me! As for the pita bread, I chose this recipe, because it seemed easy (duh...it's called Carol's Easy Pita") and not very time consuming.

The falafel had good flavor, for sure. However, I got confused (happens easily) by some of the recipe instructions, specifically this part: "You want to add enough bulgur or flour so that the dough forms a small ball and no longer sticks to your hands." I had it in my mind that the "dough" would form a ball in the mixer, like a bread dough or something. O should have known better, as falafel is not at all bready, and should be indeed crumbly and moist. But "ball of dough" was in my doughy brain, and I kept adding flour to try to get this result. Of course, it never got that way even though I added probably double the amount of flour the recipe called for. I gave up and put the mixture into the fridge. After turning my thinking cap on and re-reading the recipe instructions, I see that I was supposed to form a small test ball in my hands. *Homer Simpson voice* Dough! 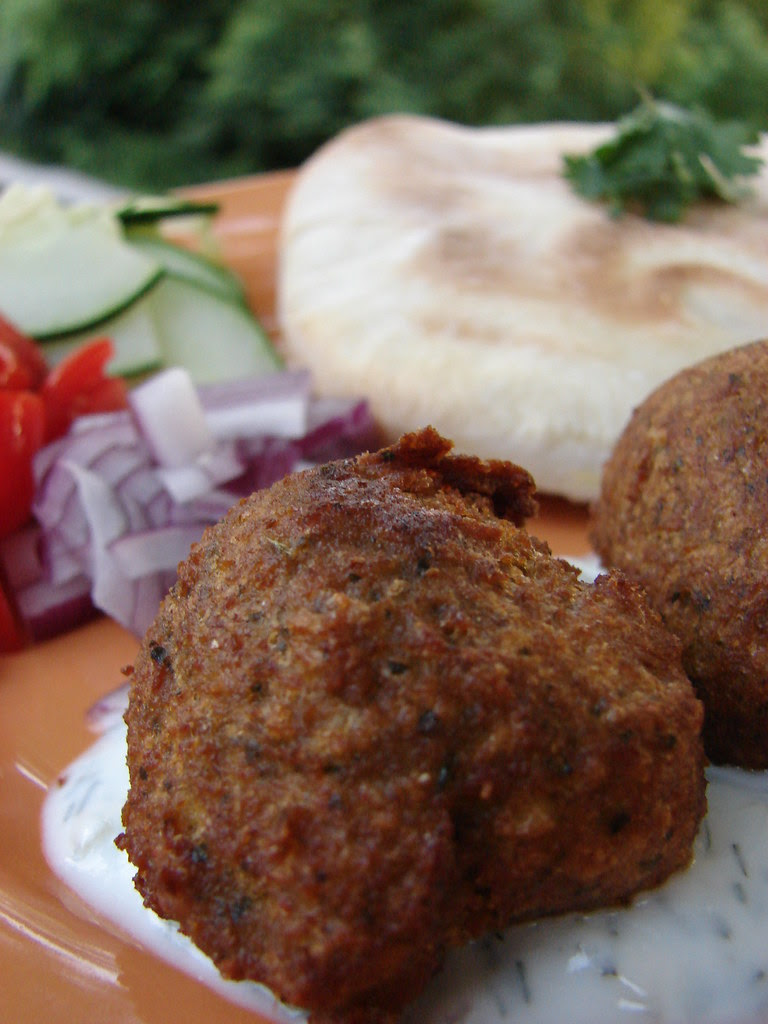 Anyway, I used an ice cream scoop as a measure, and deep fried the falafel. Like I said, the flavor of these was really good. The texture, due to my mistake, was dense and bready, though. I'll have to make these again, and next time I'll bring my common sense cap along.

The pita were too fluffy and flavorless. I don't think I did anything wrong on that recipe, but who knows...I was apparently in FAIL mode that day. It was an easy recipe, but I was not happy with the results, so I might look for different recipes for pita. Any suggestions?

Here are the recipes:

3. Then mix in the remaining flour, using just enough to make a soft, sticky dough.

4. Turn out on floured board and continue to knead for 5 minutes.

6. Roll out each one to about 1/4 inch thick and 6 inches in diameter.

7. Place on very lightly greased cookie sheet sprinkled with cornmeal (although cornmeal is really not necessary if you don't have it).

10. Wrap immediately in a dishtowel for 3 or 4 minutes.

My Favorite Falafel
From here

1. Put the chickpeas in a large bowl and add enough cold water to cover them by at least 2 inches. Let soak overnight, then drain. Or use canned chickpeas, drained.

2. Place the drained, uncooked chickpeas and the onions in the bowl of a food processor fitted with a steel blade. Add the parsley, cilantro, salt, hot pepper, garlic, and cumin. Process until blended but not pureed.

3. Sprinkle in the baking powder and 4 tablespoons of the flour, and pulse. You want to add enough bulgur or flour so that the dough forms a small ball and no longer sticks to your hands. Turn into a bowl and refrigerate, covered, for several hours.

4. Form the chickpea mixture into balls about the size of walnuts, or use a falafel scoop, available in Middle-Eastern markets.

5. Heat 3 inches of oil to 375 degrees in a deep pot or wok and fry 1 ball to test. If it falls apart, add a little flour. Then fry about 6 balls at once for a few minutes on each side, or until golden brown. Drain on paper towels. Stuff half a pita with falafel balls, chopped tomatoes, onion, green pepper, and pickled turnips. Drizzle with tahina thinned with water.

UPDATE!!
Jack came to my rescue (once again!) and found a solution to make the rest my overly-floured falafel mixture (I had made a double batch...)work. So, my falafel didn't work as balls. However, it happens to work brilliantly as flat discs! 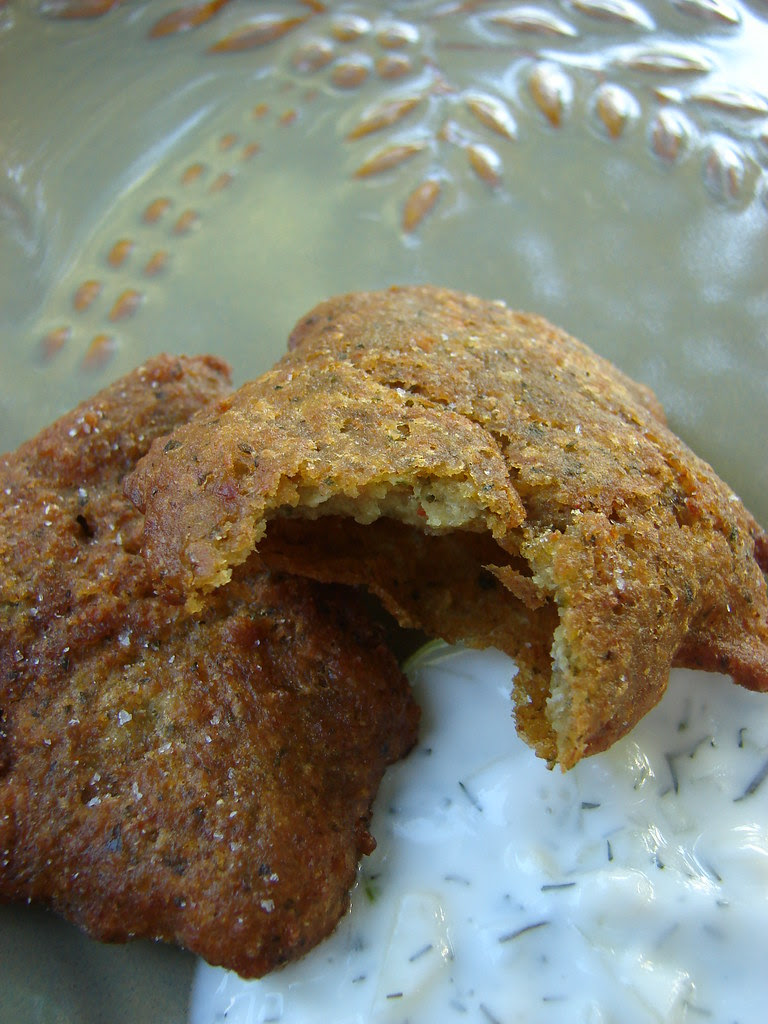 Crispy and golden on the outside, airy on the inside. I was so thrilled, because like I said, these had good flavor all along, I was just disappointed by the texture. Making them a smaller, flatter shape let the deliciousness shine! These would make a good appetizer. Thanks, Sir Jack!
Posted by ironstef

For some strange reason, falafel is one of these food items that I have a craving for once in a while. Never been satisfied with falafel from a restaurant though. Might be time to make my own.

Thanks for sharing your first attempt!

I mixed falafel in the food processor and posted a pic of what the "dough ball" looked like:
http://www.barbaricgulp.com/2008/04/falafel-bento.html

I'm a lurker on your site, but had to comment when you mentioned Pita+. We ate there for the first time ever this past weekend and it was amazing! I couldn't believe we'd been missing this gem of a place for so long!

oohhh~ i love falefel and i'm going to have to definitely try this. thanks!

Your photos look so delicious! This is my second spotting of falafel on food blogs in a couple of weeks and you're making me want to try them too!

oh my that looks yummy!! We are trying to stretch our budget and this would work so well for us- I have everything on hand! Thanks! Found you through Foodie Blogroll.

lol! And you're thinking, wait! I'm not on Foodie Blogroll! haha! Well, you should be! But I actually found you on FoodGawker. Shows you that I spend way too much time looking at food blogs - can't even remember how I got here. :)

I just made these two and LOVED them. I'll fry the falafel more next time, but they were amazing. Served both with eggplant caviar from http://www.samcooks.com/relish/eggplant.htm#EGGPLANT%20CAVIAR