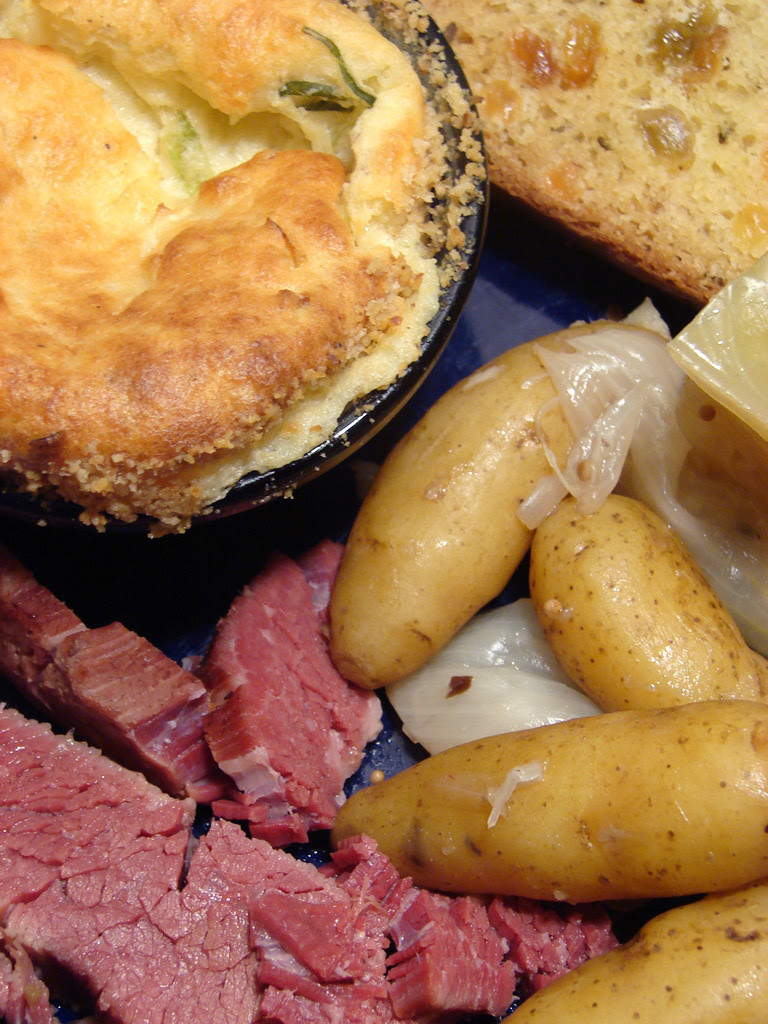 On St. Patrick's Evening I made and Irish feast that any leprechan would have been proud of.

It all started with my decision to brine my own Corned beef. I've made bacon, afterall, so this was just natural, you know? And like the bacon, I turned to Ruhlman. Charcuterie by Michael Ruhlman & Brian Polcyn, to be exact. A book I've raved about here before, and will continue to rave about because it is teh awesome. Anyway, the corned beef process went something like this: 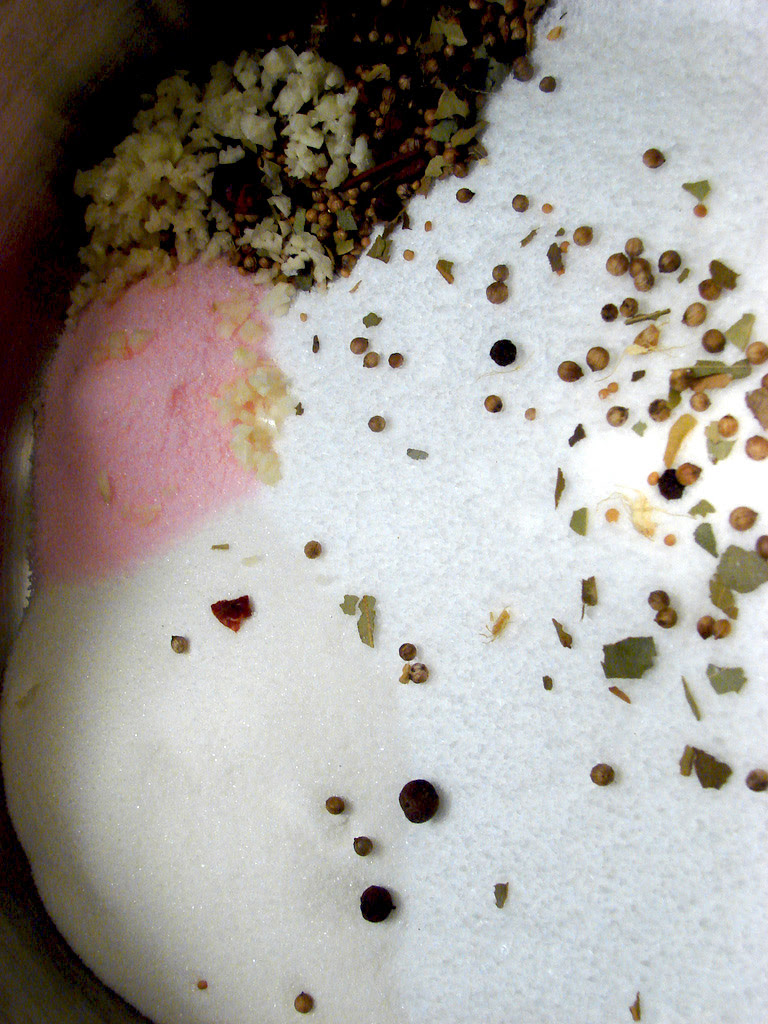 1 gallon water
2 cups kosher salt
½ cup sugar
5 tsp. pink salt
3 garlic cloves, minced
2 Tbsp pickling spice (as I was picking up individual spices, I spotted the already mixed pickling spice, and, being that it was way cheaper, used that. I did add a few more peppercorns and whole cloves, though, because I had them on hand I thought a little extra spice couldn't hurt)

Combine brine ingredients in a pot large enough to hold the brisket comfortably. Bring to a simmer, stirring until the salt and sugar are dissolved. Remove the pot from the heat and allow to cool to room temp, the refrigerate until it’s fully chilled. 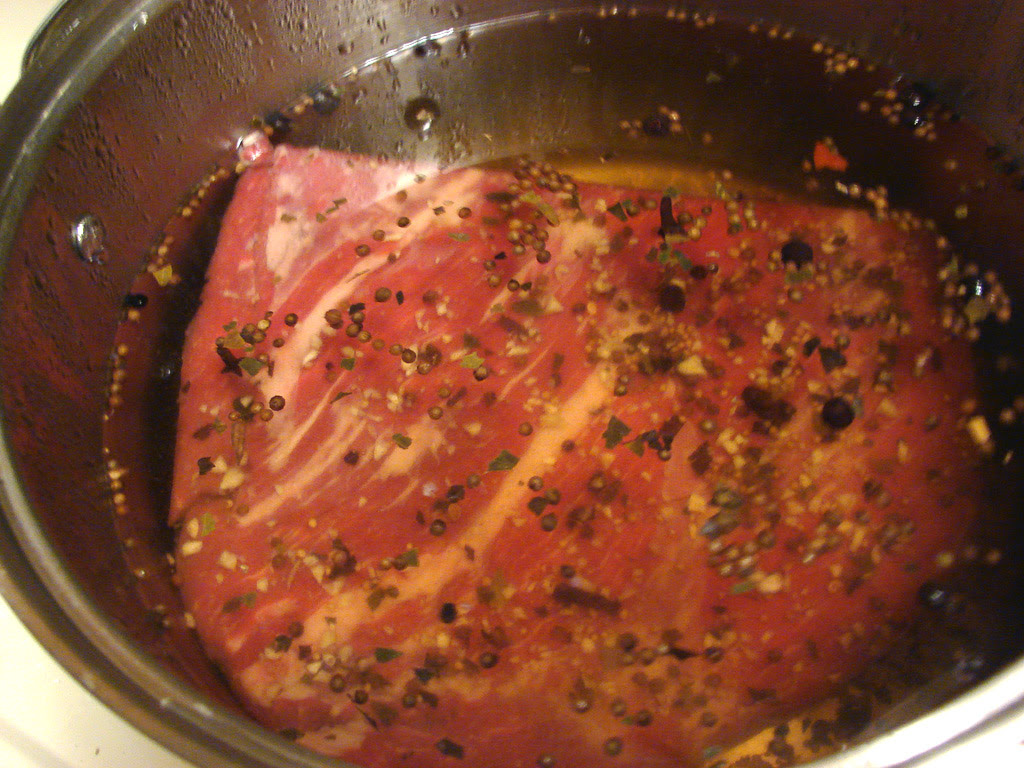 Place the brisket (Ruhlman's recipes calls for 5 lb., but I just got a 2.5 lb. one) in the brine and weight it down with a plate to keep it summerged. Refrigerate for 5 days. Remove the brisket from brine and rinse thoroughly under cool running water. 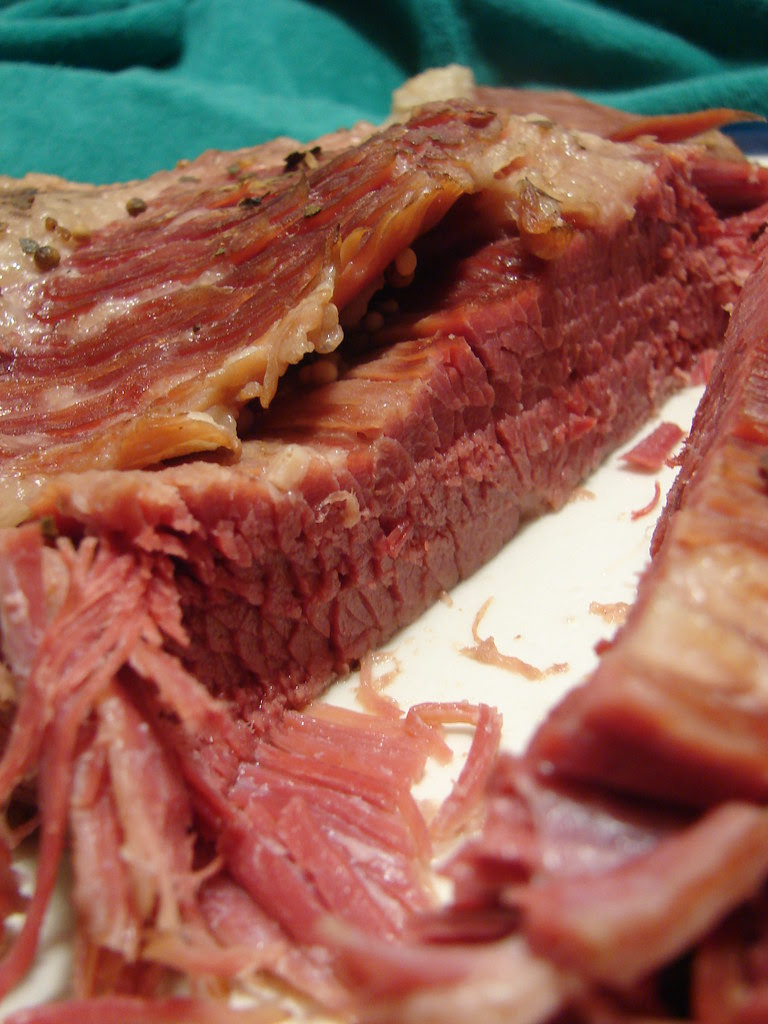 Cook the brisket...The book says to cover the beef with water, add 2 tablespoons of pickling spice, bring to a boil and simmer, covered, for about 3 hours. In order to have dinner ready at a decent hour, I employed my crockpot to do the cooking while I was at work. So, cover meat with water in crock-pot, add 2 Tablespoon pickling spice, and cook on low for 7-8 hours. Next time I will wait for a weekend so I can cook it on the stove and keep my eye on it. The crockpot overcooked it a bit...not that it was overly dry or anything, it just fell apart when cut, and I'd like to try and get sandwich slice-able results.

Yes, this was a bit more expensive than buying a pre-packaged corned beef from the grocery store, which are deeply discounted during the week around St. Pat's. It was worth it, though. Not only is it satisfying and fun to brine/cure your own meat, it tastes so much better! 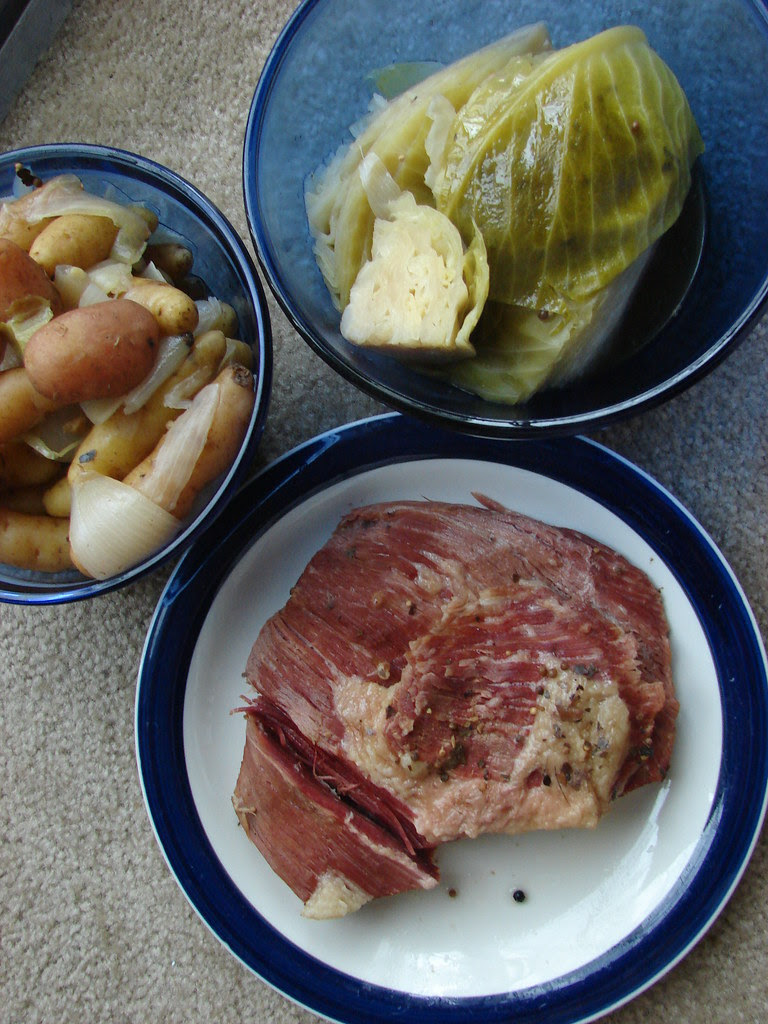 Knowing that the liquid that corned beef was cooking in was super-flavorful, I poured it into a large pot filled with fingerling potatoes, a cabbage cut into quarters, big hunks of onion, some garlic cloves and a couple shallots. I added a bottle of Guinness Extra Stout to the pot, and water to cover everything, and simmered it all on the stove while I prepared other components of my big giant Irish feast (say 45 minutes to an hour). Now those were some tasty tasty veggies! 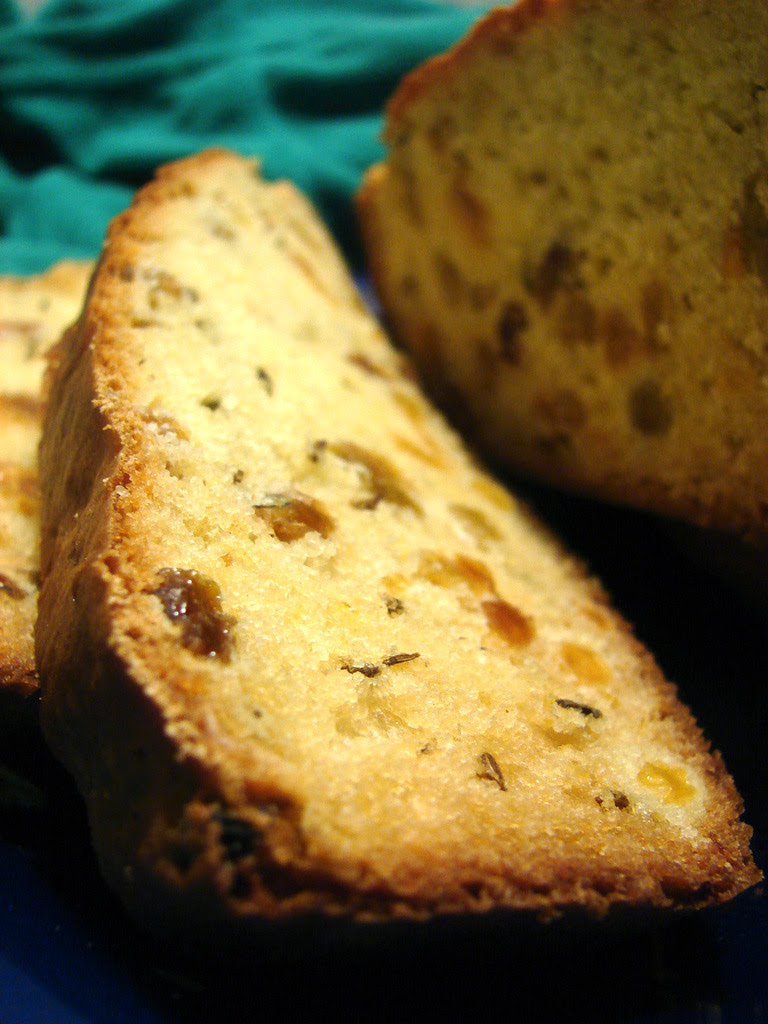 Next up was some Irish Soda Bread. The St. Louis Post Dispatch ran this recipe for "Mary Degnan's irish Soda Bread," with golden raisins and caraway seeds. I had to try it...it intriqued me. I'm glad I did, for it was easy to make, and REALLY really good! Here's the recipe:

Preheat oven to 350 degrees. Grease and flour a 9-inch round cake pan. (I used a round glass casserole)

In a large mixing bowl, whisk together flour, sugar, salt, baking powder and baking soda. Stir in raisins and caraway seeds. Make a well in the center, and add the eggs, buttermilk and melted butter. Mix well.

Transfer to the prepared pan; bake about 1 hour, until the top is golden and a skewer inserted into the center comes out clean.

And as if corned beef, cabbage, potatoes and bread were not enough, I simply HAD to make a souffle. You see, I have this book out from the library called Full on Irish: Creative Contemporary Cooking by Kevin Dundon. His recipe for individual Potato and Cabbage Soufflés caught my eye. You may have noticed that I've been trying to learn and practice classic techniques. Not only would this recipe give me an excuse to make my first soufflé, it also requires a béchamel sauce. So, even though I had way too much food already, I went for it. It was the hardest thing I made all night...quite a few steps. Rewarding, though! 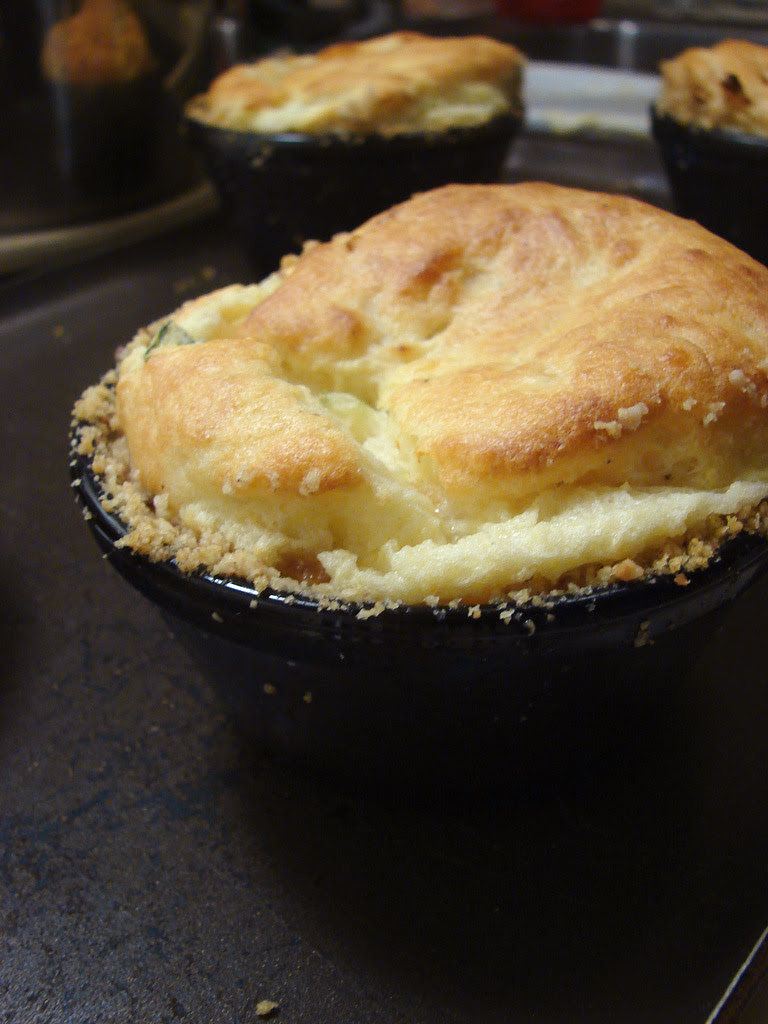 They rose and everything! Holy cow. Not too shabby for my first time. The only part that gave me troubles was the béchamel. With the roux and the 1 1/3 cup of milk it was still really really thick...more of a paste than a sauce. I know it was supposed to be thick, but this just seemed wrong, so I kept adding milk, and when that ran out I added some chicken stock, all while whisking away, until it was a thick sauce. It was successful...smooth and all that, so I think I did the right thing. Here's the recipe, with some of my own notes in italics:

For béchamel
1 stick butter
1 cup plain flour
1 1/3 cups milk (like I said, I used much more liquid than this...)
Salt and pepper

Prehet oven to 350. Grease 4 1 scant cup ramekins or oven-proof cups with butter and freeze until firm. Repeat 3 times in order to obtain a good coating. Mix together crumbs and nuts and use to lightly coat the final layer of butter

Make béchamel: melt butter in a pan. Slowly add the flour and cook for 1 minute, stirring constantly until the mixture becomes a light colored roux. Gradually pour in the milk, whisking constantly. Bring to a boil, again whixking constantly, then reduce the heat and simmer for 2-3 minutes until thickened and smooth. Stir the cheese into the sauce then remove from the heat and leave to cool a little. Season to taste and fold in the egg yolks.

Heat the remaining knob of butter in a frying pan. Add the cabbage and potato and cook over low heat for about 5 minutes, tossing occasionally. Fold into the thick béchamel and transfer to a large metal bowl.

Beat the egg whites in a separate bowl until soft peaks have formed, then carefully fold into the cabbage mixture. Divide among the prepared ramekins and gently tap each one on the work surface to expel any air bubbles. Arrange on a baking sheet and bake for 15-20 minutes or until well risen and lightly golden. 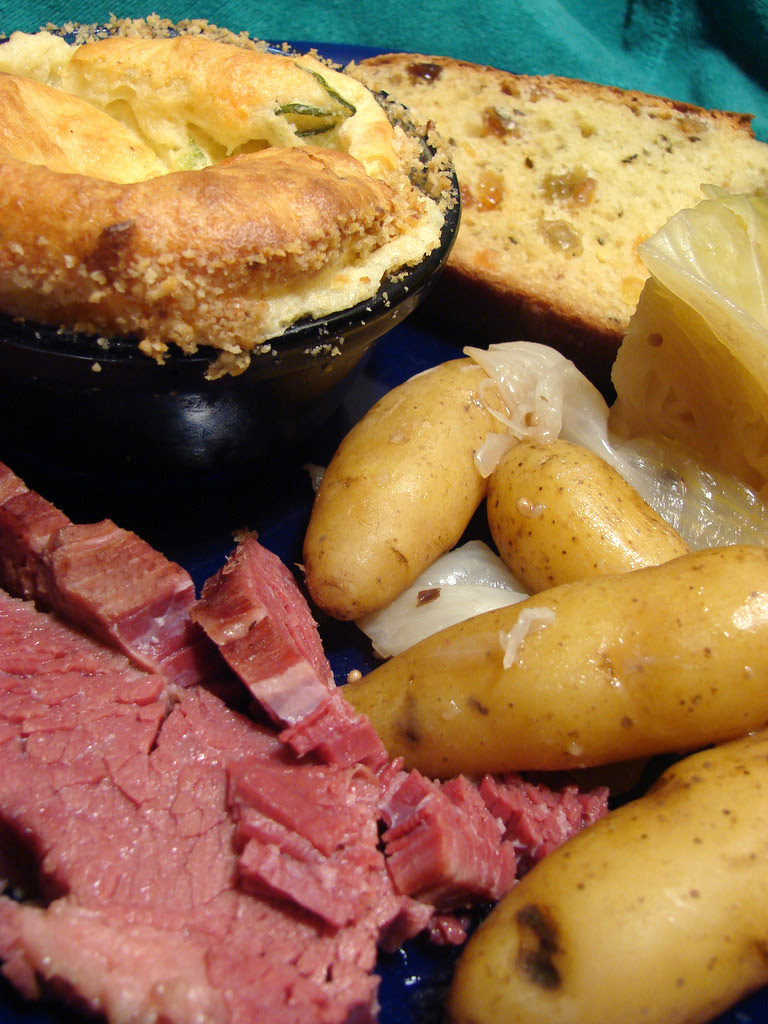 Whew! What a night! What a feast! What a fridge full of leftovers!!! it was fun, though, and delectable. And I had the help of Guinness, of course. Erin Go Bragh!
Posted by ironstef

I am so excited to find your recipe for corned beef. We have always wanted to try, but the recipes sounded to difficult for me. I am not great in the kitchen, in fact my husband calls me "Lucy" most of the time, but your recipe looks perfect. I am going to try it as soon as I have a free weekend. Thank you so much!

Thank you so so so much for posting this recipe!!! I am so excited to try this! I haven't had corned beef in years, and where I live you can't get it. Oh, I just can't wait!