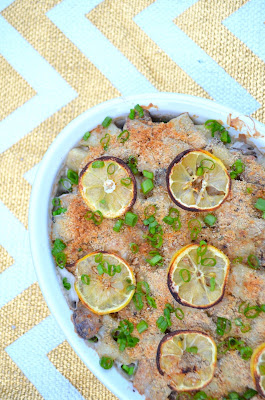 There was an awesome sale on potatoes over the weekend. I'm trying to reserve my meager funds for a couple of upcoming trips, so dinners are often based on what leftovers I have and what deals I can get at the grocery store. I had some leftover baked chicken and lots of potatoes. Casseroles are always an option for me. Hanging out at home, music playing, drinking martinis, wearing a sweet apron, making a creamy, comforting casserole? Dreamy. 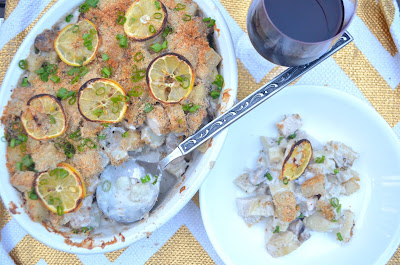 Bring a bot of water to a boil in a large pot or dutch oven. Boil the potatoes for 5-7 minutes until tender but not mushy. Drain, set aside.

Add butter and olive oil to the pot and cook the shallots until just just translucent. Add the mushrooms and a pinch of salt and cook until the mushrooms are brown and shriveled a bit. Sprinkle the flour over everything and stir to coat, cooking about 30 seconds. Add the half & half and bring to a simmer until slightly thickened. Remove from heat. Stir in the rosemary, 1/2 teaspoon of the truffle salt, lemon zest, chicken and potatoes.

Pour potato mixture into a buttered 2.5 qt. casserole dish (approx. 7" x 11"). Combine the breadcrumbs, 1/4 teaspoon of truffle salt and pecorino cheese and sprinkle on top of the potato mixture. Cut 1 Tablespoon of butter into small pieces and dot the top of the casserole with them. Lay the lemon slices on top. Bake at 400ºF for about 20 minutes until crumbs are browned. Let rest a few minutes before serving. 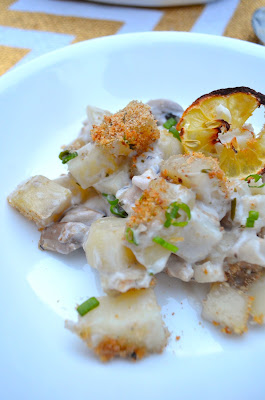 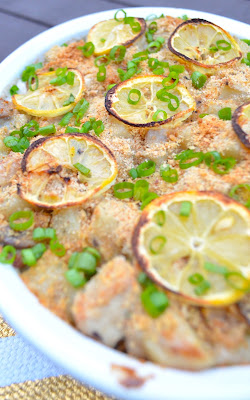 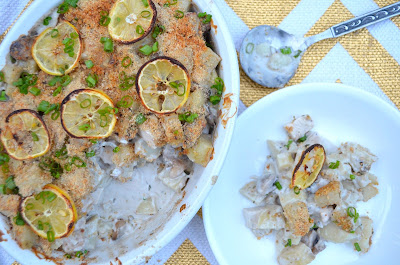