It's time to announce my 2013 theme of the year! What could possibly be better than 2012's Year of the Balls?! 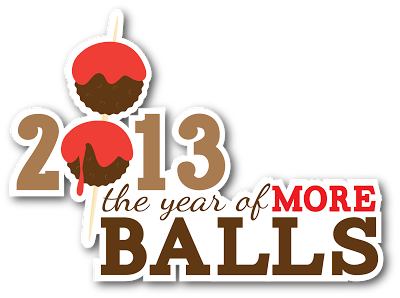 That's right! MORE BALLS (see the whole round-up [PUN TOTALLY INTENDED] of 2012's balls here)! What can I say? There is just way too much left unexplored in the spherical world of balls. I mean, I haven't even tried actual balls... you know, of the testicular variety. Anyway, when your favorite local weatherman and Cajun food truck conspire to tell you to stick with balls, you can't say "no", right? (Hey Glenn... I guess it's Cloudy with a Chance of Meatballs, eh? EH? buh-dum-ching.) 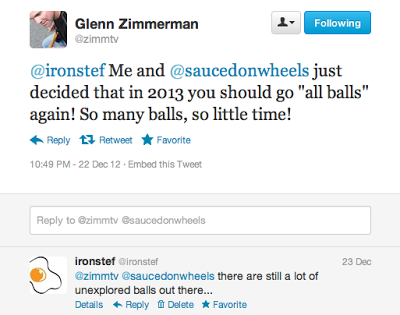 I mean, I have a whole Pinterest board dedicated to balls. I also have a list of ball ideas in a notepad. Not to mention the book my buddy Kelly gave me that sparked this whole thing in the first place. And, not to dwell, but the lack of testicles is bothersome. Also, a search for meatballs on Amazon revealed a whole bunch of ball books and accessories I want to get my ball-rolling little hands on:

The Meatball Cookbook Bible: Foods from Soups to Desserts-500 Recipes That Make the World Go Round

A Man and His Meatballs: The Hilarious but True Story of a Self-Taught Chef and Restaurateur

101 Things to Do with Meatballs

Let the Meatballs Rest: And Other Stories About Food and Culture (Arts and Traditions of the Table: Perspectives on Culinary History)

So 2013 is Year of MORE Balls. Hopefully it's as fitting a sequel as Meatballs II was. Oh wait.

I made buffalo chicken balls for the super bowl last year. This year I'm making actual buffalo wings but if a certain person were to bring along some balls of their choosing they wouldn't go amiss... i'm just sayin' :-)