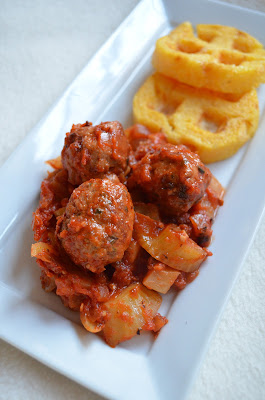 Thanks to pinterest, I have learned that my waffle iron is not just for waffles anymore. Biscuits, cinnamon rolls, cookies... all kinds of things can be cooked in a waffle iron! There's even a blog called Waffleizer, dedicated to all things waffle iron. Waffleriffic!! So I decided to stick some pre-made polenta into mine... I was so excited about this idea. It took way longer than I expected to get any sort of browning on them, but they did turn out super cute, and the different surface areas added more crunchy texture than just pan searing them. 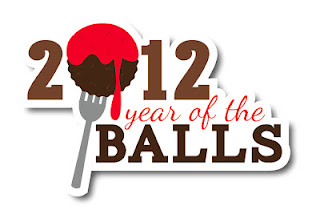 I made some quick cheater meatballs from fresh chicken sausages, and sauce chunky with fresh fennel. This is definitely a week-night meal... fast and easy 30 minute semi-homemade without the obnoxious television hostess. Speaking of obnoxious... will 2013 be year of the waffles?? 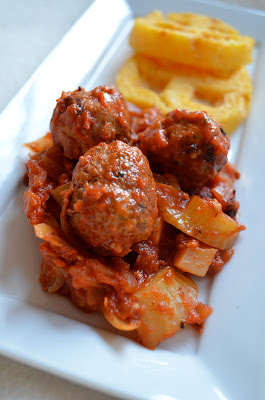 Heat 1 Tablespoon of oil in a dutch oven or large skillet. Pinch the chicken sausages out of their skins into small balls (about 5 balls per sausage) and cook in the oil until well browned and cooked through. Remove sausage and set aside. Add the other Tablespoon of oil to the pan and cook the onion, garlic and shallot in it, scraping up some of the browned pits of sausage fond as you cook them. When they are translucent, add the fennel and a splash of wine. Cook until the fennel is just soft. Add the tomatoes, juice and all, crushing the the whole tomatoes with a wooden spoon as you stir. Let simmer for about 20 minutes. Add the meatballs back in and heat through.

Meanwhile, slice the polenta into 1/2-inch slices and cook in a waffle iron until golden brown. Serve the balls and sauce over the polenta. 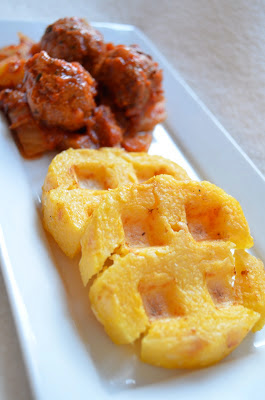