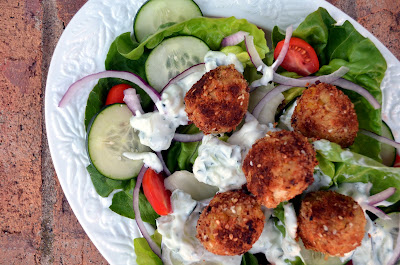 Yup! The Year of the Balls continues... Oh, and I figured it required a logo: 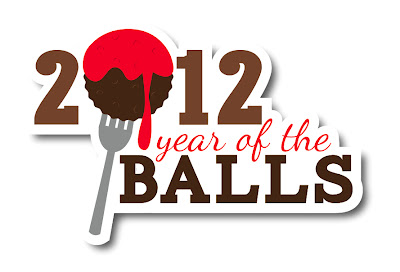 So On to these hummus balls... I know what you're thinking... "Stef... wouldn't that be falafel?" well... okay, yes, this probably is falafel. But, I was really going for the flavors of hummus and pita, so I'm calling them Hummus Balls. LET ME HAVE MY MOMENT! 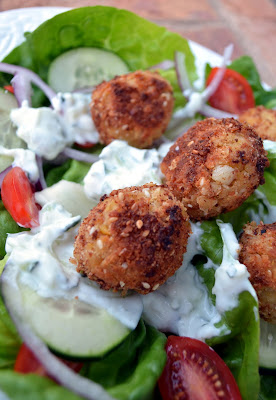 Ahem. I researched several bean ball recipes (heh... bean balls), and I wanted to make sure these weren't too dense or dry. I employed some basic meatball techniques to help with fluff and moisture... dairy, egg, bread crumbs. Other than that I used the basic flavors of a good hummus... chick peas, sesame seeds, lemon, garlic (have you seen this fantastic hummus tattoo? So smitten with it.) Unlike hummus, I used a potato masher to mash the chick peas into a more course texture, which I thought gave the balls a better texture... crumbly yet not too dry. 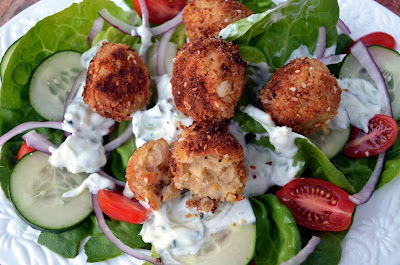 -Shred the cucumber and salt it. put it in a colander over a bowl to drain while you make the balls.

-Mash the chick peas until you get a nice mix of mush and small chunks. Add 1 cup of the pita crumbs, juice of half the lemon, 2 Tablespoons of yogurt, 2 Tablespoons of sesame seeds, the egg, 3 of the minced garlic cloves and the sesame oil. Use the masher to combine, season with salt and pepper, then your your hands to make sure everything is well combined. Roll the mixture into ping-pong ball-sized balls.

-To make the Tzatziki sauce, combine the rest of the yogurt with the shredded cucumbers, the other half of the lemon juice, the mint and the other clove of minced garlic. Refrigerate until ready to serve.

-Combine the remaining pita crumbs and sesame seeds and roll the balls in the mixture, gently pressing to make the crumbs stick.

-Coat a skillet with half of the olive oil and put over medium heat. Cook half of the balls in the skillet, turning so that all sides are golden brown. Wipe out skillet, add the rest of the oil and cook the other half of the balls. Serve on lettuce with tomatoes, cucumber, red onion and the tzatziki sauce. 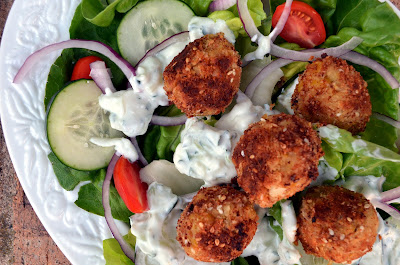 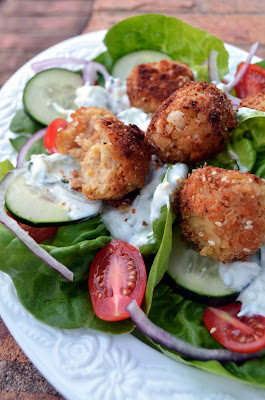 I love that you fluffed the balls...prrrrrfect.

The Balls 2012 logo is fabulous! And I really want to make those hummus balls.

Love the logo! And your balls (hee hee hee!) look delicious! I love hummus ... what a clever and unique way to make it!