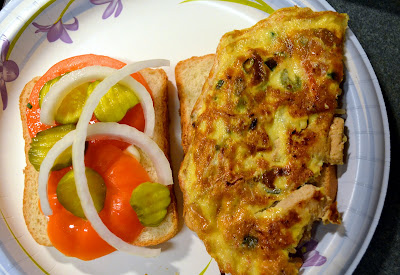 I follow up a post about how to take better food photos with... this weird blob? Yup. I gotta keep you on your toes, readers... this joint is a roller coaster! So what's the weird blob pictured above? It's my attempt at a homemade St. Paul Sandwich. For those of you not from St. Louis, let me explain. A St. Paul sandwich is an egg foo young patty, but instead of putting mysterious brown gravy on it, you put it on some wonder bread with mayo, tomatoes and pickles. 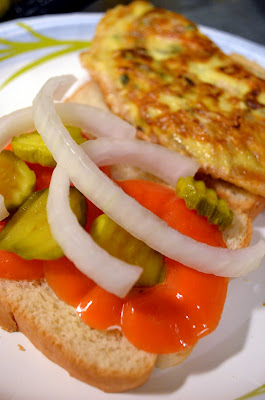 While the exact origins of The St. Paul sandwich are sketchy, it is definitely a St. Louis, MO thing. Should we be proud of this? Eh. We'll take the blame. Add it to the list of other questionable foods we are known for: provel "cheese", toasted ravioli, pork steaks with Maull's (the inventor is from my Hometown!), gooey butter cake. I say "questionable," but all these items have a special place in the hearts of all STL natives, including me. Be a cynic if you want, but this kind of food culture is great for a city! It unites people and gives them something uniquely their own.

In college, I worked a couple summers at a Chinese buffet/take out place. I got the job because I would walk to this place at least once a week for my pork fried rice and crab rangoon... I was a regular. Working there opened my eyes to the realities of Asian cuisine... namely the fact that American Chinese take out has very little to do with authentic Chinese food. In fact the people I worked for were Vietnamese, and they ate completely different food from what they cooked for the business. They ate MUCH better food. I loved it!

The St. Paul Sandwich? Not authentic Asian cuisine. I was never a fan... mainly because of the mayo and because, well, it's just such a monstrosity. A grossly overcooked omelet, soggy white bread, sad tomatoes and lettuce. I actually remember a lot of people ordering their St. Pauls with Egg Foo Young gravy ON THEM. Too bad that was before This is Why You're Fat existed.

So when my friend tweeted that he had his first St. Paul sandwich, and loved it, and was encouraging others to try it, I proposed that I make them all home made ones. I feel better about my friends at least eating something home made, even if it is the mutant St. Paul. 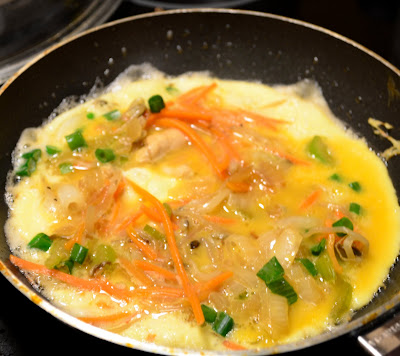 It's been years since I've seen one made, but I remembered it being pretty simple... scrambled egg, meat, beansprouts and onions all go together in a hot wok with oil and are fried until they are brown discs which can either be smothered in gravy or put on bread (or both, apparently). When I did some recipe research, I basically came across the same description. It really is that simple! Too simple to even write a recipe for. 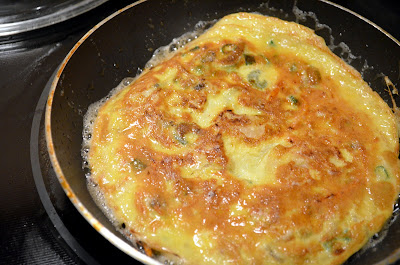 Here's how you make a St. Paul Sandwich:

-Thinly slice raw chicken breast or pork. marinate it briefly in soy sauce, rice vinegar and sriracha while you prep other components.

-Cook your meat of choice and set it aside.

-In same pan quickly stir-fry garlic, chopped onions, shredded carrots with some soy sauce and oil. Add lots of bean sprouts and cook until everything is just soft. Set aside.

-Scramble some eggs... figure a bit less than 2 per sandwich.

-Fill a ladle halfway up with meat and vegetables, then fill the rest with scrambled egg.

-Ladle into a hot skillet and let fry until browned, then flip and cook the other side. I used a small skillet so it made a nice 5-inch circle. If you don't have one you will have to use your spatula to keep the egg patty nice and compact. 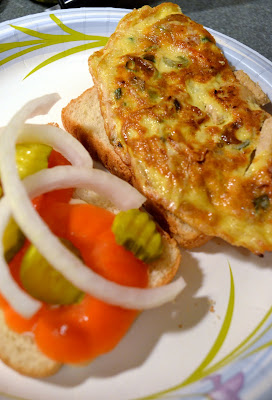 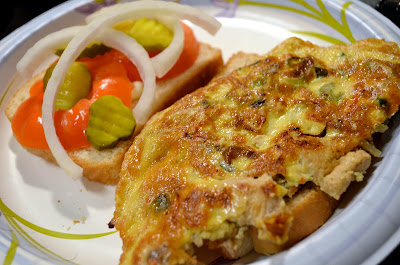 There's a carryout Chinese place in Valley Park that puts broccoli in their veggie St. Pauls. It's surprisingly good.

Egg Foo Young is not prepared in a skillet. It is made in a wok, filled with hot oil, the lade is not use to measure, it is used to gently lower the egg mixture into the hot oil and keeping it a circular patty, it is never flipped. Hot oil is ladled over the top after 2 minutes of cooking. The patty is then removed using a slotted wok spatula and the excess oil is pressed out of the patty using a second slotted spatula.

St.Pauls are my favorite food in St. Louis. I am from Detroit, and have traveled and found this dish nowhere else. I especially live that I can get a combination St. Paul, which means I can get ham, beef, shrimp, and crab in it. Never got into the duck ends (ugh). Terriyaki duck was excellent but the St. Paul is my St. Louis favorite.