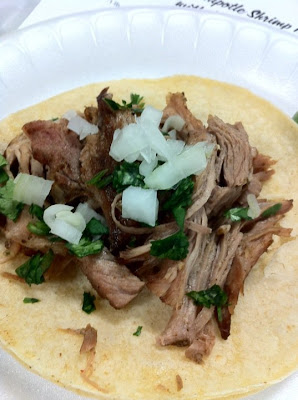 I work for a grocery store chained based in St. Louis called Schnucks (out-of-towners seem to think this is a funny name...). I am a graphic designer, but the company has been really good the past few years encouraging ALL of it's employees to become "food experts." One way they help is by offering free classes to us, usually taught by co-workers or vendors. I've been to many of these classes, and I think it's such a great perk.

People at work are aware of my blog... in fact they gave me a special award for my enthusiasm towards food knowledge/learning. So, whenever I am in one of these classes, people suggest that I teach a class. Yikes. Well, I finally decided to try it out. I picked tacos as my subject matter. Because, well, tacos rule... they are easy, flavorful, ethnic, versatile... I figured I could talk about tacos enough to occupy people for a while. 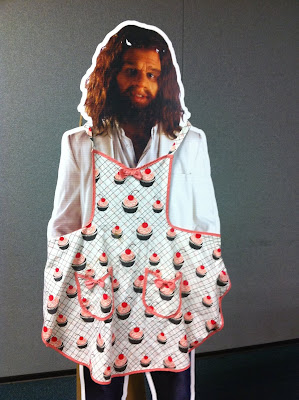 This was my helper, Walter the Geico caveman. I brought him from my cube to show the class that tacos are so easy... you know. :)

I made 4 tacos... Carnitas, shrimp, veggie and beef/bean fried tacos. The recipes all follow. The class went okay. I enjoyed the cooking and prepping more than the public speaking part, but I spazzed, mumbled and rambled my way through for an hour and a half. It was nerve-racking, but I am glad I did it. I think people at least learned some tidbits. Plus? They got to eat 4 of my favorite tacos. 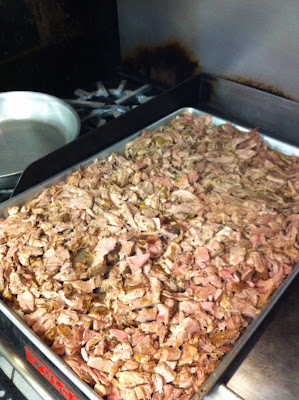 CARNITAS. LOOKIT ALL THAT GLORIOUS PORK!!!

Heat up a couple Tablespoons of oil in a skillet. When skillet is hot, sear the pork
on all sides. Let cool a bit. Combine all the spices and rub them all over pork.
Place pork, onion, garlic and pork necks in a crock pot with about ½ cup of water.
Cook on low for about 10 hours. Remove from crock pot and let cool enough so
that you can handle it. Using 2 forks, shred the pork into bite-size strips. Lay pork
pieces out on a sheet pan or a glass baking dish, and cook in a pre-heated 450ºF
oven until the edges get crispy, about 10 minutes. Serve on 2 warmed corn tortillas
with chopped white onion, cilantro and a squirt of fresh lime. 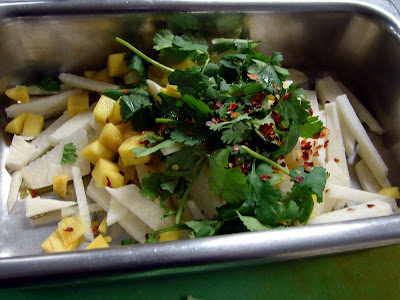 Jicama-Mango Slaw for the shrimp tacos. 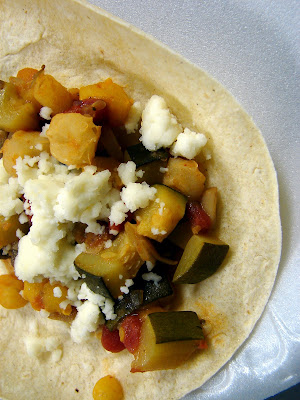 Vegetable tacos with Hominy.... mmmmm... these were a surprise hit!

In a skillet, heat the oil til shimmery. Add the onion and sauté until softening
and beginning to brown, add the mushrooms and cook, stirring often until
beginning to soften.

Add the tomatoes and chipotle to skillet and let cook down a bit, until the
consistency of tomato sauce. Stir in the zucchini and any other vegetables.
Season to taste. 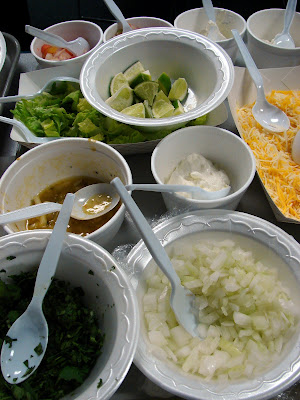 Toppings for fried tacos. Stole this idea from Kelly.

Cook beef and seasoning according to the directions on the taco seasoning package.
Add refried beans and combine. Put about 3 Tablespoons of the filling into each tortilla and
fold over. Fry in a skillet filled with a shallow layer of oil until golden brown on each side.
Fill with cheese and whatever toppings you like. 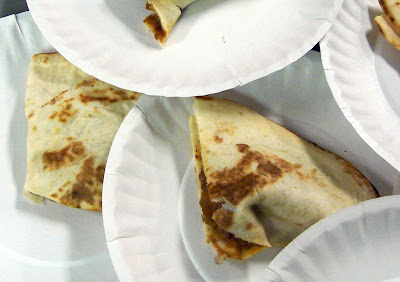 The "fried tacos" were cooked by a friend ahead of time, and were more grilled than fried... still a crowd pleaser this way. They are supposed to be crispier and more golden brown... we just didn't use much oil for these. 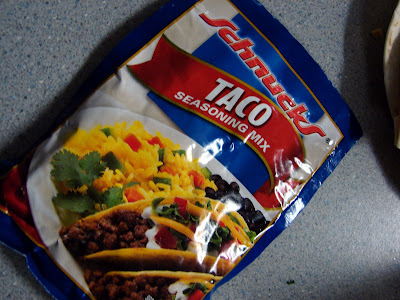 
I did not make these in class, but I gave everyone the recipe. LOVE this margarita recipe... it tastes great, and will knock you on your arse if you're not careful :)

Killer Margaritas
1 can minute made limeade, 3 cans water, 1 can fresh squeezed lime juice +
key lime juice from a bottle, 1 can tequila, 1 can triple sec...this makes a nice
big pitcher and packs a good punch. Rim your glass with a mixture of kosher salt
and lime zest. Serve on the rocks!

I added this bonus recipe for fun. I didn't make them in class, but everyone wished I had. The idea came from my Bro-in-law Josh. Josh is a circus performer.... juggler, magician, clown, general feats of ridiculousness-doer. He also likes to cook. He had a video of himself making these Smacos at his delightful one-man show, "Jadoo", as a way to keep the audience entertained while he set up to do his "Chef" character (see video). Part s'more (one of my favorite foods!) part taco, these are a silly little dessert that kids would have fun helping with.

Place a tortilla in a hot skillet or griddle that coated with oil or non-stick spray. Sprinkle
some chocolate chips on one side of the tortilla, along with some marshmallows. Fold the
tortilla over the fillings. Cook until golden and crispy on one side then flip and cook until
both sides are golden.


So there we have it. My first teaching gig. Not a rousing success, but a fun learning experience. Mmmmm.... tacos.

fish tacos with all the fixin's
Posted by ironstef

Those all sound amazing! I'm sure your class was awesome. I mean, you can't go wrong with tacos. Let me know if you teach another one, I'd love to come!