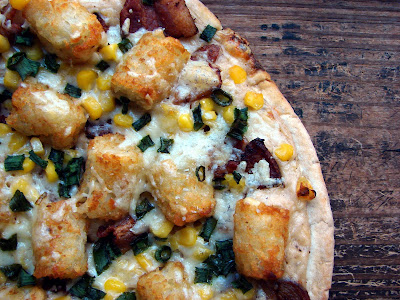 I've done tater tot tacos. It's only natural that I attempt to make those little golden nuggets of trashy deliciousness work on top of a pizza. I mean I've made potato pizza before. Tots are potatoes. Right? Right. 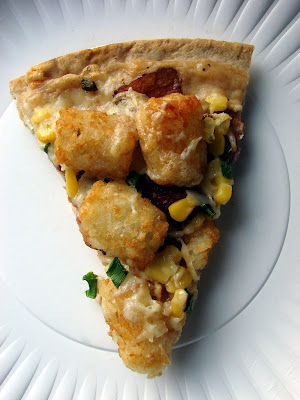 Oh. So. Right. This turned out better than I expected! Seriously. Tots rule. 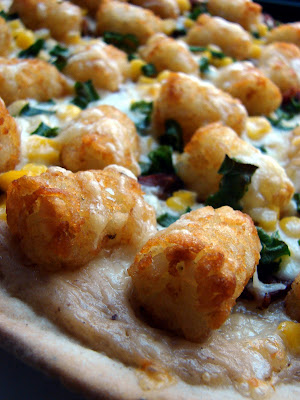 1. Preheat the oven to cook the tots according to directions.

2. In a skillet, cook the bacon until just crisp. Set aside on a paper towel, leaving the bacon grease in the pan. There should be about 3 Tablespoons. Add the flour... about an equal amount to the bacon grease (you're making a basic bechemel, with bacon grease instead of butter), stir over medium heat until it starts to turn a slightly darker brown, about 4-5 minutes.

3. Meanwhile, put the tots in the oven... let them bake for about 10 minutes.

4. Heat milk and garlic in the microwave for about a minute (watch it to make sure it doesn't boil over!). Add the milk and garlic to the bacon grease roux, and sir constantly, taking care to scrape the sides and bottom, until it thickens into a sauce, about 7 minutes. A silicone whisk works best for this. Take off heat.

5. Spread the sauce on your pizza crust. Top with tater tots, bacon, corn, cheese and green onions. Bake according to pizza crust directions. 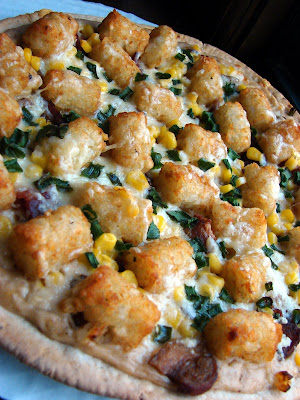 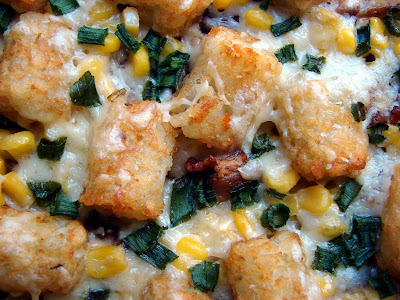 The beauty of pizza is that you can put whatever you want on it! Love the tot idea-sounds amazing! And of course bacon makes everything better!