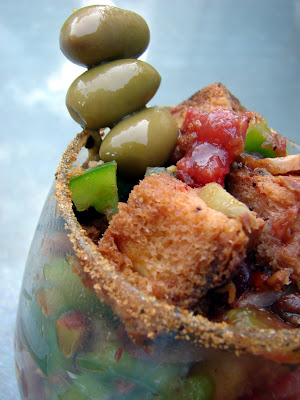 Yes! 3rd post in a row using that treasure of summertime, tomatoes! I had a couple juicy heirlooms from the farmers market that had to be eaten STAT. Also in danger of being wasted was a half loaf of bread. Panzanella, naturally, came to mind. If you are not familiar, panzanella is a salad made from stale or day-old bread. Salad made from bread!! What's not to like? They usually include tomatoes, too.

While thinking of what else to include in my panzanella, I remembered that I also have some prepared horseradish in the fridge that needs to be used. Horseradish + tomatoes = Bloody Mary! (yes, this really is how my brain works. cocktail & carb-centric). I am certainly no mixologist. In fact, I am much too lazy to make cocktails most of the time. But incorporate the flavors of a cocktail into dinner? Heck yes. 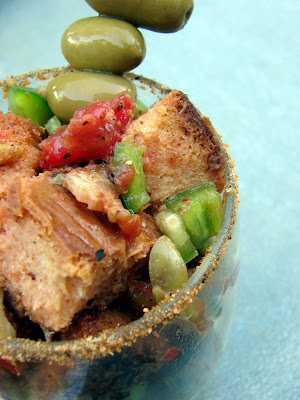 2. Cook the bacon until crispy. reserve the grease, chop up the bacon.

3. Whisk together olive oil, grated garlic, salt, pepper and 1 Tablespoon of the bacon grease. Toss the bread cubes in this oil mixture, lay out in a single layer on a cookie sheet, and bake until brown, about 15 minutes, stirring once.

4. Combine the vegetables and bacon in a large bowl. In a separate small bowl, whisk together the lemon juice, horseradish, Worcestershire, hot sauce, olive oil, and seasonings. Add the dressing to the vegetables. Once the bread cubes have cooled slightly, add them to the bowl with the vegetables and toss everything to combine 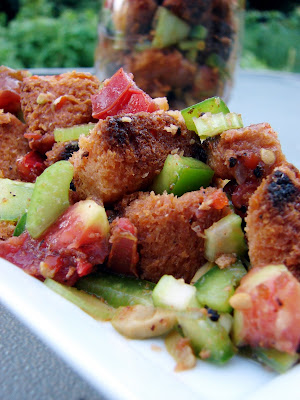