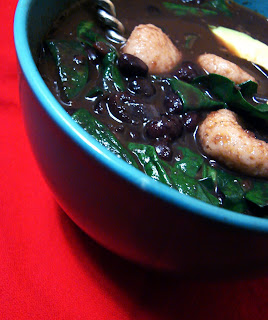 After a busy and super-fun Saturday, I wanted to use my lazy plan-free Sunday to make something slow and warming. I reached into my stack of cookbooks and pulled out the signed copy of Rick Bayless's Mexico One Plate at a Time. A quick flip thru and I landed on this recipe for chipotle beans with masa "gnocchi." It had everything I was looking for in a dish today... slow, but not complicated, used some ingredients I had in my pantry (chipotle, masa), and sounded nice, spicy and comforting. You also may have figured out by now that I am an absolute sucker for gnocchi. Now this wasn't anything like Italian potato gnocchi, but they are indeed cute little dumplings... "belly buttons" according to the book. Adorable! 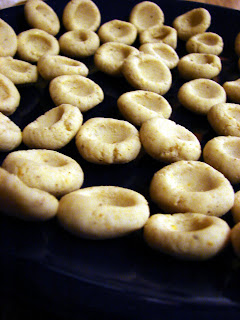 The Belly Button "Gnocchi" before I boiled them. Awwwww!

I also had some home made stock (is there any other kind of stock, really?) I wanted to use, even though the book doesn't call for it, so below is the adjusted recipe.

1. Sort through beans, making sure there is no stones or debris. Rinse. place beans in a 5-6 quart dutch oven with the onions, garlic, stock and water. Bring to a boil, then turn down heat and cook, partially covered on a slow simmer for 2 or more hours until fully tender. Taste and season with salt (keeping in mind you'll be adding the chipotles later).

2. Make the "gnocchi:" Mix the reconstituted masa with the baking powder and 1 Tablespoon of olive oil. Roll into marble-sized balls and make an indentation with your finger. Bring a pot of water to a boil, add salt to the water, turn down the heat to a simmer, add half of the dumplings and cook about 3 minutes until they are all floating. Remove with a slotted spoon to a plate. Repeat with the other half. Cover with plastic wrap if not using right away.

3. Puree the tomatoes, chipotles and about 1.5 teaspoons of salt in a food processor. Add puree to beans and let cook for about 15 minutes. Add the spinach and let it wilt. Taste and add salt to taste. Add the dumplings on top of the stew , turn off the heat and cover. Let sit 5 minutes until everything is heated through.

I put sliced avocado in when I served it. It also would have benefited from a squeeze of fresh lime and some cilantro, though it's really tasty as is.
Posted by ironstef

That sounds awesome Steph...would have loved a bowl full!