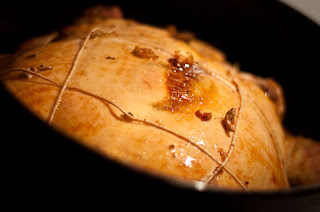 I'm not sure exactly when I had this great idea, but at some point in the last month my brother, his wife and I decided we wanted to have a Turducken party. They had bought a partial turducken last year and loved it. I have never had a turducken, but man, I sure have been fascinated with them for years. For those who aren't aware, a turducken is essentially a chicken inside a duck inside a turkey. Yes, it's ridiculous. And I just HAD to make one. Well? mark that off my bucket list, because last weekend, I built one of these monstrosities. And to save you the suspense (I was in suspense for 2 days with this bugger! I know how painful it is), it actually worked! And it was delicious! I was shocked, to tell you the truth.

One of my dinner guests was my friend Corey Woodruff and his wife, Tracy. Corey is a photographer. He is responsible for the above gorgeous photo, and others throughout this post (I will note which are his, though you'll be able to tell, because I was too covered in bird juices and sweat to take many decent ones!).

I asked a chef friend who I knew had tackled turducken before about recipes. He told me to use Paul Prudhomme's... said it was a true New Orleans turducken... Paul may have even invented the concept. Did you click that link? To the recipe? Please do.... okay now, pick your jaw up off the floor. Yes, it's an ass-ton of ingredients. Each bird gets a different stuffing! that's 3 stuffings from scratch. Yikes. I started planning and shopping a week before Turducken Sunday. On the thursday before, I baked some cornbread for the cornbread stuffing (confession time... I used box mix and added seasoning, milk and heavy cream....), and got to chopping up the bagillion veggies for all the stuffings. So many onions! My poor poor eyeballs. I had hoped to crank out one of the stuffings that night, but chopping took me late into the evening, so I packed everything up and refrigerated it until Saturday.

Saturday was a marathon day of cooking. It was THE day everything had to get done. You see, the turducken cooks at a low temp for 8 HOURS, so I had to have it ready to put in the oven first thing in the morning Sunday. OMG Deadlines! The first dressing I made was the Cornbread. Now this one calls for ground chicken gibblets. I bought gizzards and hearts at the store, thinking I could chop them up really fine. Wrong. I forgot how tough gizzards are, and I did not want my guests biting into big chunks of it. Blech! Luckily, I had found a mint condition manual meat grinder while thrifting this summer! I had yet to use it, but luckily it worked. It took awhile, but after some gory horror-film-like work, I had a plate of innardsburger. 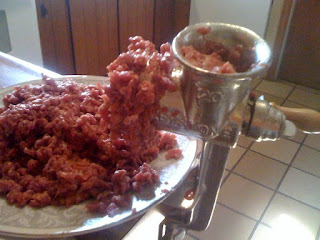 The next stuffing I made was the andouille sausage stuffing. This also called for ground smoked andouille. However, I was pretty sure my guests would not biting into little tiny cubes of spicy andouille, so I simply chopped that up. This was my favorite dressing of them all! Andouille in St. Louis is not all that easy to find. At the grocery stores they MIGHT have fresh andouille, but the smoked variety I rarely ever see. I used the handy-dandy twitter to ask where I might procure some of the real deal. Kelly tipped me off that Bob's Seafood had it, and Josh Galliano, chef at the fabulousMonarch, offered me some of his homemade stuff! I loved both options, so I got the Bob's stuff for the turducken, and Josh's I simply sliced for my guests to savor while we were waiting for the monster to cook. 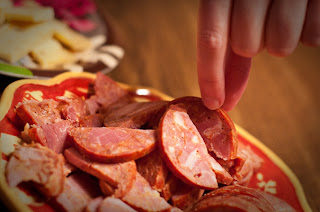 Speaking of Josh's andouille, I had to leave to go pick it up, so I left my Sister-in-law Samantha alone to make the shrimp dressing. She did great! The only tricky part about all of these Paul Prudhomme recipes is that they all call for his line of spice blends and hot sauces. I have plenty of spices, so we were just using a hot seasoned salt (Uncle Lou's Corruption), garlic powder, cayenne pepper, smoked paprika and some cumin and a couple kinds of hot sauce (louisiana hot sauce and tapatio) to flavor these to our liking.

By the afternoon, all the stuffings were made and chilling in the fridge. Now it was time to *cue scary dramatic drums* bone out the birds. I had the turkey and ducky sitting in a clean sink filled with salty water all day... my lazy way of brining them... every time I looked at them, my chest would tighten a little. Really? What was I thinking? I gotta take the bones out of a turkey?!?! *Deep Breaths* After much procrastination and watching some youtube tutorials ( this one's good. Andrew Zimmern has one, too... he's cutting the bird up so it was of no help to me, however he does say "stiff boner" with a completely straight face, therefore this vid must be linked), I just went for it. I started with the turkey, because it's the biggest, so I would be able to see and find everything a little easier. I basically tried to follow the bones with my knife and just take my time. This was HARD work, people. I broke into a sweat, and not just from nerves. Popping turkey joints out of socket takes some muskles! But I did it! The duck and chicken were a little easier because they were smaller and practice makes perfect. I will definitely be deboning chicken more often and making neat stuffings for them.

So I have these floppy boneless piles of bird flesh. Time for building!! The website has step-by-step instructions of how to build a turducken, but I kind of went a different route. I layed the turkey out, seasoned it (I had my SIL be my "clean hands"... two people is ideal for this job) and spread the cornbread stuffing in an even layer all over it, stuffing the leg cavities also. I then layed the duck on top, applied the andouille stuffing, layed the chicken on top of that and covered it with the shrimp dressing. From there it was just improvisational rolling and tucking, with the help of some skewers and extra hands and in the end some butchers twine around the whole thing.... then manoeuvred it into a giant roasting pan, fold sides down... 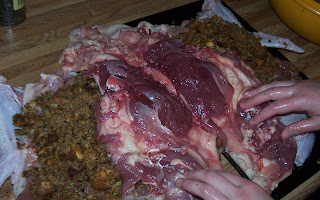 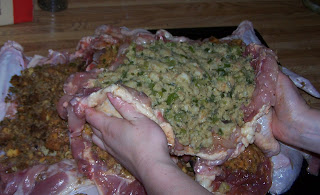 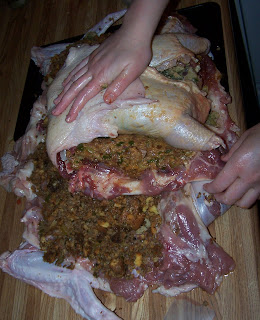 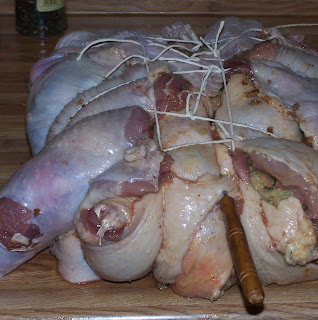 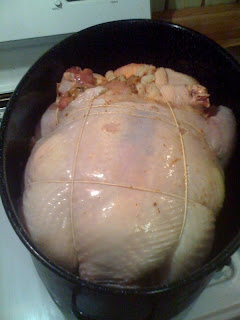 Holy Hell we just built a gosh darn TURDUCKEN!! Much excitement and paparazzi!

We finally figured out we could put it out in the garage in a giant rubbermaid container surrounded by bags of ice. Crisis averted. Time to drink copius amounts of beer and party.

The next morning I set my alarm for 7:45, got up, put the monster in a 225ºF oven, and went back to bed. At 1:30 I checked on him, and had another little panic moment because there was fluid about 1/3 up the side of the pan! Too much! I was able to ladel out most of it and reserve it for later gravy making. Then I left it alone until 4:00, except for the occasional basting (only twice), when I carefully lifted the beast from his cave. It was golden and it smelled gooood. I took his temperature, and he was well over the recommended 160ºF in the middle. Uh oh! Does that mean it'll be dry?! We'd wait and see.

After it rested for an hour, I was excited to put it on a cutting board and carve it up all nice and pretty. Did I consider how I was gonna get it out of that deep roasting pan before I started? Nope. Did I consider that my cutting board was way too small? Nope. Hmmmmm.... We rigged up a cutting board on a large cookie sheet, then my brother and I attempted to use our hands to lift the turducken out of the pan. It started to fall apart in my fingers. Crap again! Well, at least I knew it was not dry and tough! I just carved it up in the roasting pan and let people do with it would they would. 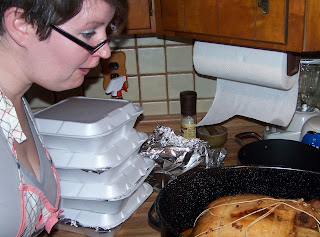 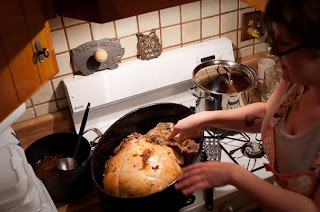 Me carving the beast. Photo by Corey Woodruff.

Instead of the sweet potato eggplant gravy in Paul's recipe, I gave up and just made a simple roux-based gravy using the drippings and stock from the bird. With three stuffings, I figured, why bother adding yet another step and flavor profile? 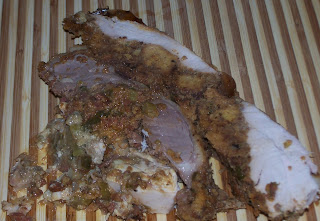 best photo of what a slice of turducken looks like. It ain't pretty. But tasty? YES!

And it was a success! It was juicy, and the flavors of all the dressings were distinct yet complimentary to each other and the meats. I couldn't believe it! My guests loved it! I loved it! So worth all the work and planning. Of course, it's really really rich, and after all the excitement, I cannot bring myself to eat any of the leftovers. Ha! All-in-all, Turducken building was a fun experience. I'm glad to have it under my culinary belt (I say as my stomach rolls over my actual belt). Phew. Wait... one more thing... I MADE A DAMN TURDUCKEN!!! ridiculous.

Got any leftovers? I'm dying here.

Dammit Woody! I coulda given you some when you came and got your chairs!!

I just watched Paul Prudhomme and his helpers make a turducken on Create TV today. (He is REALLY short!) It seems like an awful lot of work. They had three professional chefs working on it, and it still looked labor intensive. Good work!

Seeing some of these pictures is like looking at a horror film! Example: the raw meat pictures.

It's amazing that something so crazy could be so delicious.

My husband and I have tackled the turducken twice and it is a LOT of work. We did it a little differently though. We put the duck in the center and the chicken in the middle -- more of a turchuck really, but that sounds horrid. And we used an Asian wild rice stuffing for the duck.

Good job, Stef! I have never tackled the turducken, but have boned me a few chickens in my time. There is something just yummily delectable about that stuffed, boned poultry.

My hat is off to you!

Congratulations on making this "monster."