Meet my good friend Eric. He is a musician, poet, bowler, social media guru, mexican food lover and all around cool dude. That's why when he asked me to go to Nashville with him to see one of his favorite bands, The Damnwells (and you should really click this link and check them out... they're latest album is a FREE download, and it is awesome!), play live, I was totally game. I love me a good road trip! 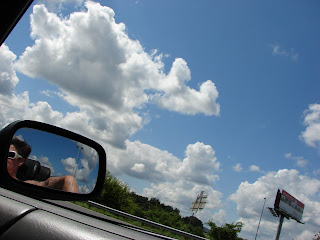 Did I mention he has a convertible? 'Cause he does. Which helped when he added Birmingham to the road trip, to see the Damnwells 2 nights in a row! And while we're at it, let's hit Memphis on the way back to St. Louis! See? EPIC.

First Step, Nashville Tennessee. Eric was hoping to hit places that his favorite food network show, Diners Drive-Ins and Dives has been to, but they didn't seem to have been to Nashville yet. I did some research, however, and found this clip from a Bobby Flay show. Hot Chickens! Apparently a Nashville thing, consisting of fried chicken covered with scorching hot sauce, served on bread with pickles on top. The show highlights two places, Hot Chickens.com (which oddly is not an actual URL for the restaurant) and Prince's Hot Chicken. We tried to find Hot Chickens.com first, because they had a wall of fame, and I knew Eric could take the heat and get himself on it. We couldn't find it, though! It's either been replaced by a Mexican place or we had the wrong address. So we went to Princes. 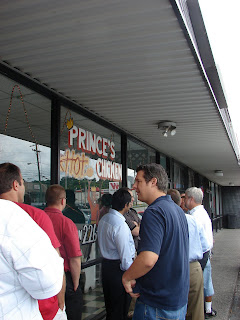 When we arrived there it was about 5 minutes from opening, and there was already a line outside waiting to get in. Good sign! 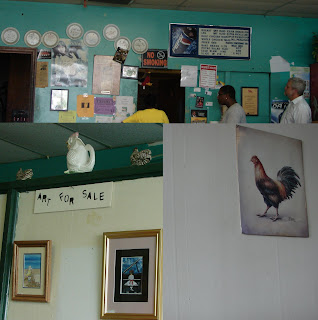 The place is not the best-looking joint... in a run-down strip-mall, the decor consisting of a hodge-podge of cheaply framed chicken artwork hung haphazardly on the bright teal walls, and styrofoam plates signed by who-knows what celebrities stapled to the wall above the ordering/pick-up window. I grabbed an uncomfortable booth while Eric went to order. 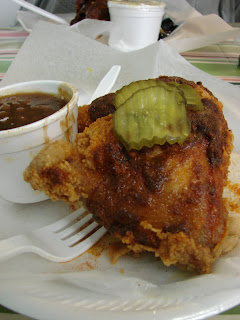 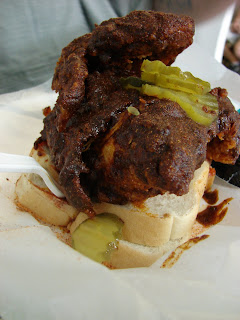 and he got the Xtra hot breast.

It was slow-going for me, as the spicy sauce combined with the warmth of the room and made it almost dizzying. Eric took down the extra hot like a champ, even though there was no wall of fame.... he did it... just to be macho? :) The boy is addicted to heat, for real. 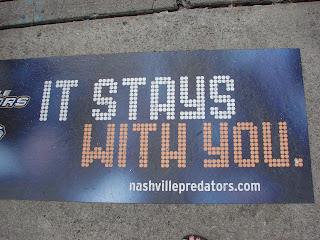 Later when walking downtown we saw this ad that said exactly what Eric had been saying all day after Prince's Hot Chicken. Ha! So, It was good fried chicken... I would recommend milder than the medium-hot, though, for maximum chicken enjoyment.... although getting sweaty while eating is fun, too. 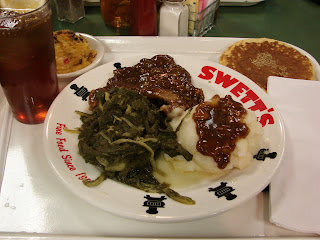 For dinner in Nashville, our friend Woody insisted that we hit up Swett's. Woody is an eater and a drummer who has traveled, so we trust his advice and go to this soul-food cafeteria. A place with lots of seating, where you grab a tray and go through a line where a woman who calls everyone "honey" serves you up your choice of southern favorites...mmmm... greens. Good call, Woody!

That night the Damnwells put on a damn fine show in a small basement venue (called the Basement, of course). The next morning we hit the road for Birmingham, Alabama. About 45 minutes on the road, we prepared to stop for gas, and noticed signs directing us to none other than the Jack Daniels Distillery. It was about a half-hour detour, and completely unplanned, but we could not resist! Worth it! Our tour guide was so southern and so awesome. 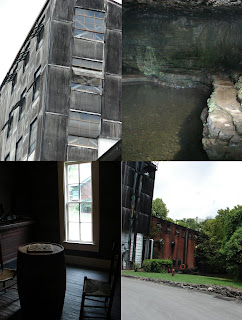 The distillery is on very pictureque grounds, rustic yet clean... streams, woods, old old buildings. And oh the smell. Even the super-strong vapors from the mash had us craving a sip of whiskey. 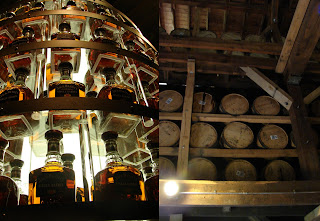 Unfortunately, the distillery is in a Dry County... as in they are not allowed to serve alchol. Crazy! We did find an ice cream place in the quaint, though tourist-trappy historic ynchberg that had Jack-Daniels and raisin ice cream and Jack Daniels whiskey sauce... something I will be recreating because... yummmm. 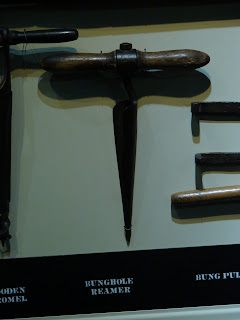 I will never stop laughing about this.

And whiskey-less we headed to Birmingham! 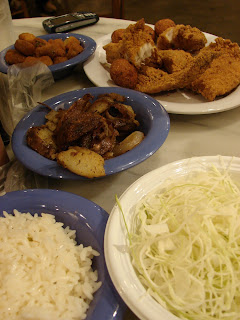 For dinner in B-ham we took Rachel's advice and hit the Fish Market downtown. The Fish Market is an interesting place... Part gourmet grocery store, part fish market, part restaurant. The restaurant part took a sec to figure out... there are no waiters... you order and sit down and wait for your pager to go off to pick up your food. However, there are busser-type people who will take your pager from you and bring your food to the table for you. And the food? We were expecting Greek, but it was more of a mix of Greek and traditional southern. My greek Scallop soup came with hush puppies! All in all a fun place! 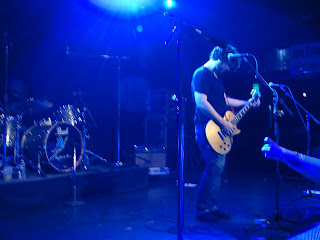 The next morning we visited the Birmingham Civil Rights museum, (recommended!!) then hit the highways again for Memphis. Finally, we would get to go to a Diners, Drive-Ins and Dives Destination. 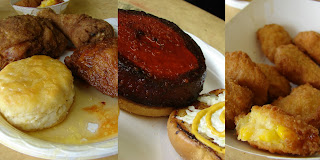 Uncle Lou's! Another run-down strip mall place with big eats. I got some fried chicken in the 3 different flavors, the most famous being Uncle Lou's Sweet and Spicy Love sauce. Eric got a hot fried Balogna sandwich with was quite intimidating! Sweet corn fritters rounded out the meal. 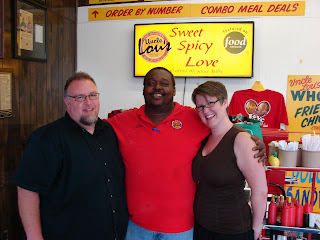 Everything tasted great, and we even got to meet Uncle Lou! Oh, Uncle Lou is all about being famous. He was LOVING it!

This was our only Damnwells-free night of the trip, so we basically hung out on Beale Street all day. Over-priced too-sweet drinks, but GREAT people watching! Some good music, too! 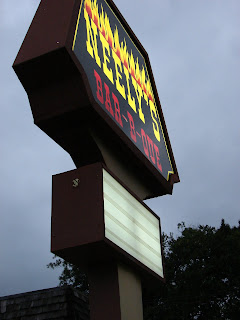 For dinner we couldn't resist a trip to Neely's BBQ. Yup, another Food Network favorite. We ordered a sampler meal for two that had the smoked turkey, ribs, and brisket... a huge plate of meat basically. The best part of the meal was the peach cobbler.... soooo buttery. I'm not a huge cobbler fan... rather I wasn't until I had this one. 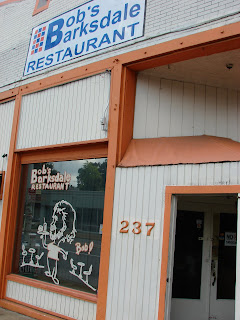 Before Leaving Memphis and concluding our Epic Road Trip, we were DETERMINED to find a good breakfast place. When we asked the front desk at our hotel in Birmingham for a good local place, were told IHOP or Waffle House!! Outrageous! Luckily in Memphis we found Bob's, and got a proper Southern breakfast finally to the trip! 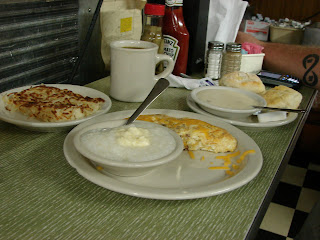 How does one wrap up an epic blog post about an epic road trip in the South? Hmmmm...

That was a FANTASTIC recap of a truly EpicRoadrtip, glad I was able to share it with you.

LOL, we did this trip last fall, but in reverse order - Carbondale to Memphis to Oxford,MS to B'ham to Nashville and back to C'dale. The mid-South has some great places to eat and we've barely scratched the surface! I'm ready to go eatin' up the road anytime.

Great recap! Chris and I really enjoyed going on your roadtrip with y'all via Twitter. I'm glad you enjoyed Bham and I hope you guys come back sometime!!

By the way - that xtra hot chicken makes me sick just looking at it - OH MY. My mouth would melt.

Isn't The Basement fun? I'll be there (Nashville) in a few weeks for the Americana Music Fest, and that is one of the venues we always go to. I wish those Damnwells were going to be there during that. (There's an amazing music store above it, too.) I'd love to go to that Prince's place, but we just stay downtown and don't have a car, so...