I got a few Mark Bittman cookbooks from the Library recently. I saw a couple of his New York Times article/recipes, and thought I'd check out his books. I really enjoy flipping through The Best Recipes in The World, and I may just purchase it. Tons of recipes from all over, and they look pretty darn tasty and for the most part, simple.

Last night I tried a recipe from The Minimalist Cooks Dinner. It was for Stir-fried Coconut Noodles. I pretty much followed it exactly, except I couldn't find the fetuccine style rice noodles, so I used the thin ones, and I flavored the vegetables while I was cooking them with some soy sauce, fish sauce and red pepper flakes. It turned out pretty good. Not as flavorful as I'd hoped, but I guess this recipe is more about the taste of the ingredients than any spices...the coconut and the pork are both very rich, while the bell pepper ads sweetness and the eggplant a little bitterness. I added some soy sauce and sriracha to mine, but Jack liked his fine with just the Nam pla, black pepper and cilantro.

1) Soak the noodles in very hot water to cover until you're ready to add them to the stir-fry.

2)Meanwhile, pour 1 tablespoon of the oil into a large skillet or wok, turn the heat to high, and heat for a minute. Add the meat and cook, stirring occasionally, until it browns and loses it's raw look, about 5 minutes. Remove with a slotted spoon and set aside.

3)Add another 1 tablespoon oil to the skillet, followed by the bell pepper and eggplant. Cook over medium-high heat, stirring occasionaly, until the pepper and eggplant are browned and tender, about 10 minutes. Remove with a slotted spoon and combine with meat.

4) Add the remaining 1 tablespoon of oil, followed immediately by the garlic and cook for about 30 seconds. Add the coconut milk. Cook over medium-high heat, stirring and scraping with a wooden spoon, for about a minute. Drain the noodles and add along with the meat and vegetables. Cook until the noodles absorb most of the coconut milk, about 3 minutes.

5) Season with nam pla, soy sauce or salt to taste, then add plenty of black pepper. Garnish with cilantro and serve.


and here's the finished product: 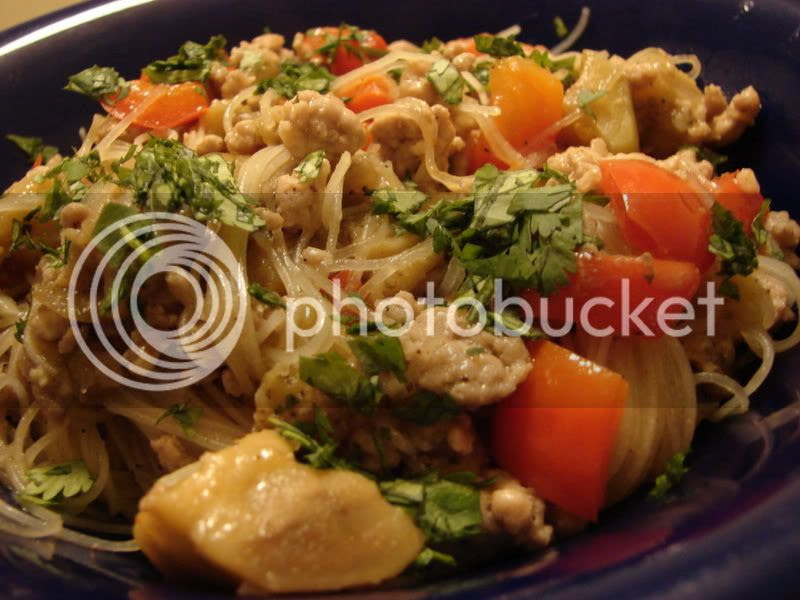