i'm thankful for chocolate and Nigella

I hope everyone had a great Thanksgiving. I had several family gatherings with lots of yummy food. On Thanksgiving I was to bring a dessert other than pie...Preferably chocolate. I decided to make Nigella's Triple Chocolate Brownies from Nigella Feasts. I have never made brownies from scratch...the box stuff is usually a crowd pleaser. But the recipe looked awesome, and I've been building up my baking skills little by little lately, so I gave 'em a shot. They were pretty easy to make...and they turned out AWESOME if I do say so myself. Actually, Jack said they were the best brownies he's ever had, so take his word for it. He doesn't say stuff like that unless he means it. Here's some brownie porn: 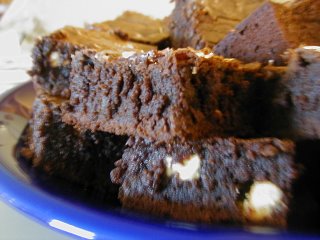 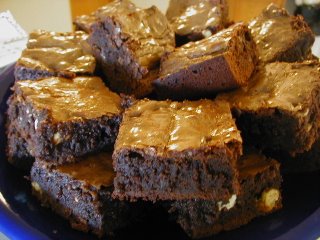 Yeah, they are wonderful brownies. Super-duper rich (with 3 sticks of butter, 6 eggs and 3 kinds of chocolate, what do you expect?!?), and I'll definitely make them again for a special occasion. And I'm not allowed to make my usual Krusteaz Fat-Free brownies with stuff added again...after Nigella's recipe, those just won't do.
Posted by ironstef