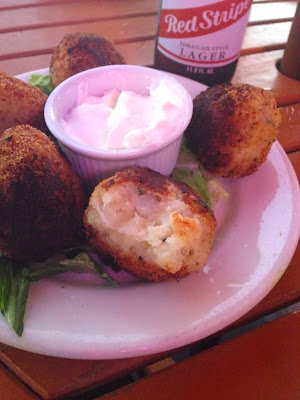 Need a good Jamaican fix to say goodbye to summer in St. Louis? No Problem! De Palm Tree is located on Olive Blvd. in Olivette. It is in the same strip mall as my favorite Pho joint, Pho Long. So basically, the best strip mall ever... the most delicious, anyway. 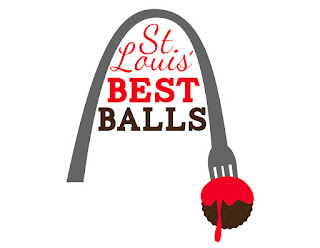 De Palm Tree's made-from-scratch food is full of flavor. The goat curry and the black bean stew are hearty and taste like they've been cooking all day... lots of depth. While summer is ending, I think this Jamaican fare would work well as warming comfort food in the winter quite well. Good thing my new house is less than 2 miles away from this magical strip mall! 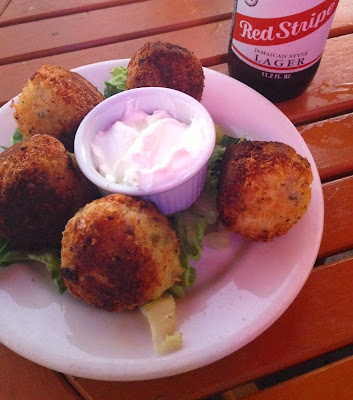 You may remember that I made potato cod balls for a tapas-themed party over the summer. I was excited to see these balls on De Palm Tree's menu so I could compare. De Palm Tree's had small hunks of potato in them, instead of being completely smooth, and were much larger than mine. They were both fluffy and creamy at the same time, with just enough cod to flavor the potatoes without being too fishy. Fantastic balls, mon! 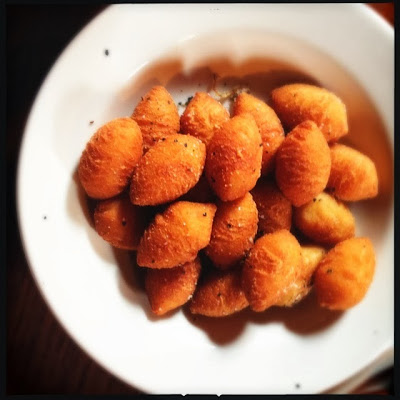 Morgan Street Brewery also has potato-based balls. These are Fried Mashed Potato Balls, and they are brilliant when you are downing their Sunday $2 pints and playing shuffleboard on a rainy afternoon. I don't hear much about Morgan Street Brewery, and I always assumed it was more of a partier's brewery/bar. When I was reading Evan Benn's St. Louis beer book, Brew in the Lou, I noticed a lot of the city's top brewmasters named Morgan Street's Golden Pilsner as one of their favorite or most influential St. Louis beers. Respect! And they have creamy hot salty balls, too! Check them out some Sunday (or any day... I just like Sundays because the beers are only $2 and I like a good bargain)! 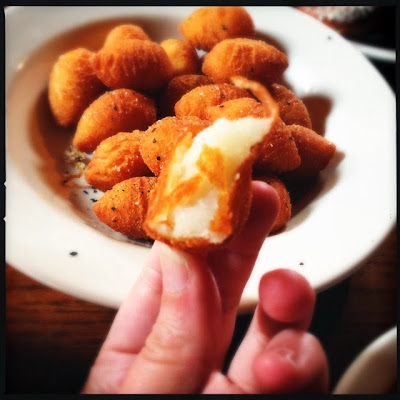 I haven't had the balls at Jamaican Palm Tree, but we've been there before and loved it! (and yes, agree that Pho Long has the best Pho!!)