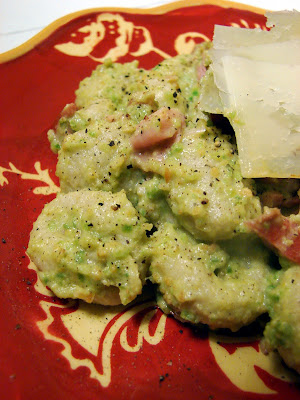 One of my favorite hangouts is a pub called the Bleeding Deacon here in St. Louis. They have an awesome jukebox, good beer selection, comfy, friendly feel and good food. One of their appetizers is grilled chicken served with a jalapeno-peanut pesto. Yum! I thought that was a brilliant idea for a pesto, and decided to try making something similar at home.

But what to serve it with? I thought it would be fun to do a Mexican play on gnocchi, just as the pesto is a Mexican-influenced version of Italian pesto. Thanks to the Rick Bayless recipe I made last month, I knew just the thing. Masa Gnochhi! This time, however I added an egg to the dough, in an attempt to make the gnocchi less dense. It worked! I bought some smoked chicken thighs and used the meat from those as my protein and added flavor for this dish.

The pesto recipe makes much more than you will need for this dish, but it would also just be good as a dipping salsa! 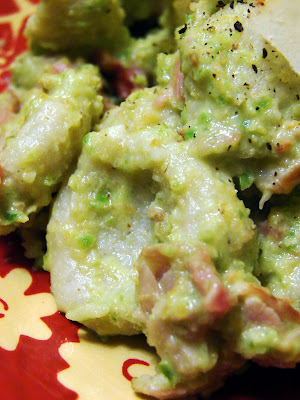 Pulse the peppers, garlic and peanuts in a food processor until a paste starts to form. Drizzle in lime juice while processor is running. Slowly drizzle in oil until a desired consistency is reached. add salt to season.

Mix masa and water well. Add baking soda, oil and egg. Combine to form a slightly sticky dough. With floured hands, roll dough into marble-sized balls and press with a finger to indent.

Cook gnocchi in salted boiling water for about 5-7 minutes. Reserve some of the cooking water. Drain.

Combine gnocchi, the chopped meat from 2 smoked chicken thighs, 3/4 cups of the pesto in a pan and gently combine over medium heat, adding the gnocchi cooking water to thin out sauce, until heated through. Serve with shredded Manchego cheese. 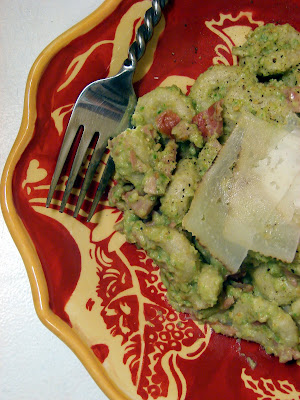 This sounds amazing, Stef. Will have to try it soon!

This is brilliant! I'm dairy-free and my mother is gluten, dairy, tomato, beef, bacon (and it goes on) free, and I never would have thought to find a gnocchi recipe that I could make for her, much less and accompanying sauce!

Might be a bit tricky to find masa flour in Australia, as we lack the Mexican influence in the eating world, but I'm going to try!

(Oh, and sub the peanuts for something like cashews, because she's allergic to those too :P)

I found this recipe when I was searching for a peanut pesto, and it was super inspiring! I didn't have all the ingredients, so I used the peanuts, regular bell pepper, ancho chiles, a little piece of fennel and fennel fronds. Huge hit! I cooked mine into some reduced fat-free half and half for a creamy sauce. Amazing. Thanks so much for the idea!!