Just in case you don't follow me on twitter, here are some other projects I have been working on/involved in recently....

• I've mentioned Food Blog Mafia. Well a couple of weeks ago, I was given some Balut, and coerced Kelly's fiance Jerad into trying them with me. Kelly took video... here is the post on the Food Blog Mafia Blog. So very Andrew Zimmern. 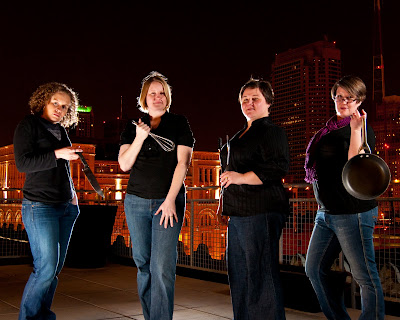 • Also, in Mafia news, my friend Corey Woodruff took some awesome pictures of us! Check out his blog post about the shoot. It's so fantastic to bad-ass professional photos on our about page.

• I also had the pleasure to attend this years second Church of Burger meet-up. The Church of Burger is the brainchild of blogger Andrew Veety. He polled St. Louisans to see what their favorite burger was in town, and every month of 2010, he and his clergy will visit one of the places and try the burger and judge it. Fun, right? But controversy broke out over some of the negative tweets! Is it fair to publicly review a restaurant negatively? My fellow mafia member Kelli covered the controversy in this post. What do you think? Weigh in with a comment! For more insight and info on the drama, the Riverfront Times' Robin Wheeler also wrote a good article with additional comments from the parties involved.

• And, because I am ridiculously addicted to the Internet, I started yet another blog... this one is for all my other hobbies outside of food, called Daydream Believer.

• And you didn't forget about Skank Ham, did you? :)
Posted by ironstef