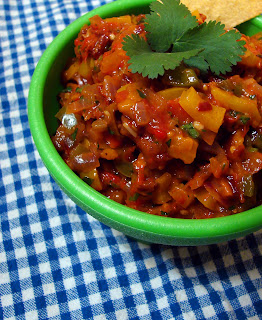 Last night I had Nachos and margaritas for dinner. I wanted to make salsa from scratch to go on said nachos, but it's wintertime! There are no good tomatoes for making fresh salsa! So I used jarred salsa, and while good (it's hard to make BAD nachos), I kept thinking about how I could make a decent salsa in the dead of winter. I knew chipotles would be involved... I just always seem to have them on hand.

For the tomatoes, I had planned to used some good canned ones, but while in the produce department I spotted the tiny grape and cherry tomatoes. While big tomatoes in the winter are inedible, tiny tomatoes tend to be pretty good all year round. And whatever flaws they may have, I would discount by roasting them. Yes! roasted vegetables! Perfect for winter!

I also decided this salsa needed to be colorful, to chase away the cold gray weather blues. So I used 4 different colors of bell peppers. I have seen orange and chipotle paired up in other recipes, so I thought I'd give it a try here. Orange=sunshine,after all. The result is a smokey, spicy, bright and slightly sweet salsa. Take that, winter! 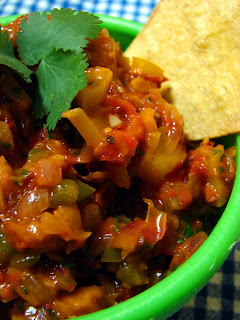 1. Cut 2 of the bell peppers into large chunks. Toss those, the tomatoes and the garlic cloves in a couple Tablespoons of olive oil and some salt and pepper and spread out on a cookie sheet lined with foil. Roast in a pre-heated 400ºF oven for about 40 minutes, stirring gently halfway through, until the vegetables have some nice brown and black spots. remove from oven and let cool.

2. Chop the other 2 bell peppers up finely. Saute in about 1 Tablespoon of olive oil along with the onion and shallot for about a minute. Finely chop the chipotles and add them to the pan, along with 1-2 Tablespoons of the adobo sauce. Let cook until the vegetables just start to soften. Zest the orange and put zest aside. Slice the orange in half and squeeze it's juice into the chipotle mixture. Stir then remove from heat. Stir in the orange zest.

3. Chop up the roasted vegetables. Add them and their juices to the chipotle mixture. Combine well, taste for seasoning, and add a handful of finely chopped cilantro. Let cool completely and serve.

Huh, this would be great for the upcoming Superbowl! For more awesome recipes for the big game, check out the post I did for Food Blog Mafia on party foods.

Speaking of FBM, We got our photos taken!! My friend Corey Woodruff is an AWESOME photographer. We had lots of fun on the shoot. Here is Corey's blog post about it, and here are all the resulting pics.

Great idea for a winter salsa! May just have to do a spin on this for the big superbowl weekend...excellent timing, thanks!!

i love nachos too and am always looking for a new salsa recipe. made some today:) i too have been suffering with tomatoes out of season - yuck!