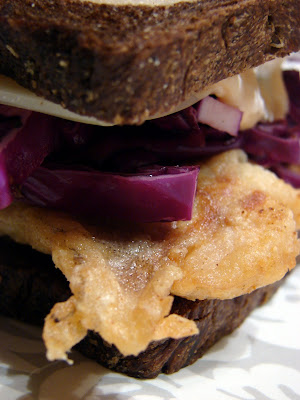 For a few weeks a friend of mine has been obsessing over a sandwich he read about... a fish Reuben, supposedly served by one of the 2 Schlafly beer brewery restaurants. First we went to the Bottleworks, which we learned does not even have a fryer, so, no, they did not have a fish Reuben. So we went the Tap Room, which has fish and chips, but no fish Reuben. Apparently the elusive sandwich was only available at the brewery's Cask and Cod festival, held almost a month ago. *sad trombone*

Not liking to see people disappointed, I told my friend I would make him a fish Reuben. At first, this was a genuine act of "I want to make this person happy." Then I thought about how to go about making the sandwich and realized it would hold some challenges for me. One major challenge, actually. Reubens have Thousand Island dressing on them. Thousand Island dressing is made from mayonnaise. Mayonnaise makes me gag. But, I have been meaning to challenge my distaste for this culinary teacher's pet. "Foodies" are supposed to like mayonnaise, right? I've long believed that if I made my own mayo, I might come around and see what the appeal is. I've had this post from Ruhlman in the back of my mind for a quite some time. Egg yolk, oil, lemon juice, salt... what was I so grossed out by? Sounds like a good combo when you put it that way. So this Reuben was a good excuse to make and try mayonnaise in it's best form (then defile it with ketchup, sweet relish, etc....) 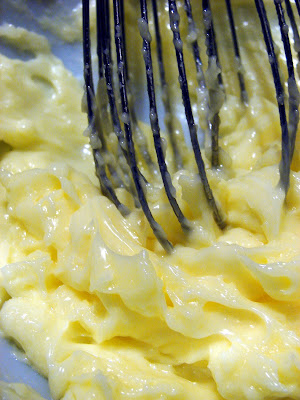 So I made mayo. It was easy! I used 2 teaspoons of lemon juice instead of a water and lemon juice combo... thought the lemon would make it more pleasing for me.... plus, it was going on a fish sandwich. And you know what? It was pretty good! I stuck my finger in the final product and licked it off with no heaving. It's super rich, slightly tangy... mayonnaise... it's fine. Can we stop talking about it now and move on already?!

Combine the first 5 ingredients. add the cabbage and mix well. Set aside.

Combine egg yolk, lemon juice and some salt. Whisk in oil very slowly, starting with a few drops at a time, and gradually a slow steady stream, whisking the whole time, until all oil is used and mayo comes together. Add the rest of the ingredients and stir to combine. set aside

Mix the spices and flour together well. Dredge the fish fillets in the seasoned flour and shake off excess. Fry on both sides in about 1/4 inch of hot oil, about 2-3 minutes per side, until golden on the outside and flaky on the inside. Drain on a plate lined with paper towels. 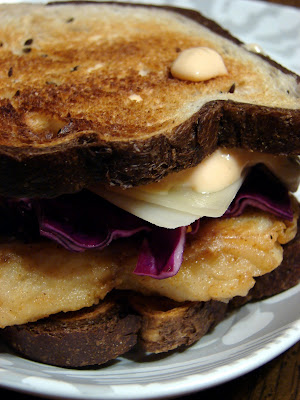 I've never been a mayo fan either. Maybe I'll have to try making my own too. The reuben looks looks fantastic.

I like mayonnaise OK but the stuff you buy in the supermarket isn't all that hot (not even Hellman's, which is by far the best of class). Homemade mayo is great, though. I like to make mine with half olive oil, half vegetable. It has a lot more flavor; but you do have to like olive oil, otherwise that's a no-go.

Your slaw recipe looks good. I love caraway seeds in coleslaw. I almost never make coleslaw - I like it, but not in any quantity, so it's easier just to buy it from Straub's when I'm craving some. But I'll probably give your recipe a whirl sometime during barbecue season.

When I was a waitress, I once had a guest ask for ketchup and mayo to mix together since we didn't have 1,000 island. I still gag just thinking about it.