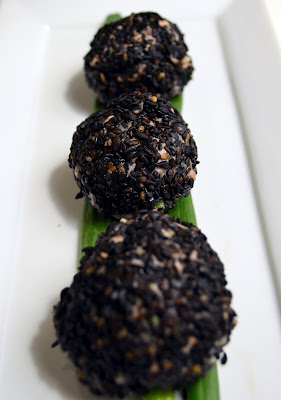 Last year Kelly had an anti-Valentine's Day dinner party. We were instructed to bring foods that were bitter, stinky, frightening or just plain naughty. She also made us kill our own lobsters! It was such a fun time that she decided to have it again this year.
Knowing that I have declared 2012 the Year of the Balls, she suggested this recipe that she had found for salmon balls with black sesame seeds. I was all over it like... black sesame seeds on salmon balls. These things are so neat looking! Sinister yet gorgeous. And they tasted good! Salty, nutty, fresh... everything I look for in balls... :p
This recipe made 24. I served them chilled, and ate the leftovers over steamed rice. 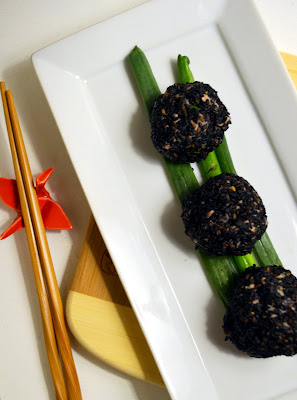 Spread the salmon cubes on a plate and freeze for 15 minutes. Transfer the salmon to a food processor. Add the water chestnuts, egg white, cornstarch, wasabi, three-fourths of the scallions, 1 1/2 teaspoons of the ginger, 2 teaspoons of kosher salt and a pinch of pepper. Pulse 4 or 5 times, until the salmon is chopped and the mixture just comes together. Transfer to a bowl.

Spread the sesame seeds on a plate. Scoop the salmon mixture into mounds of 2 tablespoons each and roll into 24 balls. Roll the balls in the seeds and transfer to 2 glass pie plates. Set one of the plates in a large steamer. Steam the salmon balls over boiling water until firm, about 6 minutes. Repeat with the remaining salmon balls.

Meanwhile, in a bowl, combine the vinegar, soy sauce and sesame oil with the remaining scallions and ginger. Serve the salmon balls with the dipping sauce. 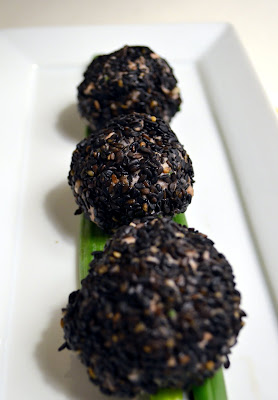