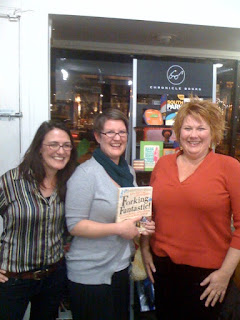 Remember how I was contacted by the authors of the new cookbook Forking Fantastic? Well a couple weeks ago Zora and Tamara came to the Lou to do a little reading and discussion of the book and sign some books. I skipped my bowling league night (and it's 8 for $20 whiskey sours) to go, because having chatted with them a bit on twitter and such, I felt I just had to meet these crazy ladies. I'm glad I did! They are so genuine and nice and hilarious. I really really want to go to one of their infamous Sunday Dinners in New York sometime (girls, maybe you could do a St. Louis theme! We have all kinds of regional specialties.... toasted ravioli, gooey butter cake, st. paul sandwiches, pork steaks.... I'll bring the Dad's cookies!!)

I went to the signing with a friend of mine who is a vegetarian (see? I'm open-minded!), and during the Q&A part, he asked how they deal with veg guests at dinner parties. It was then they revealed that there is a top-secret vegetarian chapter in the book which their editor insisted they include. Now, a lot of the recipes in the book are side dishes that can easily be made veg. They said there's never a problem at the dinner parties, because they serve family style, so people can take what they want, and there is always 2 or 3 vegetarian friendly dishes. But you know editors (no... no I don't, but I can pretend)... they want to make sure books are hip and trendy and have appeal to all sorts of people. So they came up with a few more recipes to make this chapter. As an excuse to post the photo of me with Zora and Tamara, I made one of those vegetarian recipes. My favorite part of this recipe? BACON is an "optional" ingredient. Ha!!! 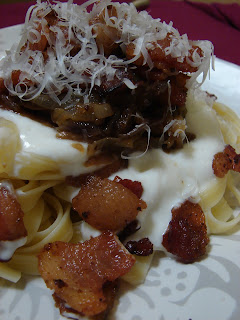 And since you should get the book, I won't quite post a recipe.... not that this dish NEEDS an actual recipe. It's so simple. I had my brother and sister over for dinner that night and they asked me about 5 times "what is this sauce again?" "It's just yogurt," I would respond every time. They couldn't wrap their heads around it. But yes, yogurt... they recommend the thick creamy awesomeness that is Greek yogurt, but my grocery store did not have that, so I used regular plain yogurt, which I let drain through paper towels in a colander while I prepared the rest of the components.

The components? Caramelized onions (I used 4.... 2 red and 2 yellow, sliced thin, cooked over medium-low heat with a bit of oil in 2 batches, making sure not to scorch them, but to cook them nice and slowly so they were soft and brown, not crispy or black... there are great instructions for this in the book...), bacon (in cut into small pieces and cooked with some grated garlic) and parmesan cheese. Cook some fettucine, add about 1/4 cup of the pasta cooking water to your yogurt, top the fettucine with yogurt, onions, bacon and cheese. Boom... a really rich and yummy dinner! With the added bonus of filling your home with 2 of the best smells in the world... caramelizing onions and bacon. And yes, that sauce? It's just plain yogurt!! Crazy!