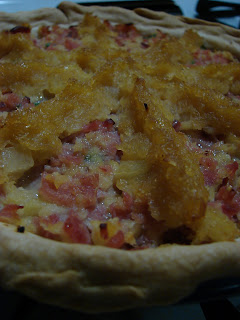 After a hectic day at work, I wanted to come home and make something easy yet comforting... and yes, a little bit trashy. I wanted to make a casserole. In my collection of Better Homes & Gardens cookbooks from the 60's and 70's I had my answer. Behold the Casserole Cookbook from 1968. I have used this particular cookbook before with success. 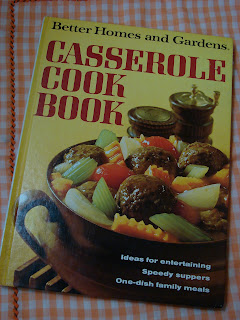 Browsing through it for something that had a touch of kitsch but did not involve velveeta or condensed cream of mushroom soup, I found "Hawaiian Ham Pie." HAM PIE?!?! yes please. Not only did this satiate my need for an easy casserole, it also is the PERFECT way to introduce you to a new web comic I've started.

Skank Ham is her name, and smokin' and partying is her game! I actually came up with Skank Ham years ago, and just recently was reminded of her and decided to give her a blog. People seem to like her. She already has more than 100 followers on Twitter :)

So, yes, Ham Pie is VERY much up Skank Ham's alley. I changed a few things (added garlic, but of course, for instance...), but I'm pretty sure this would have been a good pie either way. Yes, believe it or not something called Ham Pie is quite tasty! The "spokes" of sweet caramelized pineapple and brown sugar on top contrasted perfectly with the salty ham. 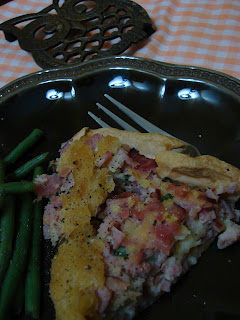 2. cook garlic and shallot in olive oil in a skillet until just starting to brown. let cool a bit.

3. Combine the ham, garlic and shallot mixture, bread crumbs, egg, milk, green onion and 1/2 cup of pineapple in a bowl and spread it into the pie crust.

4. combine the remaining pineapple with the brown sugar, and arrange the mixture in a spoke patter on top of the pie. Bake in a pre-heated 350ºF oven for 45-50 minutes until everything looks set and the crust is golden brown. Allow to cool about 10-15 minutes before serving. 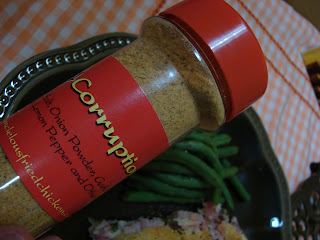 I served this with green beans which, keeping with the Skank Ham theme, "corrupted" with Corruption seasoning that I got at Uncle Lou's in Memphis, TN.

So there you have it, a very proper introduction to Skank Ham. Happy Skanking and Happy Porking!!
Posted by ironstef

Well, I might not eat that due to the skanky ham and my aversion to eating it, but I'll sure skank to that!

I didn't think anything edible came from "Better Homes and Gardens" in that era. Some of my worst Throwback recipes originated in those books.

Despite my aversion to all things pork, I commend you on giving a Better Homes and Gardens recipe book a go! I tend to avoid them because, like a previous commenter stated, some bad recipes have come from there. Perhaps I need to re-evaluate my opinion!!